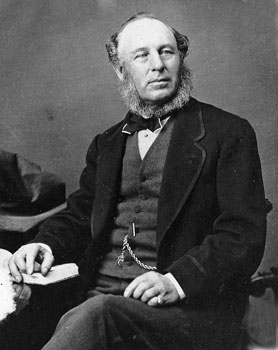 Sir Adams George Archibald was a strong proponent of Confederation, which he urged Nova Scotia to join. As lieutenant-governor of Manitoba and the North-West Territories, he helped lay the foundation for such civil institutions as courts of law and the education system in a burgeoning province.

Adams George Archibald was born in Truro, Nova Scotia, and studied at Pictou Academy, a non-sectarian school that specialized in liberal science education. Archibald studied science under Thomas McCulloch, one of the most prominent educators and theologians in the Maritimes. He moved to Halifax as a young man and began to study medicine but soon changed directions and trained as a lawyer. Archibald earned his commission as a notary public in 1836 before being called to the Bar in Prince Edward Island (1838) and in Nova Scotia (1839). He opened a law office in Truro and sought a career in politics, becoming a justice of the peace in 1836 and a judge in 1848. In 1849, he was appointed to help oversee the building of the telegraph linking Halifax to New Brunswick.

He married Elizabeth Burnyeat in 1843; the couple had three girls and one boy.

In 1851, Adams George Archibald set aside his legal career to enter politics and won the Colchester County seat for Joseph Howe’s Reform party (later the Liberal Party). Six other members of the Archibald family had previously held seats in the Nova Scotia House of Assembly.

Unlike many of his colleagues, Archibald spoke quietly in Assembly, relying on solid arguments rather than theatrics to make his case. His position on issues did not always align with Liberal Party views. Unlike Joseph Howe and other Liberals, he supported a reciprocity agreement with the United States. In 1851, he opposed the party’s attempt to change qualifications for the vote, preferring the existing 40-shilling freehold provision, in which men had to own property or assets of that value before they could vote.

In 1854, Archibald opposed universal male suffrage, which had been introduced by Conservative leader James William Johnston. That year, Nova Scotia became the first British North American colony to introduce universal male suffrage (this did not, however, include Aboriginal males or persons “receiving financial assistance from government”). In 1863, Archibald introduced a motion to reinstate a property requirement for voting — it was not passed.

After serving as solicitor general (1856–57) and attorney general (1860–63) in the Nova Scotia Assembly, Archibald succeeded Joseph Howe as provincial Liberal leader in 1863. While serving in opposition, he found common ground with Conservative Premier Charles Tupper in supporting free compulsory education. (Archibald had helped establish a normal school in Truro in 1854 and believed firmly in the value of education.)

Adams George Archibald was a strong supporter of Confederation and, at Charles Tupper’s invitation, attended the Charlottetown Conference in September 1864, where the idea was first proposed to the Maritime colonies. He went on to attend the Québec Conference the following month. As the financial expert of the Nova Scotia delegation, Archibald tried to sell the Québec Resolutions to Nova Scotians and was the sole Liberal in the House of Assembly to support the Resolutions. Archibald stood behind the belief that provincial legislatures ought to retain their shape following Confederation; the Resolutions provided for a federal union where the interests of regions and minority populations could be defended. Archibald later attended the London Conference (December 1866).

In 1866, Archibald publicly defended Confederation against the attacks of Joseph Howe and William Annand, its most prominent detractors in Nova Scotia. While he did not agree with all of the financial terms of union, he accepted them, arguing in the legislature that the province would be able to gain concessions from the federal government once Confederation was established.

Archibald’s contributions to Confederation were recognized in 1867, when he was appointed to Sir John A. Macdonald’s federal Cabinet as secretary of state. He lost his seat in the 1867 election to anti-Confederate Archibald McLelan and resigned in a wave of Nova Scotian opposition to Confederation, but retained his portfolio until April 1868.

After Joseph Howe joined Macdonald’s government in 1869, sentiment towards Confederation shifted in Nova Scotia. Archibald won the federal seat in Colchester County in an 1869 by-election after McLelan was appointed to the Senate.

Adams George Archibald spoke often during House of Commons debates on the Manitoba Bill, which aimed to bring the newly acquired territory into Canada. In 1870, Archibald was named lieutenant-governor of Manitoba and the North-West Territories. He accepted the appointment on the condition that he be appointed to the Nova Scotia Supreme Court when he completed his term.

During his brief term (1870–72), Archibald acted as de facto premier of Manitoba and laid the foundation for many of the civil institutions outlined in the Manitoba Act. The province’s electoral divisions were settled (1870), courts of law set up (1871), and an education system put in place (1871). As well, Archibald negotiated Treaties Number 1 and 2 with First Nations in what is now southern Manitoba in 1871.

During his tenure as lieutenant-governor, the country was under threat from the Fenians. Fearing a Fenian invasion of Manitoba, Archibald asked for federal troops, but was refused. Instead, he organized the defence of the new province with 100 militiamen and 70 police officers. A small Fenian force did cross into Manitoba in October 1871 but collapsed without any armed intervention. Métis fighters captured the Fenian leaders and escorted them back to the United States. Before learning of the Fenians’ undoing, Archibald met with Métis leadership in order to shore up resistance against any future Fenian raids. Archibald reportedly shook hands with Louis Riel at this meeting — though it is argued that Archibald was not aware that Riel was in attendance. This meeting created a stir in Ontario, to which Archibald replied, “It did not seem to me that it was quite the time when the country was in danger, to enquire into the antecedents or spurn the offer of any man willing to fight against the Fenians.”

In 1873, Adams George Archibald became a Nova Scotia judge. He resigned weeks later, when he was appointed lieutenant-governor of Nova Scotia, a position from which he retired in 1883.

Archibald co-founded the Nova Scotia Historical Society in 1878 and became its president in 1886. That year, he became involved in a controversy about the historical representation of the Acadian expulsion of 1755. Archibald presented two papers in which he argued that British action was justified, and that any mistreatment of the Acadians resulted from the actions of the French clergy and government. He also defended the selection of documents related to the Acadian expulsion in Selections from the Public Documents of the Province of Nova Scotia (1869). The editor, provincial record commissioner Thomas B. Akins, had been accused of suppressing documents that portrayed Acadians in a sympathetic light.

In 1888, Archibald returned to politics to win the Conservative seat in Colchester County. Ill health prevented him from running for re-election in 1891. He died 14 December 1892.