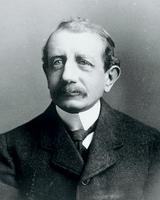 Sir Hugh John Macdonald, lawyer, politician, magistrate, premier of Man (b at Kingston, Canada W 13 Mar 1850; d at Winnipeg 29 Mar 1929), the only surviving son of Sir John A. MACDONALD. Educated at the University of Toronto, he was called to the Ontario Bar in 1872. In 1882 he moved to Winnipeg where he entered partnership with J. Stewart Tupper, eldest son of Sir Charles TUPPER. He saw active military service on 3 occasions: the 1866 Fenian invasion, the 1870 Wolseley Expedition and the 1885 North-West Rebellion. Elected for Winnipeg in the 1891 general election, he resigned in 1893.

In 1896 he joined the short-lived Tupper government as minister of the interior. After the courts overturned his election, he became leader of the Manitoba Conservatives and led them to victory in 1899. Touted as successor to Tupper, he resigned as premier to run in Brandon against Clifford SIFTON in the 1900 federal election. He retired to private life after his defeat. Macdonald's shyness and nervousness in public made the path he chose even more difficult and it was his lot to be measured against his eminent father, and inevitably he was found wanting.