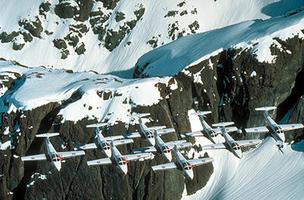 The Snowbird legacy is part of a rich air show tradition in Canada that began in the early 20th century. Canadians have been fascinated with airplanes ever since J.A.D. McCurdy coaxed the Silver Dart into the air in Baddeck, Nova Scotia, on 23 February 1909. Early heavier-than-air machines, constructed of fabric and wood, fired the imagination. Before long, American and Canadian barnstormers were thrilling audiences with their daredevil feats — low flying, loops, rolls and eventually inverted flight. Aerial circuses became highlights of Canadian summers, evolving over many decades into an impressive air show industry. As spectator events in North America, air shows are second only to national league baseball.

The first known aerial formation demonstration in Canada took place in 1919 at the Canadian National Exhibition(CNE) in Toronto. The team was led by Canada's most decorated fighter ace of the First World War, Lieutenant Colonel William G.Barker, VC, DSO, MC. He and three other veterans of the air war flew daily performances at the CNE, flying captured Fokker D.VII "war trophy" aircraft. In 1929, Canada's first official aerobatic team, the Siskins, was formed at Camp Borden, Ontario. This was only five years after the Royal Canadian Air Force was established on 1 April 1924. The Siskins flew four seasons. In 1931, they participated in the "Trans Canada Air Pageant," when thousands of Canadians across the land were able to see their air force in action, many for the first time.

The Siskins were followed by a variety of teams across Canada, as well as the RCAF's "1 Air Division" in Europe in 1953. Teams included the Blue Devils, Easy Aces, Prairie Pacific, Sky Lancers, Grey Ghosts (Royal Canadian Navy) and the Red Knight.

If the Snowbirds owe their legacy to any one team, it is the RCAF Golden Hawks. The Hawks formed in 1959 to celebrate the 35th anniversary of the RCAF and the 50th anniversary of powered flight in Canada. The team flew 317 public air displays over five seasons before being disbanded on 7 February 1964 due to government budget cuts. However, the Golden Hawks had generated much publicity and goodwill across North America, and their popularity led directly to the formation in 1967 of a new team, the "Golden Centennaires," which helped Canada celebrate 100 years of nationhood.

The Centennaires featured a team of eight Canadair CT-114 Tutor jet trainers complemented by a pair of vintage Avro 504K biplane trainers, a supersonic fighter duet comprising the Canadair CF-104 Starfighter and McDonnell CF-101 Voodoo, and the famous Red Knight (a red-painted Canadair T-33 Silver Star). By the time the centennial year ended, the team had set a single season record for the most shows, having flown 100 public demonstrations in Canada and another eight in the United States. Their 184-day Canadian tour between May and October started and ended at Expo 67, covered nearly three million kilometres and was seen by over four million Canadians. (See also Canada’s Centennial Celebrations, 1967.)

Although the Centennaires were disbanded at the end of 1967, many people believed that Canadians wanted a permanent military aerobatic team. This included the Centennaires' commanding officer, Wing Commander O.B. Philp, DFC, Base Commander of CFB Moose Jaw, Saskatchewan, Canada's largest flying training base and home to the air force's entire Tutor fleet. By 1971, he had established an unofficial seven-plane "formation" team, using the white Tutor aircraft. The pilots were all experienced instructors selected from among volunteers at two Canadian Forces Flying Training Schools.

On 11 July 1971, North America's largest one-day air show took place at Moose Jaw. Dubbed the "Saskatchewan Homecoming Airshow," its feature attraction was a team called, for the first time, the Snowbirds. (The team assumed the name following a competition among local elementary school children.) The team then performed at both the Abbotsford International Airshow and the CNE in Toronto, receiving positive reviews and initiating a new era in Canadian military aerobatics.

The Struggle for Survival

While success and fame came quickly for the Snowbirds, the team had to compete for funds within a tight military budget. It soon became obvious, though, that the team was an important and effective public relations tool for the Canadian Forces. The Snowbirds provided a professional and entertaining flying display and post-performance autograph sessions, visited schools and hospitals, and participated in a wide range of social activities with the public. As the team's reputation grew, so did the demands for such appearances.

The team continued to operate year to year on a shoestring budget until September 1977, when the Snowbirds finally achieved a measure of permanence and were designated the Canadian Forces Air Demonstration Team. Then, on 1 April 1978, the Snowbirds achieved what none of their predecessors had done, attaining full squadron status as 431 Air Demonstration Squadron. In October 1999, 431 Squadron received its Queen's Colours, denoting 25 years of active service, first as a Second World War bomber squadron, then briefly as an F-86 Sabre demonstration team in 1954, and finally as the Snowbirds.

The team is composed of about 80 personnel, including 11 pilots, technicians and support staff. Of these, 24 form the show team. All are members of the Canadian Forces who have applied to the team. Technicians are carefully chosen based on skills and experience and pilots must pass a series of rigorous flying tests. The team continues to fly the Canadair CT-114 Tutor jet trainer, although the aircraft was retired as the air force's basic jet trainer late in 1999 after 35 years.

Each season, one-third of the Snowbird team changes in order to maintain a uniform level of expertise from year to year. Pilots are invited to participate in flying tryouts each fall in Moose Jaw, and three are selected to fill vacated flying positions on the team. The normal tour of duty for each pilot is three years. The Snowbird Team Lead (Boss) is chosen separately from among pilots who have flown a previous tour with the team and have attained the rank of major. Maintenance personnel can stay with the team for a number of years. A team within a team, the ground crew keeps the squadron's travelling complement of 11 aircraft in prime condition.

The training season commences immediately after the tryouts are completed in late November and concludes in mid-April when final training is conducted in Comox, British Columbia. In total, each of the nine demonstration pilots participate in at least 120 practice sorties by the end of training. Once the show season starts, it is a non-stop routine of transit, practices and performances for six months, crisscrossing North America.

The Snowbird show has evolved over time. It is now regarded as one of the most exciting displays of its kind in the world. In 1971, the team flew seven aircraft in non-aerobatic manoeuvres only. The next year, two solo aircraft were added to the team and performed head-on aerobatics. The following year, the formation was allowed to perform aerobatic manoeuvres and in 1974, the team adopted its now-familiar red, white and blue colour scheme. The team was also the first in the world to choreograph its show to music.

The show is different every year and is limited only by the pilots' imaginations and one overriding criterion: all show manoeuvres must be safe for both the team members and the viewing audience. A Snowbirds show today involves a complex series of formation aerobatic manoeuvres and splits interspaced by the low-level precision aerobatics of the two solo pilots, all traced in smoke so the audience can follow the intricate patterns.

The level of concentration required during the show is extraordinary, with each pilot using hand, eye and foot co-ordination to maintain his relative position within a few feet of the aircraft beside him. In formation, the jets fly about 1.2 metres (4 feet) apart at speeds of between 200 and 600 km/hour. Solo aircraft are approximately 10 metres apart when they cross in head-on passes. Formation pilots experience up to 5 G during their performance. This is equivalent to a force exerted on their bodies five times their normal body weight. The two solo pilots may experience up to 7 G during their routine.

By 2020, the Snowbirds had flown over 2,700 official airshows before millions of spectators. Over the years they have performed at every major event in Canada, including the Olympic Games, the Commonwealth Games, the Grey Cup, Expo 86 and Canada Day celebrations each year in Ottawa. They have also flown at every major airshow in North America.