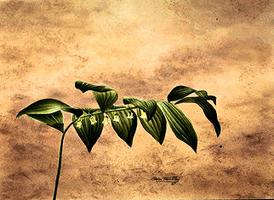 The name refers to the rhizomes, which resemble seals on legal documents (artwork by Claire Tremblay).

Solomon's seal (genus Polygonatum) is a herbaceous plant of lily family (Liliaceae). About 50 species occur in the Northern Hemisphere. Two are found in Canada, P. biflorum and P. pubescens, in moist woods and thickets from southeastern Saskatchewan to the Maritimes. Stems, up to 1 m high, have greenish white, pendant flowers and alternate leaves. Berries are blue to blue-black. Both native species were a source of food, cosmetics and medicines (eg, for bruises, headaches) for Indian peoples. Both native and introduced species are good garden plants (easily propagated by division). Introduced species have flowers and habit of growth similar to native species, except for P. hookeri, a good alpine garden plant, 2 cm high, with small, lilac flowers in leaf axils. Common name refers to marks on the rhizomes (underground stems) which resemble seals used on legal documents. Smilacina, false Solomon's seal, also a member of lily family, may be confused with Polygonatum.