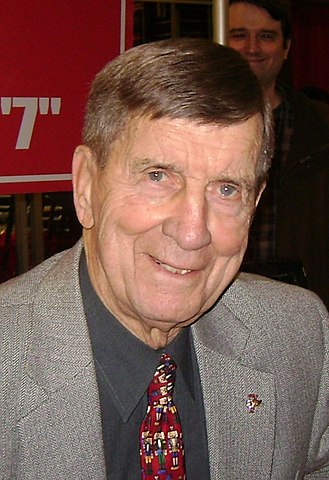 Lindsay came from a hockey family: his father, Bert Lindsay, played with teams such as the Renfrew Millionaires as goaltender. Ted Lindsay's talent was recognized during the 1943–44 season by renowned coach Charlie Conacher, and he was chosen to be part of the Oshawa Generals, who went on to win the Memorial Cup that season.

Lindsay joined the Detroit Red Wings in 1944 and played left wing on the famous “Production Line,” with Sid Abel at centre and Gordie Howe on right wing. He won the NHL scoring title in 1949–50, but he was best known for his toughness and checking. Lindsay’s fearless style helped the Red Wings to three Stanley Cup victories during the 1950s (1952, 1954 and 1955). He was traded to Chicago when Detroit manager Jack Adams discovered his role in forming the controversial NHL players’ union, and although at the time the move was thought to be a step down Lindsay assisted the failing team in mounting a respectable comeback.

Lindsay retired in 1960, having played a total of 999 NHL games. He continued to play hockey as a recreational sport, meanwhile pursuing business interests in the automotive industry. In 1964, the Red Wings approached Lindsay with the offer, which Lindsay accepted, of making a comeback. The team did well that season, finishing first in the league for the first time since Lindsay’s departure in four years earlier. He officially retired that season, and was inducted into the Hockey Hall of Fame in 1966, though he refused to attend the banquet because it was open to men only. (The Hall banquet was open to both sexes the following year.)

Ted Lindsay’s 379 goals and 472 assists were records for a left winger when he retired. He returned to Detroit for a tumultuous stint as general manager in 1977, making 41 roster moves in his first season alone. His tenacity had winning results, however: Lindsay was voted the NHL’s executive of the year that year, and the Red Wings enjoyed continued success during Lindsay's tenure. In 2008, the Red Wings commissioned a statue in Lindsay's honour, which is currently housed in Detroit’s Joe Louis Arena along with his retired No. 7 jersey.