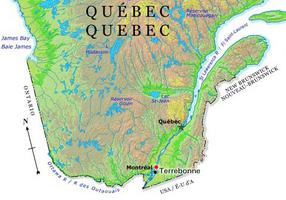 Terrebonne, Qué, City, pop 80 531 (based on the 2001c), 42 214 (1996c), 39 700 (1991c), area 154.41 km2, inc 2001, was created by the amalgamation of the former municipalities of LACHENAIE, LA PLAINE and Terrebonne. Terrebonne dates back to 1853 and was first incorporated as a city in 1860 and then again in 1985, following the merger with the parish municipality of Saint-Louis-de-Terrebonne, created in 1855. The city is located about 12 km northeast of MONTRÉAL on the north shore of the Rivière des Mille Îles, opposite LAVAL. The name Terrebonne, meaning "good soil," dates back to the original seigneury of Terrebonne granted to Andreé Daulier des Landes (1653-1715) in 1673. The parish name of Saint-Louis recalls Louis Lepage de Sainte-Claire (1690-1762), the priest-seigneur who built the first manor house (1735) as well as the first sawmill and gristmill in Terrebonne.

Vieux Terrebonne is a veritable heritage storehouse. The historic buildings and landmarks of the old village centre recall the role played by the NORTH WEST COMPANY in the history of Terrebonne. The restored 19th-century complex of Île des Moulins (Mill Island), built in the rushing waters of the Rivière des Mille Îles, right off the old waterfront, includes a bakehouse (1803), gristmill (1846), seigneurial office (1850), carding mill (1850) and sawmill (1804), reminders of that early Canadian pre-industrial era. The fact that Terrebonne was incorporated as a city as early as 1860 is testimony to the importance it had in the second half of the 19th century. Between 1986 and 1996, Terrebonne witnessed strong economic growth and has become a centre of manufacturing. Major employers within the city include the metal works, plastics and furniture industries.