Tobias Enverga Jr., senator, civic leader (born 2 December 1955 in Quezon province, Philippines; died 16 November 2017 in Medellín, Colombia). He was the first Canadian of Filipino origin appointed to the Senate. He was also the first Filipino Canadian elected to public office in Toronto, having served as a TCDSB trustee in Ward 8 in 2010.

Tobias Enverga Jr., senator, civic leader (born 2 December 1955 in Quezon province, Philippines; died 16 November 2017 in Medellín, Colombia). He was the first Canadian of Filipino origin appointed to the Senate. He was also the first Filipino Canadian elected to public office in Toronto, having served as a TCDSB trustee in Ward 8 in 2010. 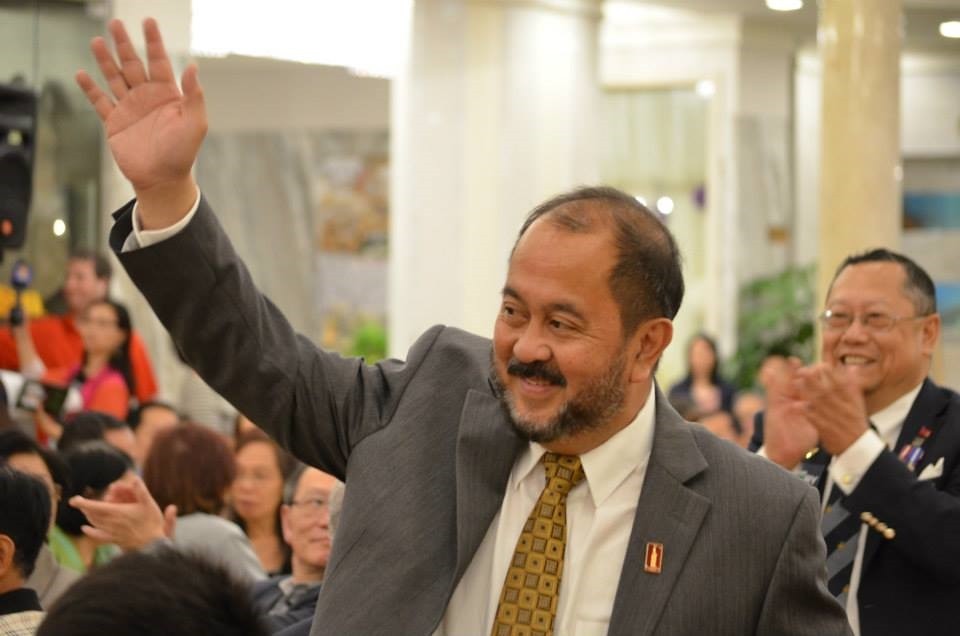 Tobias Enverga Jr. was born in the town of Lucena, in the Philippines. He was the sixth child of a middle-class family of educators in Quezon province. His father, Dr. Tobias Y. Enverga Sr., was a college dean whose wife, Marcela Combalicer, came from the town of Infanta.

Called Jun by relatives and friends, Tobias went to study at the Luzonian Colleges (now Enverga University), where his father was the former dean. He continued his post-secondary education at the Colegio de San Juan de Letran in Manila. At that time, the Philippines was under martial law. The young Enverga became an activist and a member of the socialist youth group Kabataang Makabayan (Patriotic Youth). He earned his Bachelor of Arts in Economics from Letran in 1976.

After graduation, he worked for the Bank of the Philippine Islands. There, he met Rosemer Albovias, who would later become his wife.

Tobias Enverga moved to Canada in February 1981. (See Immigration to Canada.) He briefly worked for a multinational bank (see Banking in Canada). After two years, he returned to the Philippines. Tobias and Rosemer married in January 1983. By April, they moved to Toronto and had three children. He became a Canadian citizen in 1985.

He eventually ended up working at the Bank of Montreal (BMO). There, he started as a cheque encoder in the mailroom. He was then promoted to a senior position. While working in the bank, he attended classes at Centennial College. He earned a Computer Studies Certificate and became a computer operator at the bank.

He also pursued a Project Management course at York University’s Schulich School of Business. Later, he became a manager for BMO’s IT department. His tenure there lasted for over three decades.

Community service and charity defined Tobias Enverga’s life and career. He rose to prominence after assuming leading roles in community groups and several charitable projects. He helped raise funds for the 1998 Philippine Centennial Celebrations. The event drew thousands of attendees to Toronto. He was also the founder and president of the Lucena City Association of Ontario. The group notably sent medical equipment and humanitarian missions to the Philippines.

From 2005 until 2009, he was the president of the Philippine Independence Day Council (PIDC). The group organizes various activities in Toronto promoting Philippine history, freedom and culture. Public events mark Philippine Independence Day on 12 June every year. Filipino Canadian communities observe the holiday through festivals, parades and flag-raising ceremonies. He also became the director of the Canadian Multicultural Council-Asians in Ontario. Moreover, he co-chaired the Asian Heritage Month Celebration for the Greater Toronto Area.

From 2009 to 2011, Enverga acted as a board member of the Community Alliance for Social Justice (CASJ). The CASJ was a broad alliance of individuals and groups that emerged from the grassroots campaign calling for justice for Jeffrey Reodica, a Filipino teenager shot to death by Toronto police officer Dan Belanger in 2004.

Tobias Enverga became the first Filipino Canadian to hold a publicly elected position in Toronto. In October 2010, he ran to become Ward 8’s school trustee in Scarborough on the Toronto Catholic District School Board (TCDSB). (See Catholicism in Canada.) In a tight contest, he won the election over former school principal Carol Williams.

Within the school board, he advocated for the care of children with disabilities. He also became a member of the Special Education Advisory Committee at the TCDSB and the Down Syndrome Association of Toronto. (See also Ableism.) He served as a Catholic school trustee for almost two years before his appointment to Parliament.

First Filipino in the Senate

Tobias Enverga Jr. was the first Filipino Canadian to sit in the Senate. On 6 September 2012, former prime minister Stephen Harper appointed Enverga to the upper house of Parliament. He was officially sworn in as a senator three weeks later.

Senator Enverga advocated for multiculturalism. He became co-chair of the Canada-Philippines Parliamentary Friendship Group in his first year as a senator. In 2015, he brought forward a bill in the Senate to proclaim a month dedicated to Hispanic heritage. Parliament passed his bill into law in 2018. It designated October each year as Latin American Heritage Month. (See Latin American Canadians.)

Enverga acted as a member of the Canadian delegation to the ParlAmericas. The network is composed of representatives from 35 countries in North, Central and South America and the Caribbean. He played an active role in building ties with parliamentarians and civil society representatives from various regions through political dialogue and cooperation.

In 2008, Tobias Enverga received the Lingkod sa Kapwa Pilipino (Service to Fellow Filipinos) presidential award from former Philippine president Gloria Macapagal Arroyo. The award is given to Filipino groups or individuals “for their exceptional or significant contribution to reconstruction, progress and development in the Philippines.”

In 2013, he was elected to the rank of Knight Grand Officer of Rizal. The Order was created to honour and uphold the ideals of Philippine national hero José Rizal.

After his death, Senator Tobias Enverga Jr. was awarded the 2018 Golden Balangay Lifetime Achievement Award. The award was granted in recognition of his years of community service in Canada. That year, he also received the Quezon Medalya ng Karangalan (Medal of Honour) for his contributions in public service. It is the highest recognition to residents of Quezon province.

He was also a recipient of the 2021 Quincentennial Award given by the Philippine Consulate General in Toronto. The awarding of the plaque marked the Philippines’ celebration of the 500th year of various events in the archipelago, notably the first circumnavigation of the world.

His service in Parliament was cut short in 2017. On 16 November, he died in an accident while on a parliamentary trip to Medellín, Colombia, to attend the ParlAmericas annual Plenary Assembly. He was buried in Christ the King Catholic Cemetery in Markham.

His legacy was reinforced with the Senator Tobias C. Enverga Medal of Excellence. It was established in 2017 a few months before his death to recognize “outstanding leaders and/or groups who have made significant contributions towards the betterment of their communities.”