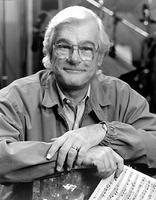 The Honourable Thomas Benjamin Banks, OC, AOE, pianist, conductor, arranger, composer, TV personality, actor, producer, politician (born 17 December 1936 in Calgary, AB; died 25 January 2018 in Edmonton, AB). The multi-talented Tommy Banks has had an unparalleled, multi-faceted career spanning more than 60 years in virtually every aspect of the entertainment industry in Canada. A professional jazz pianist at age 14, he went on to lead his own bands, conduct symphony orchestras around the world, direct musical ceremonies at international events, host his own long-running television show, and act in film and television. He also served nearly 12 years in the Senate as a member of the Liberal Parliamentary Caucus.