In 2004, Tommy Douglas was voted “the greatest Canadian of all time” as part of a CBC television series. The fact that he beat out famous Canadians such as Terry Fox, Pierre Trudeau, Wayne Gretzky and Frederick Banting demonstrates the importance of public healthcare to Canadians. Yet, despite his undeniable contribution to Canada, Douglas was not perfect. Most disturbing to the modern reader was his support for eugenics, a set of beliefs and practices aimed at improving the human population through controlled breeding. Like many Canadians in the 1920s and 1930s, including Emily Murphy and William Aberhart, Douglas believed that eugenics could help improve Canadian society.

Douglas’s interest in eugenics seems to have been motivated by a desire to lessen the misery and suffering he saw around him. The same concern led to his decision to become a minister and to his eventual career in politics. Following his ordination as a minister in 1930, Douglas and his wife moved from Manitoba to Saskatchewan, which had been hit hard by drought and economic depression. Dismayed by the plight of the poor and unemployed, he became convinced that the government had to act. By 1932, he had helped establish a local association of the Independent Labour Party. In July 1933, he attended the national convention of what would become the Co-operative Commonwealth Federation (CCF). Two years later, he was elected to the House of Commons as the CCF candidate for Weyburn, Saskatchewan. It was the start of a long and significant political career — one that changed the political and medical landscape in Canada.

Master’s Thesis on the “Subnormal” Family

Around the same time, Tommy Douglas became convinced that eugenic policies could help lessen suffering and improve society. This was one of the underlying arguments in his master’s thesis, “The Problems of the Subnormal Family,” which he finished in 1933. (Douglas received a Master of Arts in sociology from McMaster University.) The thesis documented the lives of 12 women and their families.

According to Douglas, a “subnormal” family had a “low mental rating…anywhere from high-grade moron to mentally defective,” and below normal “moral standards” (including those who were sexually promiscuous or involved in prostitution). According to Douglas, these families were a heavy social and economic burden on Canadian society.

His main concerns were to control the reproduction of “subnormal” individuals and lessen their impact on the rest of society. He recommended several policies that required more intervention by the government, education system and church in society. This included a mandatory medical certificate for couples who wanted to marry. Doctors would have to certify the applicants’ mental and physical fitness, reducing the chances that mentally “subnormal” or diseased individuals would marry. He also suggested that all couples give seven days’ notice of their intention to marry.

In his master’s thesis, Tommy Douglas also recommended segregating “subnormal” individuals and families. This included social segregation and educational segregation. According to Douglas, subnormal families should be located “in a community by themselves, where the [negative] physical, mental and moral effects listed above would no longer affect the community.”

Another advantage of such segregation would be that they would become less of a public burden. Most of the men listed above are good workers, but poor managers…. They possess the industry, but lack the initiative to succeed, where decisions of any importance have to be made. Were these families placed on a state farm, or in a colony where decisions could be made for them by a competent supervisor, and where their buying could be done for them, there is no reason why they could not become self-supporting….


Douglas also believed that “subnormal” children should be placed in segregated classes, with teachers who were trained to manage “problem” children. On the one hand, this would prevent such children from “hold[ing] brighter children back by keeping them in an enervating [draining] atmosphere.” On the other hand, the class could work at a suitable pace, allowing them to better absorb class material. Douglas also suggested that schools include “mechanical” skills rather than academic subjects in the curriculum for these children.

In his master’s thesis, Tommy Douglas also discussed segregation of the sexes and whether this would help prevent reproduction of the physically and mentally unfit. However, he felt that this would be “difficult to enforce, and would be an unnatural mode of life.” Instead, he recommended sterilization — that is, performing a permanent medical procedure, such as tubal ligation, to prevent pregnancy.

Sterilization of the mentally and physically defective has long been advocated, but only recently has it seeped into the public consciousness. From the day when Plato wrote his Republic to the present, eugenists [sic] have advanced various solutions to the problem of the defective, but sterilization seems to meet the requirements of the situation most aptly. For while it gives protection to society, yet it deprives the defective of nothing except the privilege of bringing into the world children who would only be a care to themselves and a charge to society…. Only those mentally defective and those incurably diseased should be sterilized. Many subnormal families whose intelligence is not of a high order are capable of raising useful citizens. But society should have some voice in the charges and responsibilities it will assume, not only now, but in the generations to come.

Tommy Douglas’s interest in and support for eugenic policies is both striking and disturbing to the modern reader. At the time, though, his ideas were not unique. Many Canadians supported eugenic policies around this time, including Emily Murphy, Nellie McClung, Carrie Derick and William Aberhart. Both Alberta (1928) and British Columbia (1933) passed legislation that legalized the sexual sterilization of mental hospital inmates. In America, 32 states passed eugenic legislation.

However, by the time Douglas became premier of Saskatchewan in 1944, he had become disillusioned with eugenic policies. Many left-wing intellectuals abandoned eugenics after the implementation of massive eugenic programs in Nazi Germany. As premier, Douglas rejected two reviews of the mental health system that recommended eugenic policies, including sterilization. Instead, he supported a different approach, including therapy for people with mental illnesses and vocational training for those with intellectual disabilities. 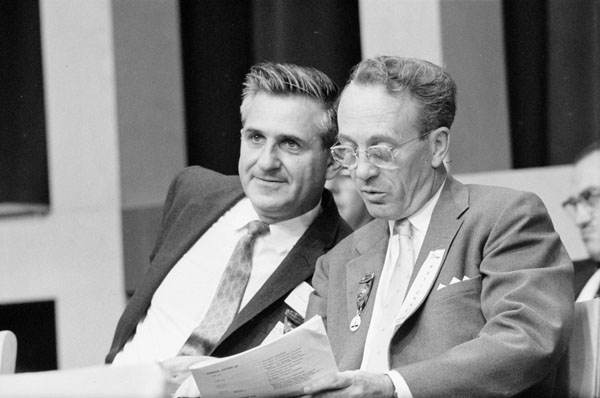 David Lewis and Tommy Douglas at the founding convention of the New Democratic Party (1961).