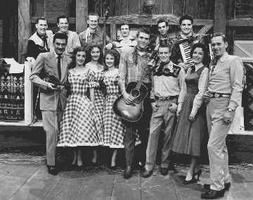 Country Hoedown with King Ganam And His Sons of the West, The Hames Sisters, Tommy Hunter, Tommy Common, Lorraine Foreman and Gordie Tapp (left to right). The show ran from 1956 to 1965, when it was succeeded by the The Tommy Hunter Show. 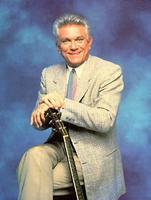 Airing for 27 seasons, the Tommy Hunter Show was one of the longest-running network variety shows, and provided national exposure for Canadian country singers (CBC).
PreviousNext

The son of a railroad worker, Tommy Hunter grew up in London, ON, listening to Grand Ole Opry radio broadcasts and idolizing country music performers Roy Acuff, Eddy Arnold and Hank Snow. After seeing Roy Acuff and his Smoky Mountain Boys perform in London in 1946, Hunter started taking weekly lessons on a rented guitar, and by age 10 was performing in churches, veterans hospitals and in between movie screenings at local theatres. After dropping out of high school at 16, he joined the London Little Theatre production of Dark of the Moon and performed at the Dominion Drama Festival in Victoria, BC. He also appeared regularly on the CHML Hamilton radio program Main Street Jamboree (1954–55) and sang with the Golden Prairie Cowboys from Wingham, Ontario.

In 1956, Hunter joined CBC TV's Country Hoedown as rhythm guitarist with King Ganam's Sons of the West. He remained on the show while also hosting his own CBC Radio program, The Tommy Hunter Show (1960–65), which made the leap to television and succeeded Country Hoedown as a weekly program in 1965. Essentially a Canadian version of the Grand Ole Opry, it was extended from a half-hour to an hour in 1970.

In a 1966 interview with the Toronto Daily Star’s Ralph Thomas (who described Hunter's voice as “soft and simple, his smooth baritone unmarred by country twang”), Hunter explained that he wanted the show to have “a middle-of-the-road approach... something that's just as much pop music as it is country and western.” He consciously eschewed the typical “barn and a bale of hay” image, favouring a slicker style that was more in keeping with the pop-variety shows of the day. A disciple of the more pop-oriented Nashville sound who stayed true to his humble, sincere, straight-ahead persona, the twinkly-eyed Hunter ended every episode with the phrase, “And be the good Lord willing, we’ll be talking to you real soon.”

At its peak in the early 1970s, The Tommy Hunter Show drew three million weekly viewers in Canada. It featured virtually every major country performer in the business, from Hunter’s heroes Hank Snow, Wilf Carter, Roy Acuff and Eddy Arnold to Roy Rogers, Johnny Cash, June Carter Cash, Alan Jackson, Vince Gill, the Judds and Garth Brooks. It also featured such Canadian artists as Maurice Bolyer, Al Cherny, the Rhythm Pals and Anne Murray, and opened the door for many new acts including fiddler April Verch and singer Shania Twain, who first appeared on the show in 1979 at age 14.

The Tommy Hunter Show was introduced to US viewers by The Nashville Network in 1983 and was a staple on the network for 10 years. In Canada it garnered a Gemini Award in 1992 for Best Variety Series. In May 1992, when the show was cancelled by the CBC after 27 years, it was still one of the most popular variety programs on Canadian television, with over 800,000 weekly viewers. Hunter was reportedly deeply saddened by the show’s cancellation, but returned in 2003 for the CBC TV music special Talk About the Good Times.

Hunter made his first recordings in 1958 as part of King Ganam’s band, and subsequently completed solo LPs for Columbia and its Harmony label in the late 1960s and early 1970s, including Tommy Hunter (1964), Travelling with Tommy Hunter (1968), Time Slips Away (1971) and Greatest Hits (1973). With RCA he released Tommy Hunter (1975) and The Anniversary Sessions (1989). He also released several albums of gospel readings and music and published a book of his photography. Through his own label, Edith Records, Hunter released a half-dozen albums, including Timeless Country Treasures (1995), Songs of Inspiration (1995) and Traditional Country Christmas (1997).

Hunter used the song “Travellin’ Man” as his TV theme song and lived up to that title, performing widely across Canada throughout his career. In the 1960s, he was the leader of several concert parties that toured Europe for the Department of National Defence. During summers 1963–70 he appeared at the Academy Theatre in Lindsay, Ontario, in a concert series broadcast by CBC Radio as “Country Holiday.”

After the cancellation of his television show, he took up touring again, typically performing about 70 concerts annually with his backup band, The Travellin’ Men. In 1997, his 50th anniversary as an entertainer, Hunter performed at the CNE and the Grand Ole Opry. In early 2012, Hunter announced that he would be retiring from live performance after a final tour of Canada, which culminated with a concert in his native London on his 75th birthday.

In 1974, Hunter received a citation from the Country Music Hall of Fame in Nashville, TN, for his “continuous and outstanding contribution to country music.” In 1990, he became the fifth Canadian to be inducted into the Hall's Walkway of Stars. The city of London, Ontario, proclaimed the week of his 60th birthday, 19–26 March 1997, Tommy Hunter Week, and later that year named a street Tommy Hunter Way in his honour.