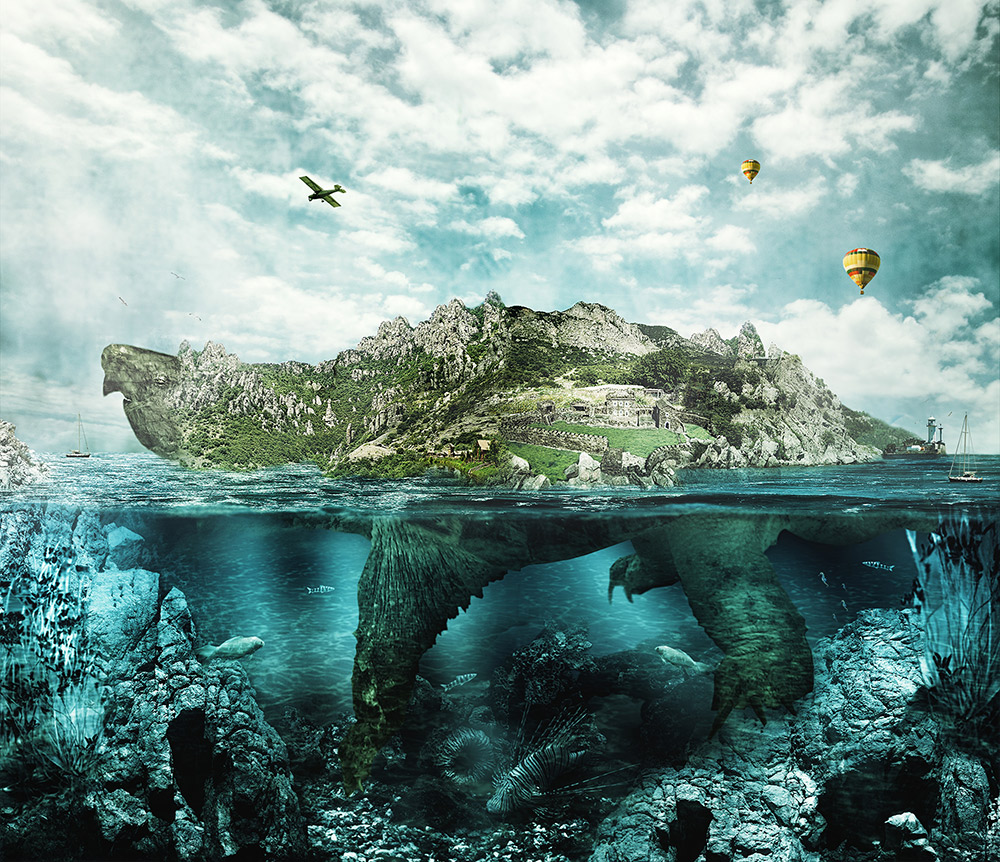 Turtle Island is the name many Algonquian- and Iroquoian-speaking peoples mainly in the northeastern part of North America use to refer to the continent. In various Indigenous origin stories, the turtle is said to support the world, and is an icon of life itself. Turtle Island therefore speaks to various spiritual beliefs about creation and for some, the turtle is a marker of identity, culture, autonomy and a deeply-held respect for the environment.

The story of Turtle Island varies among Indigenous communities, but by most accounts, it acts as a creation story that places emphasis on the turtle as a symbol of life and earth. The following versions are brief reinterpretations of stories shared by Indigenous peoples. In no way do these examples represent all variations of the tale; they merely seek to demonstrate general characteristics and plots of different stories.

In some Ojibwe oral traditions, the story of Turtle Island begins with a flooded Earth. The Creator had cleansed the world of feuding peoples in order to begin life anew. Some animals survived the flood, such as the loon, the muskrat and the turtle. Nanabush (Nanabozo) (or Weesakayjack in some Cree tales) — a supernatural being who has the power to create life in others — was also present. Nanabush asked the animals to swim deep beneath the water and collect soil that would be used to recreate the world. One by one the animals tried, but one by one they failed. The last animal that tried — the muskrat — was underwater for a long time, and when it resurfaced, the little animal had wet soil in its paws. The journey took the muskrat’s life, but the creature did not die in vain. Nanabush took the soil and put it on a willing turtle’s back. This became known as Turtle Island, the centre of creation.

Many Haudenosaunee versions of the tale start in the Sky World — a land in the heavens where supernatural beings existed. One day, a pregnant Sky Woman fell through a hole under the roots of a tree and descended to Earth. Gently guided down by birds that saw her falling through the sky, she was placed safely onto a turtle’s back. Sky Woman was grateful to the animals for helping her. In some versions, her appreciation was so powerful that the earth began to grow around her, forming Turtle Island. In other versions, the animals brought forth mud from the bottom of the water, which grew on top of turtle’s back and formed a new land for Sky Woman and her descendants — Turtle Island.

Scholars tend to describe tales like Turtle Island as “earth-diver myths” — stories that in some way connect the origin of the world to beings (often animals) that dove into ancient waters to retrieve soil used to create (or recreate) the world as we know it. Such tales also often involve the presence of supernatural beings, such as transformers or tricksters, and a Creator. (See also Religion and Spirituality of Indigenous Peoples in Canada.)

Did you know?
Not all Indigenous creation stories feature a turtle. In many Northwest Coast Indigenous cultures, Raven features prominently in origin tales. According to the Haida, for example, Raven created Haida Gwaii and brought light into the world. Sedna, the ocean spirit, whose fingers created all the sea creatures, is central to Inuit creation stories. For some Innu peoples, it is Kuekuatsheu (Wolverine) that made land out of rocks and mud. Creation stories may not always feature animals and are not always about the origins of the land. Sometimes, these tales speak about how all lifeforms came to be, or about how humans learned valuable life lessons.

Reclamation is not an easy process. Besides the involvement of various levels of government on the official renaming of any location, Indigenous peoples are not always in agreement about place names. For example, the Stoney-Nakoda have proposed renaming Calgary to Wichispa Oyade, but the Siksika, who also have claims to the area, instead prefer their own term: Mohkinstsis-aka-piyosis.

Despite such debates, reclamation efforts continue. In the case of Turtle Island, the term and origin story have found their way into various sectors of Canadian society. For example, some Indigenous and non-Indigenous organizations have adopted the term as part of their official name or the name of their programming, such as Turtle Island News and the Toronto Zoo’s Turtle Island Conservation programme. (See also Zoos.)

The story of Turtle Island has also found its way into school curricula and texts. Turtle Island Reads — a Montreal initiative sponsored by McGill University and the local CBC — provides Canadians with stories about Indigenous peoples by Indigenous peoples. In 2018, the Royal Canadian Geographical Society, in partnership with various First Nations, Métis and Inuit organizations, released the Indigenous Peoples Atlas of Canada. The atlas re-envisions the map of Canada, using traditional place names, territorial boundaries and stories (such as that of Turtle Island) to direct their design. (See also Indigenous Territory.)