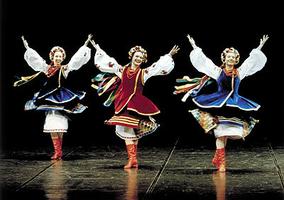 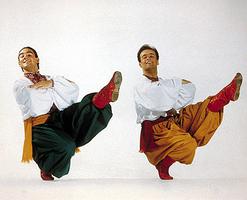 The Ukrainian Shumka Dancers of Edmonton are perhaps the most well known of Canada's 230 Ukrainian dance groups and schools. Operated as a nonprofit society, the objectives of the group are to promote the preservation, development and advancement of Ukrainian culture and dance as a part of Canadian heritage.

Chester Kuc served as Artistic Director from the group's founding in 1959 until 1969, followed by Orest Semchuk (1969-82) and John Pichlyk (1982-97). Over 300 individuals have danced as members of Shumka since its inception.

Ukrainian dance groups in Canada have three focuses of activity. The first is on dance performed for recreational purposes. Dances have been performed within Ukrainian communities since the beginning of the first wave of Ukrainian immigration to Canada in 1891. This type of dancing continues today, but functions in the background, eclipsed by the more visible Ukrainian national dance, most prominent from 1927 to 1960. In contrast to recreational dance, Ukrainian dance with a national focus is performed on stage and serves explicitly as a symbol of Ukrainian identity and ethnicity. Performers are specially trained and dance in costume to promote ethnic pride within the Ukrainian community, but also to raise awareness and appreciation of Ukraine in the general North American public. The national focus has an important place in Ukrainian dance in Canada, partially because of the plight of Ukraine behind the iron curtain for most of the 20th century.

Although the Ukrainian Shumka Dancers are concerned with dance as a recreational activity and an expression of national sentiments, the group clearly demonstrates the shift towards a third focus -a concentration on Ukrainian dance as a stage spectacle and performing art. Much of the explicit concentration of the choreographers, performers, and supporting workers is connected to aesthetics and the presentation of a moving theatrical experience for audiences.

One of the key characteristics of the Ukrainian Shumka Dancers is the fusion of Canadian and Ukrainian elements in their work. Elements of Ukrainian culture include many of the steps, melodies and costume pieces - symbols of Ukrainian peasant culture and history that are connected with the heritage of many group members. The monumental and spectacular East European tradition of ballet-based folk-staged dance is also influential, particularly in recent decades.

Specifically Canadian elements which characterise Shumka's work include the group's long-time commitment to the story line as an organizing device in their productions, the selection of themes that are seen as attractive to Canadian audiences, the body language in mime sequences, as well as a tendency to extremely fast tempo and dense choreographic texture. Costumes, lighting, set design, rehearsal schedules, production standards, promotion, and management are also clearly Canadian.

Shumka's prominence is related to a consistently high technical and artistic level of performance, challenging and innovative choreography, as well as extensive exposure. New programs are created, choreographed, polished and toured on average each three years. Dancers average 12 years of Ukrainian dance training prior to joining the company. The Ukrainian Shumka Dancers have a large children's dance school and an active alumni organization. Whereas performing members are unpaid, alumni have gone on to careers in dance, costume design, production, arts promotion, music, folklore, and other fields based on skills they have developed for Ukrainian dance.

Shumka's success can also be attributed to consistent and solid administration and tour production. Since 1969, the group has performed in Tunisia, Japan, Korea, Hong Kong, the United States, Ukraine and Russia. Nine Canadian tours have been mounted since 1977, building to the point where the 1995-96 tour of the Absolutely Shumka program was seen by some 50 000 people and their most recent production, Shumka's Cinderella (2000) toured 20 cities across Canada. In December 1997 Shumka began a tradition of touring internationally with the National Opera and Ballet of Ukraine in Sulyma Production's Nutcracker: A Ballet Fantasy. Shumka holds the fifth highest box office figures for a nationally touring dance production in Canada.