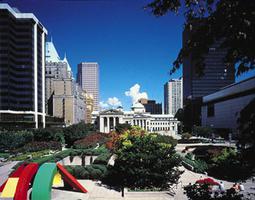 The Vancouver Art Gallery, founded in 1931, has a collection of about 10 000 paintings, sculptures, photographs, prints, drawings and objects, largely of contemporary Canadian art. One of the collection's strongest elements is the Emily CARR bequest, and a gallery is devoted to an ongoing display of her work. The original gallery was a small art deco building on West Georgia Street. It housed a modest collection of British works purchased for the Vancouver Art Gallery by Sir Charles Holmes, and featured an exhibition schedule devoted largely to British art trends. In 1938 the gallery was occupied by unemployed men protesting government policy, but no paintings were damaged.

After the war, Vancouver's modernists, Lawren HARRIS among them, set the gallery on a new course. A renovation and expansion in 1950 gave the building the look of the international style, and in the 1960s the gallery became well known for its open and innovative programs under Doris Shadbolt and Tony Emery. In 1983 the gallery moved into larger quarters in the old courthouse which had been renovated by Arthur ERICKSON.

The acquisitions budget of the Vancouver Art Gallery is currently one of the largest in Canada, and besides having an active exhibition program, the gallery also maintains a library, a slide library and education programs. Between 1972 and 1984, the gallery published Vanguard, a periodical of Canadian art criticism. The gallery also played a role in the early 1970s in establishing the Pacific Cinémathèque and Video Inn.

In 2008, Premier Gordon Campbell announced that the Province of British Columbia would provide $50 million towards the construction of a new building that would essentially double the size of the current facility. The board is currently in the process of selecting an architectural firm and location for the building.