The Québec City Armoury, in Place Georges V, dates back to 1884 when architect Eugène-Étienne Taché drew up the building plans alternately with those for the Québec National Assembly and the old Palais de justice. Construction went on from1884 until 1887, the year it was inaugurated by Canada's Governor General, Lord Stanley.

While the architecture and materials of Montreal's new buildings lean toward the future, those of Québec City rather contemplate the past. Through the use of turrets, dormer windows, and old stone, the architect sought to give the armoury a French chateau style and thus recreate the Vieille-France ambiance of Québec of yesteryear. As military and civilians lived in close daily contact in Québec City and got along well for nearly two hundred years, the armoury also served as a public meeting place. Provincial and horticultural exhibitions and even a Salon du livre (Book Fair) were held within its walls. Every July14, France's national holiday was celebrated there, and popular balls took place.

The building had to be expanded in 1913. The drill hall alone with its distinctive characteristic of no columns covered an area of 2226 square metres, and the carved wooden ceiling encircled by a gallery was admired by all of its occupants up until the present. The stone exterior had fortified windows on the ground floor, while the windows on the other floors were embedded in the roof built from copper sheets.

Voltigeur Armoury
In 1998, the armoury was renamed in honour of the VOLTIGEURS de Québec, an infantry unit formed in 1862 - the oldest French Canadian rifle regiment still in existence. Today Les Voltigeurs are a military reserve unit whose mission is to support the regular forces, and the armoury serves as the official residence of operations for its 345 soldiers. It also housed a museum with military decorations, flags, and various documents and artefacts from the Regiment offering a true account of Canada's military history since 1885. In 1987 the National Historic Sites Commission granted it status as a national architectural historic site, the only military armoury so recognized in Canada. 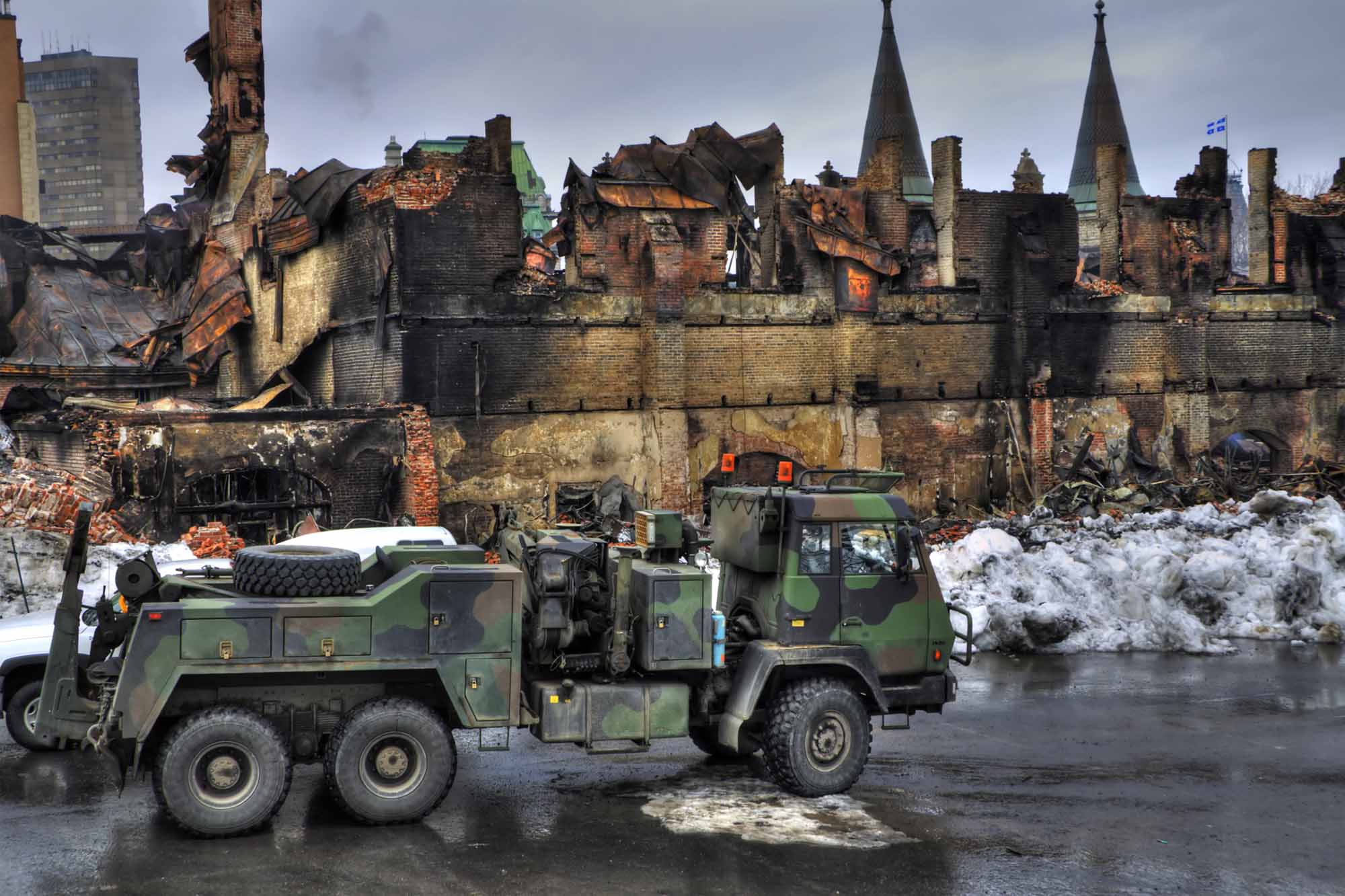 On March 4th 2008, a fire gutted the Quebec City Armoury. This is a pseudo-HDR image created from a single RAW file. 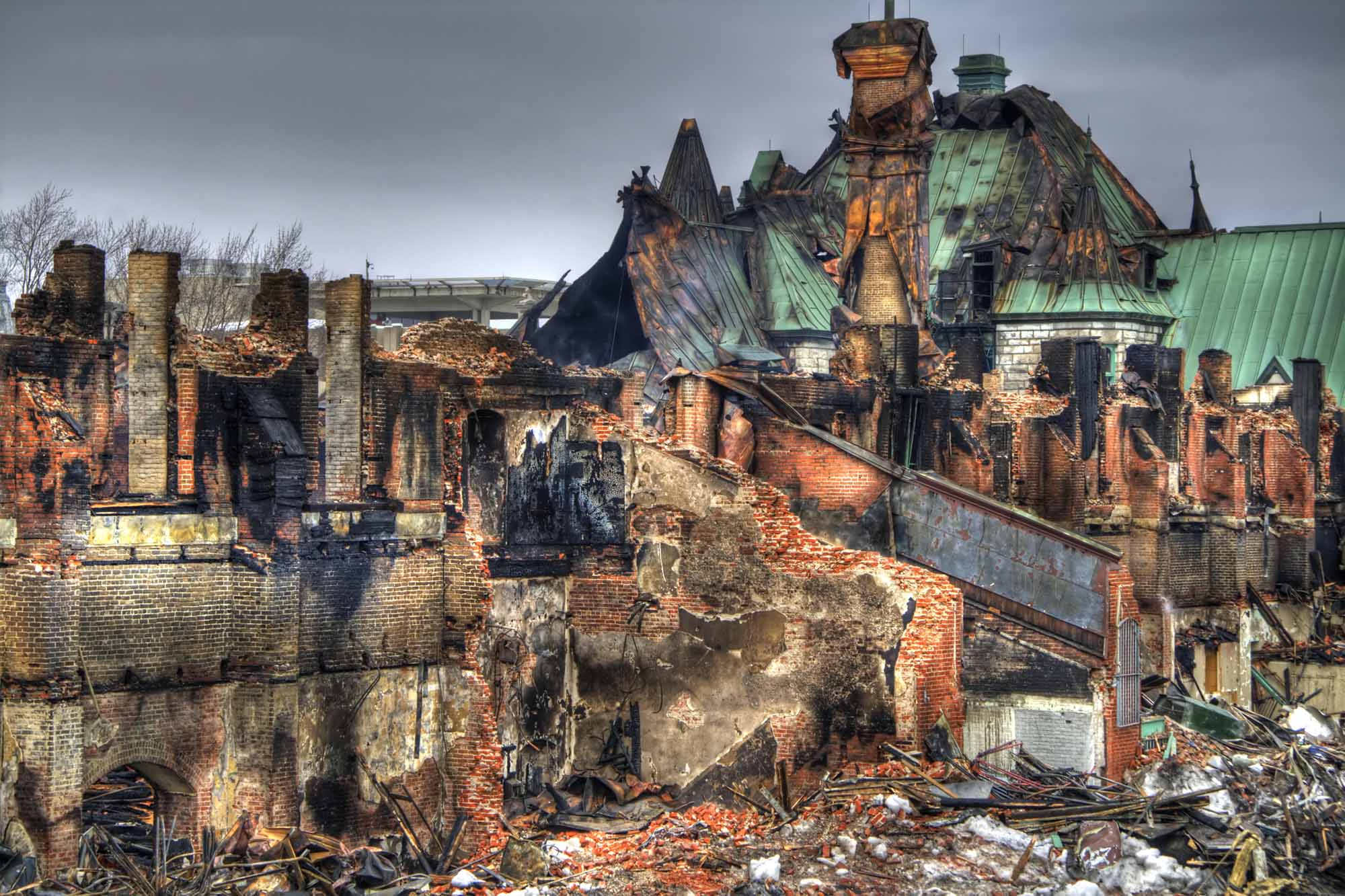 On March 4th 2008, a fire gutted the Quebec City Armoury. This is a pseudo-HDR image created from a single RAW file.
PreviousNext

Faithful to tradition, the Voltigeur Armoury also played an active part in Québec City's civilian life. Apart from tourism, the building every year held a festival of military music, exhibits, dances and concerts. For the 100th anniversary of the Stanley Cup, recalling the inauguration by Lord Stanley, an NHL parade on the Plains of Abraham started out behind the building. In 1987, it accommodated the Hockey Hall of Fame. Several events were scheduled to take place for the celebrations commemorating the 400th anniversary of the founding of Québec City. However, during the night of April 4, 2008, to everyone's great shock and devastation, a fire ravaged the armoury. Except for part of the facade the entire building was totally destroyed, but thanks to the exemplary work of the firefighters the greater part of the artefacts, flags and other museum documents were saved and will be restored. The 345 soldiers were relocated, and negotiations are under way to launch a reconstruction, regardless of the financial considerations - especially since all Taché's original plans are still available.