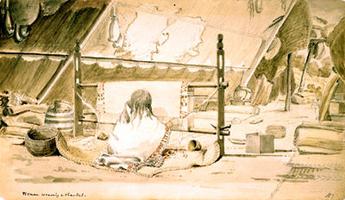 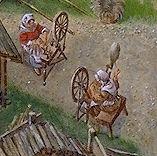 Long before loom weaving was developed, woven and coiled baskets were made from grasses, twigs, root fibres and leaves readily collected from indigenous plants and worked with the hands. Basketry forms have changed little to the present day. Spinning was first used in the production of simple ropes, cords and fishing lines and, later, to create yarns. More complex forms of weaving gradually evolved from basketry and a new tool, the loom, was developed. The loom allowed the interlacing of fibres to make a continuous web (or fabric) composed of 2 sets of threads at right angles to one another: warp threads, stretched under tension down the length, and weft threads, interlaced across the width. In primitive looms the tension on the warp is created by weighting the threads with stones, just as primitive spinning uses a drop spindle under the force of gravity. As the requirements of the loom (stronger threads) brought about changes in yarns (simple and compound) and vice versa, these simple devices developed into modern textile technology. Tapestry weaving coincided with the invention of loom weaving, but tapestry is worked on a loom of different type. In tapestry the weft threads cover the warp in a discontinuous fashion. Early tapestries often told a story in pictures; modern ones rarely do so. Early settlers in Canada brought advanced weaving skills with them and their home industry satisfied the community's textile needs. Industrialization caused a decline in home spinning and weaving, but interest has renewed in recent years. There are an estimated 7,000 or 8,000 weavers in Ontario, Québec and British Columbia, and weavers' guilds exist in most large communities in Canada.

Since the 1960s some craftsmen have moved away from traditional weaving into "art fabric," experimenting with traditional techniques but using a wide range of materials in the production of unique works. They usually sell through galleries, or their work is commissioned for public places and private homes. Two notable weavers, principally in tapestry, Joanna Staniszkis of British Columbia and Micheline Beauchemin of Québec, have been recipients of the Saidye Bronfman award for excellence in crafts.

From prehistory, First Nations and Inuit had a knowledge of basketry, a craft, like weaving, usually undertaken by women. The Salishan peoples of the Northwest Coast have had a long history of textile manufacture, using mountain-goat hair, fireweed and woolly dog hair; most famous are the Chilkat blankets (see Northwest Coast Native Art). Indigenous peoples have revived many of these skills, including basketry, in recent years. The Nootka of Vancouver Island plait grass, cherry and cedar baskets; the Inuit of Great Whale River make lidded baskets of lime grass, often incorporating soapstone knops; the Micmac, Maliseet and First Nations in Ontaria customarily use split ash. The Salish weavers of British Columbia are unique in re-establishing a flourishing home industry, using locally grown wool and natural dyes in their own authentic tradition. All this work, and that of many other talented weavers across Canada, is sought after and the economic effect is considerable, although it may only be a supplementary income for many because of the time, care and skill that are still the hallmarks of the dedicated weaver.

Arts and Crafts Movement in Canada