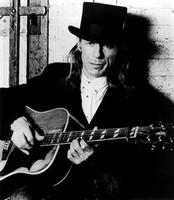 In 1970 Bourne moved to Toronto and became familiar with the Ontario folk music scene, returning to Alberta in the the early 1970s to work as a mechanic in Edmonton while he improved his instrumental skills on guitar and harmonica. He began his professional career as a solo performer in 1975, later forming the duo Sweetgrass with Jim Morrison in 1978. In 1980 he recorded a solo album, Bill Bourne, for CBC Radio, before joining the Scottish traditional band The Tannahill Weavers, with whom he recorded the album Passage (Green Linnet, 1984) and toured Britain, Europe and North America, playing bouzouki, fiddle and bass pedals.

Resuming his career as a solo artist in 1985, Bourne concentrated on songwriting, the fruits of which were evident on his next album, a collaboration with ex-Tannahill Weavers piper Alan MacLeod, Dance and Celebrate (Rynde, 1990), which received a Juno award in 1991. The duo Bourne and MacLeod pioneered an exciting blend of blues and Celtic music and recorded a second CD, Moonlight Dancers (Attic World, 1992), which also received a Juno nomination. Between 1993 and 1996 Bourne worked with violinist Shannon Johnson as the duo Bourne and Johnson, recording two CDs, Dear Madonna (Rynde, 1994) and Victory Train (Free Radio, 1996), for which he received a third Juno nomination.

Returning to his solo career, Bourne next released the CD Bill Bourne - Farmer, Philanthropist & Musician (Blue Streak, 1997), a retrospective of his work with MacLeod and Johnson, and also collaborated with vocalist Hans Stamer and Vancouver guitarist Andreas Schuld on an acoustic blues album, No Special Rider (Blue Streak, 1997). An excellent blues and folk guitarist, Bourne is also a distinctive vocalist and a unique songwriter; among his best-known compositions are "Dance and Celebrate,""Ole Buffalo,""The House,""Pitsberg,""Baggins" and "The Road to Tokyo."