As a child, Winnie Roach excelled in a wide range of sports both on land and in water, but swimming soon emerged as her special talent. At age nine, she won her first long-distance swimming medal at a competition on the Credit River. (See also Mississauga.) At age 11, competing against a much older field, she placed seventh in the CNE one-mile senior women’s championship. Later that year, she captured the Ontario Championship.

As a young adult, she combined a successful swimming career with the demands of family. In 1946, she married Morris Leuszler, a leading aircraftman (LAC) in the Royal Canadian Air Force. The following year, she placed second in the five-mile World Championship swim race in Toronto, only three months after her first child was born. In 1948, she placed second in a five-mile World Championship swim when she was four months pregnant with her second child.

At age 25, the mother of three young children successfully swam the English Channel. The Daily Mail of London, England, invited the Top 20 distance swimmers from around the world to participate in a cross-channel swim from France to England. Roach-Leuszler welcomed the challenge. The task was daunting: the water temperature was a brisk 9ºC and Channel waves were almost 4 m high. On 16 August 1951, Roach-Leuszler crossed the Channel in 13 hours and 25 minutes.

She continued her swimming career after the Channel swim, competing in long-distance events and coaching in both Canada and France. In 1962, she won the French long-distance championship.

In 1996, Roach-Leuszler was inducted into the Canadian Forces Sports Hall of Fame for her achievements in swimming and softball while serving with the Canadian Women’s Army Corps during the Second World War. In 1999, she was inducted into the Ontario Aquatic Hall of Fame and received the Order of Ontario. In June 2000, her hometown inducted her into the Mississauga Sports Hall of Fame. Roach-Leuszler’s English Channel swim was an inspiration to others, including Marilyn Bell, who followed in her footsteps in 1955. Roach-Leuszler passed away at age 78 from diabetic complications. 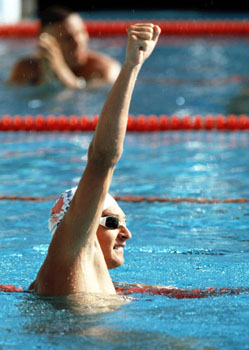