Located in Canada’s interior plains physiographic region, the Milk River cuts through the northern end of Writing-on-Stone Provincial Park. The area is characterized by grassland, riverside cottonwood forests and hoodoos.

The erosional action of the Milk River carved an elaborate network of sheer sandstone bedrock walls. It is on these bedrock surfaces that Indigenous peoples inscribed thousands of individual images.

Who Created the Rock Art?

While researchers believe the majority of the art was created by the Siksikaitsitapi (Blackfoot Nation), other groups passing through the area, including the Cree, A’aninin (Gros Ventre), Assiniboine, Apsáalooke (Crow), Ktunaxa (Kootenay) and Shoshone, may also have made some of the images.

How Was the Rock Art Created?

Although Plains Indigenous peoples had no written language, they developed a sophisticated form of rock art, or picture writing. Two methods were used to make the ancient images at Áísínai’pi. In some cases, the soft bedrock was carved or etched. These carved images are called petroglyphs. The other method was to paint images onto the rock surface with the ironstone mineral hematite, also called red ochre. These images are called pictographs. The paint was applied to the rock with fingers or with a brush made from the soft, porous ends of certain buffalo bones (seePictographs And Petroglyphs).

How Old Are the Images?

Most of the art was created over 3,000 years ago, around 1050 BCE. The depictions of horses and other items introduced toIndigenous Peoplesby Europeans indicates that the art continued to be made after contact.

What Does the Rock Art Depict?

Human beings are commonly depicted in the rock art of Áísínai’pi. Some figures are round-bodied and are believed to be warriors standing behind large shields. Other humans are square-bodied or have hourglass figures and exhibit heart lines and sexual organs. Commonly depicted animals include deer, elk, sheep, skunks, bears, antelope, dogs, snakes and bison. Animals appear by themselves, in groups with other animals and with humans. In some cases, it seems clear that a specific event such as a bison kill or a battle scene is being shown. Horses were often represented; the artists used beautiful sweeping lines to convey their power and speed.

Most rock art can be described as either biographical or ceremonial in nature. Biographical art appears to tell a specific story, such as of a battle or great deed that an individual performed. Some stories feature dozens of individual characters, including people, horses,tipis, dogs and so forth. The artists of these scenes were likely participants in the events depicted. Ceremonial rock art does not tell a particular story but rather features images of powerful figures and spiritual relationships. Most ceremonial art consists of single or a few characters. This style of rock art appears to represent an attempt to communicate with the spirit world. 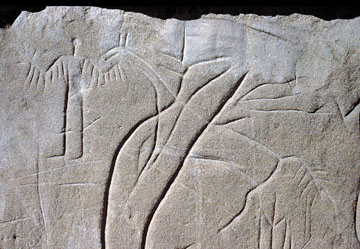 Petroglyphs on the massive sandstone cliffs at Writing-On-Stone Provincial Park. 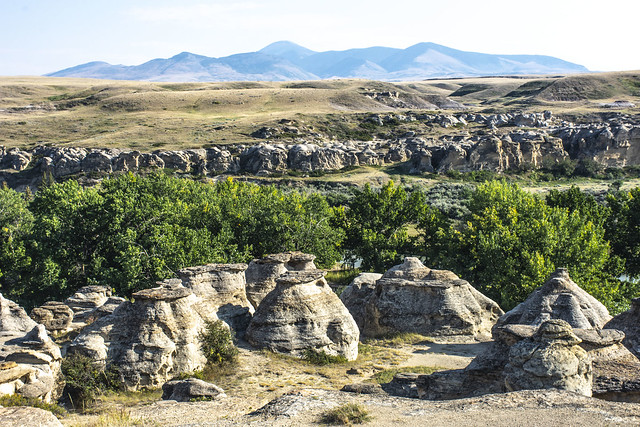