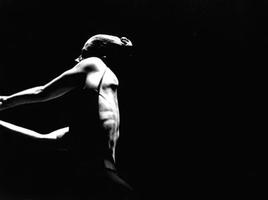 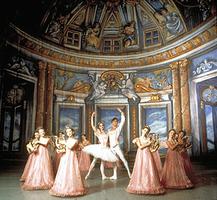 The Alberta Ballet Company was founded in Edmonton in 1958 by Ruth Carse as an amateur troupe under the name of Dance Interlude. It was incorporated in 1961 as the Edmonton Ballet Company and reconstituted in 1966 as a professional dance ensemble under its present name. Carse retired in 1975.

Jeremy Leslie-Spinks succeeded Carse as artistic director in 1975 but his controversial leadership - moving the company in a more contemporary direction - exacerbated by a dire financial crisis, caused him to be replaced the following year by Brydon Paige, who remained until 1988.

Paige gave the company a more classical profile, choreographing versions of well-established ballet scores such as Tchaikovsky's The Nutcracker, Stravinsky's The Firebird and Prokofiev's Cinderella. Paige also featured works by outside choreographers and by the company's own Lambros Lambrou.

In a controversial move, Alberta Ballet's board of directors hired an outsider, Ali Pourfarrokh, to succeed Paige in 1988. There was a sizable turnover in the 20-member troupe's roster of dancers. Even so, Pourfarrokh, who stayed for a decade, proved to be a successful artistic director who helped Alberta Ballet overcome its provincial image and achieve some measure of national credibility. He also oversaw the company's move from Edmonton to Calgary and its 1990 merger with the Calgary City Ballet.

Although Pourfarrokh staged two full-length narrative works for the company - The Nutcracker (1995) and Romeo and Juliet (1998) - his overall tendency was to refocus the company away from story-ballets and spectacle towards a more streamlined, neo-classical image with an emphasis on new works and 20th-century classics. With a board of directors and administration intent on maintaining the company's fiscal stability, Pourfarrokh had to work within tight restraints. Even so, he was successful in giving the company a new artistic image and in improving the overall standard of dancing. He regularly contributed new work to the repertoire and sought out emerging choreographic talents, such as Canadian Crystal Pite and American Robert La Fosse. Pourfarrokh's interest was in dance innovation, yet he also demonstrated considerable market savvy; for example, he commissioned popular American choreographer Peter Pucci to create a very accessible work, Lifted by Love (1994), to the songs of Albertan k.d. Lang.

Today, the company is housed in Calgary's historic Nat Christie Centre but continues to maintain a presence in Edmonton, staging regular seasons there in sequence with its Calgary performances. Although the company had an associated school during its Edmonton days, the move to Calgary prompted the founding in 1991 of the Alberta Ballet School of Dance as the company's official teaching arm. It offers regular and summer school classes for its students in both classical and contemporary idioms. Under Pourfarrokh's direction, the company also undertook more extensive touring within Canada and to the United States. Pourfarrokh retired at the end of the 1997-98 season. He was succeeded by the Finnish-born Mikko Nissinen, a former star of the San Francisco Ballet.

From the outset, Nissinen's expressed goal was to push Alberta Ballet "to the next level." He improved the overall standards by introducing guest teachers and by programming works, particularly those of George Balanchine, that challenged the dancers and developed their classical technique. Nissinen also emphasized creativity by regularly commissioning new work from Canadian and foreign choreographers. Dancer turnover was high under Nissinen's leadership. Within three years the troupe had been largely repopulated. His forceful leadership was at times controversial, yet critics praised the noticeably improved dancing and the way Nissinen gave Alberta Ballet a more distinct artistic personality and visible presence on the national dance scene. Early in his directorship, Nissinen led the company on a tour of China, and in his final year he took the company to his native Finland and also to Egypt. Nissinen also forged an alliance with Ballet British Columbia that enabled the two companies to combine forces for an annual touring production of The Nutcracker.

As in the Pourfarrokh era, the company's progress continued to be constrained by inadequate funding, and in 2001, after many years of balanced budgets, the company posted a large deficit, in part because of tour cost overruns and an inability to increase private donations.

In September 2001 Nissinen resigned and was succeeded by Jean Grand-Maître, a Canadian choreographer whose career had until then been largely pursued in Europe. Despite a depressed economy and the imperative need to eradicate the company's deficit, Grand-Maître was able to establish himself quickly as a vital and popular presence within Alberta Ballet.

By the end of Grand-Maître's second season in 2004, Alberta Ballet had not only eliminated its deficit but accumulated a significant surplus that helped it through a difficult 2004-05 season, when both its large provincially owned venues in Edmonton and Calgary were closed for renovation. Grand-Maître has led the troupe on several Chinese tours and long-overdue return visits to Montréal and Ottawa.

Grand-Maître's choreography has propelled the company forward. His early programming choices have generally met with box office success, particularly his own dance adaptation of Bizet's Carmen (2003) and the staging of Prokofiev's Romeo and Juliet (2005). Alberta Ballet has also acquired several works Grand-Maître originally created for other companies. He earned acclaim and considerable attention for his ballet Joni Mitchell's The Fiddle and the Drum (2007) in collaboration with Joni Mitchell. He then earned glowing reviews by turning to the life and music of Sir Elton John for inspiration in Love Lies Bleeding (2010), a risqué production about homosexuality and tolerance.

Under Grand-Maître's direction, Alberta Ballet has grown in size and stature. The company was seen by billions of viewers when it performed Grand-Maître's choreography for the opening ceremonies of the Vancouver 2010 Olympics. Dance Magazine called the company "the Canadian troupe to watch."