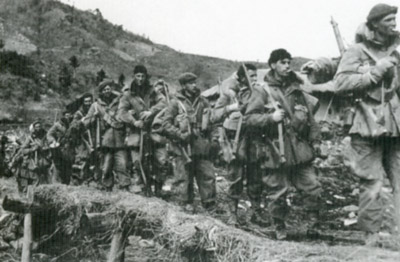 The 2nd Battalion of the Princess Patricia’s Canadian Light Infantry Regiment (2PPCLI) arrived in Korea in December 1950, under the command of Lieutenant Colonel Jim Stone, a Second World War veteran (see Korean War). The battalion had initially been deployed when the war was quieting down, with North Korean forces being pushed across their border back into the North. The Canadians were prepared for little more than carrying out garrison duty.

The war was subject, however, to wild swings in momentum. Stone quickly had his men trained up to fight with other United Nations forces against what would become a renewed enemy offensive in the spring of 1951, after China entered the war on the Communist side (see Korean War Timeline). 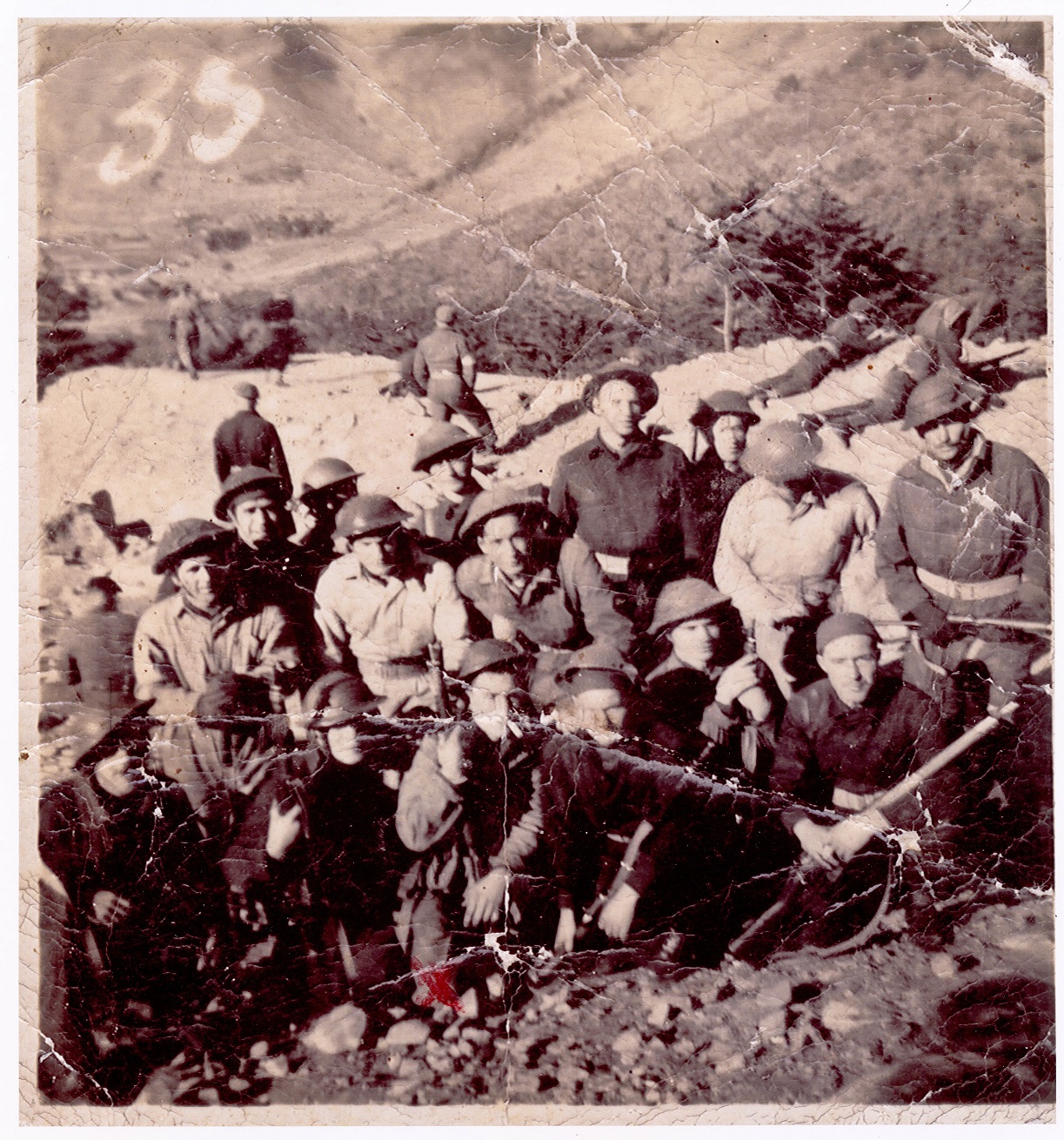 Lyle McIvor is front row, centre and with the cigarette in his mouth. To his right is Robert Tolver who died during the Battle of Kapyong.
PreviousNext

The battalion was attached to the 27th British Commonwealth Infantry Brigade. It was soon thrown into a series of skirmishes and battles in the winter of 1951, learning how to fight on the harsh, hilly terrain of Korea, as UN forces tried once again to remove the Chinese and North Koreans from the South. 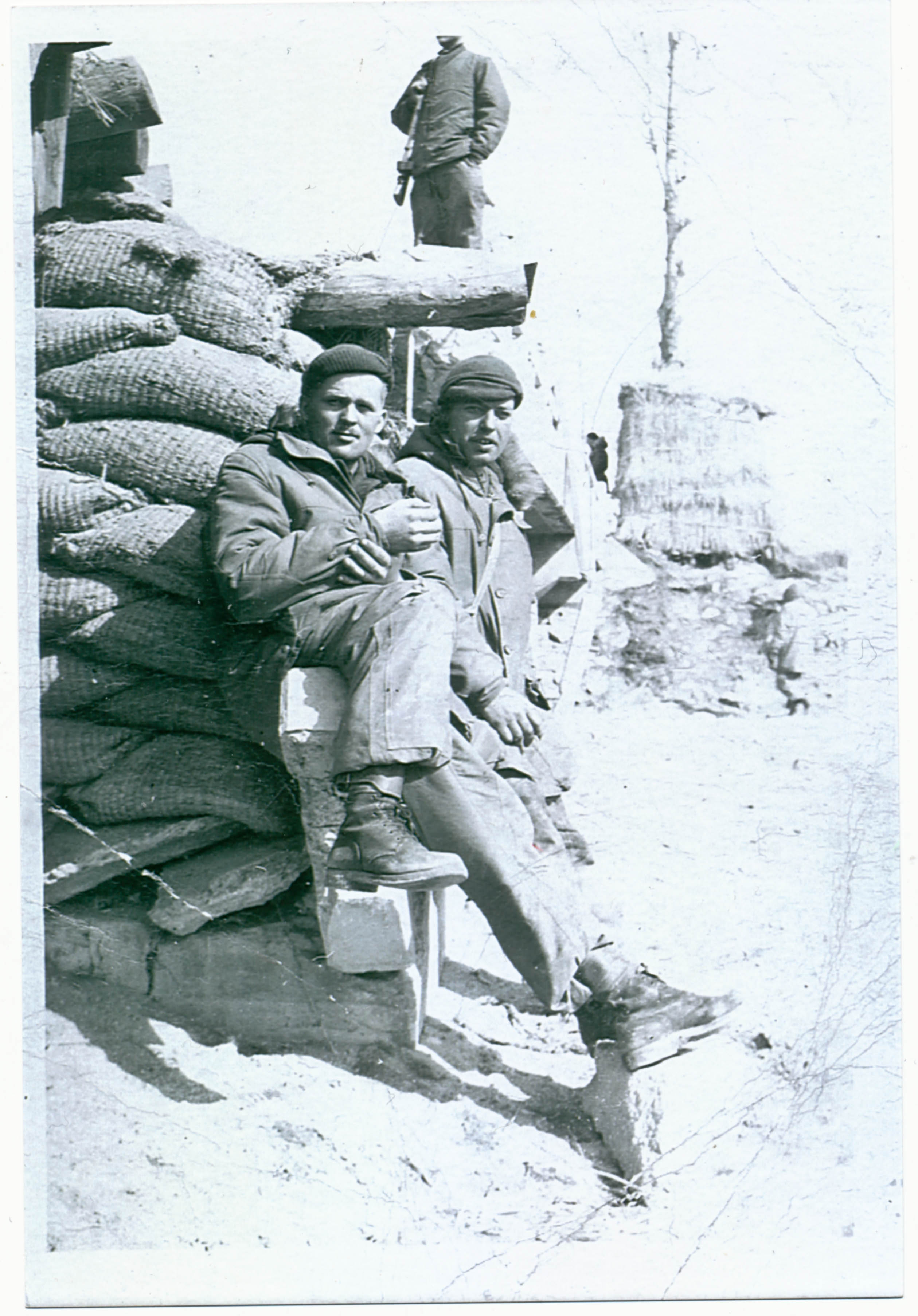 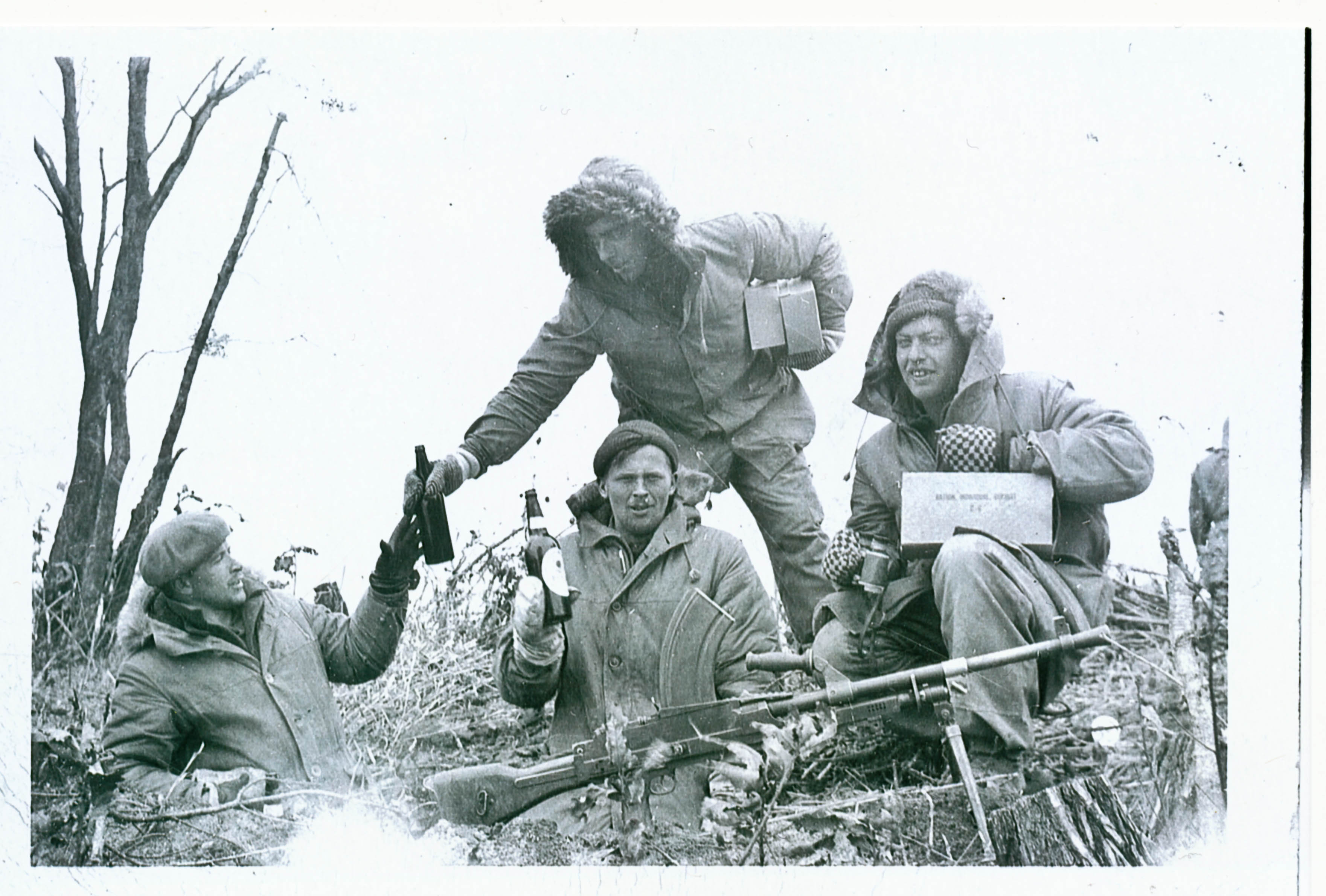 In mid-April, the Chinese withdrew just past the 38th parallel. This was part of a plan to lure UN forces into a position where they would be vulnerable to a major counterattack, which was unleashed on the South Korean army on 22 April 1951. The South Koreans were dislodged by the Chinese offensive, and the following day the British brigade was ordered to protect the South Korean withdrawal through the Kapyong River valley (about 20 kilometers south of the 38th parallel in central Korea).

Did you know?
Near the end of the Second World War, the Japanese-held Korean peninsula was liberated by both Soviet and American armed forces. Soviet troops occupied the country north of the 38th parallel, with the Americans to the south. After the war, the pro-West Republic of Korea (ROK) was then founded in the south and not long after, the communist Democratic People’s Republic of Korea was declared in the north (see Korean War).


2PPCLI and the 3rd Battalion of the Royal Australian Regiment were assigned forward hilltop positions, the Canadians on the west side of the valley and the Australians on the east.

The Australians bore the brunt of the initial attack and after heavy combat were forced to withdraw, with 155 casualties, late on 24 April. While the Australians fought, Stone ordered his Canadians, about 700 troops, to dig in on Hill 677 and prepare to repel a large brigade of massing Chinese forces, estimated at nearly 5,000-strong. After attacking the Australians, the Chinese turned their attention to the PPCLI, which managed — through heavy all-night fighting on 24 and 25 April — to stop the Chinese advance.

So where I was, I could see the Glosters [Glouchestershire Regiment] got it first over on the far side and then over this way from them, the Australians, the Royal Australian Regiment, was down below the hill on another knoll, they were lower down. I could see them gettin' it that day and down there at night. But then the Glosters got completely run over in their valley and then the Australians, they finally got so bad they had to pull back, so leavin’ that open. And then the Chinese came around from both sides and that's how we got surrounded there because none of our flanks were open. (Lyle McIvor served with 2PPCLI during the Korean War.)

At one point in the battle, 400 Chinese soldiers descended on a single Canadian company of roughly 100 men, but the attack was repelled. Private Wayne Mitchell, despite being wounded, charged the enemy three times with his Bren gun. He earned the Distinguished Conduct Medal for his efforts (see Medal).

The Chinese launched most of their attacks at night, in successive waves, using an intensive and aggressive approach of mortars, grenades and machine gun fire close to the Canadian front. On the night of 24 April, the Canadian battalion headquarters was attacked, and the assault was repelled with heavy fire.

The relentless waves of Chinese soldiers almost overran the position of D Company. With his men securely entrenched below ground, company commander Captain J. G. W. Mills, desperate and overrun, called for an artillery strike on the position of his own 10 Platoon. He relayed the request from Lieutenant Mike Levy, who was hunkered down with his men in shallow foxholes on the hill. A battery of New Zealander guns obliged, firing 2,300 rounds of shells in less than an hour, destroying the Chinese forces on that position. Though the barrage landed just metres from Levy’s position, he and his men were unscathed. Levy wasn’t recognized for his bravery until 2003, when Governor General Adrienne Clarkson granted him a coat of arms.

The following night, Private Kenneth Barwise recovered the lost Vickers machine gun position in D Company, grabbed the gun, and ran back to his platoon. He had also single-handedly killed six Chinese soldiers during the attack on D Company, earning the Military Medal.

Amid the fighting, Stone refused to allow his men to withdraw, as he believed the hill was a critical strategic point on the UN front. This stemmed the tide of the Chinese offensive. While they defended the hill, the Canadians were cut off and had to be supplied via air drop. As Canadian soldier Gerald Gowing remembered: "We were surrounded on the hills of Kapyong and there was a lot of fire. We were pretty well out of ammunition and out of food too. We did get some air supplies dropped in, but we were actually surrounded… that was a scary moment, let me tell you."

The holding action of the Australians and Canadians at Kapyong allowed the UN forces to consolidate their troops for the next stage of operations. They had fought tenaciously against a Chinese army with a force several times their size. Stone, and other veterans of the Second World War, utilized their experiences fighting on the rugged terrain of Sicily and Italy (see The Italian Campaign) and applied it to the hills of Korea to good effect, but at a price.

Ten Canadian soldiers were killed and 23 wounded during the battle. Australian losses were higher (32 killed, 59 wounded), while the Chinese force suffered an estimated 2,000 casualties.

The battle contributed significantly to the defeat of the Chinese offensive against the South that spring, protecting the capital city of Seoul from re-occupation, and plugging the hole in the UN line to give the South Koreans time to retreat. The wider Communist offensive of 1951 was halted about a week after the battle, and from that point on the Korean War became largely a war of patrols and enemy harassment, rather than large-scale attacks, as the front lines stabilized and the two sides embarked on peace talks.

Both the Canadians and the Australians received the United States Presidential Unit Citation from the American government. It was the first time a Canadian unit had been so honoured. Canadian participation in the Korean War is honoured at the Canadian Korean War Memorial Garden, which is located just below the hills defended by Canadian Forces in the Battle of Kapyong.