Women served in the Royal Canadian Navy (RCN) throughout the Cold War. Known for much of this period as “Wrens,” they played an important role in RCN missions and operations, including antisubmarine warfare. In 1951, the Canadian Naval Reserve began recruiting women into the service. Women could join the regular navy beginning in 1955; the RCN was the first Commonwealth navy to integrate women into the permanent force. For many years, Wrens served in shore-based branches and trades, including stores, communications, intelligence, submarine detection and in the medical services. By the end of the Cold War, all naval trades and occupations, except submarine service, were open to women. (See also Canada and the Cold War; Women in the Military.)

Women served in the Royal Canadian Navy (RCN) throughout the Cold War. Known for much of this period as “Wrens,” they played an important role in RCN missions and operations, including antisubmarine warfare. In 1951, the Canadian Naval Reserve began recruiting women into the service. Women could join the regular navy beginning in 1955; the RCN was the first Commonwealth navy to integrate women into the permanent force. For many years, Wrens served in shore-based branches and trades, including stores, communications, intelligence, submarine detection and in the medical services. By the end of the Cold War, all naval trades and occupations, except submarine service, were open to women. (See also Canada and the Cold War; Women in the Military.) 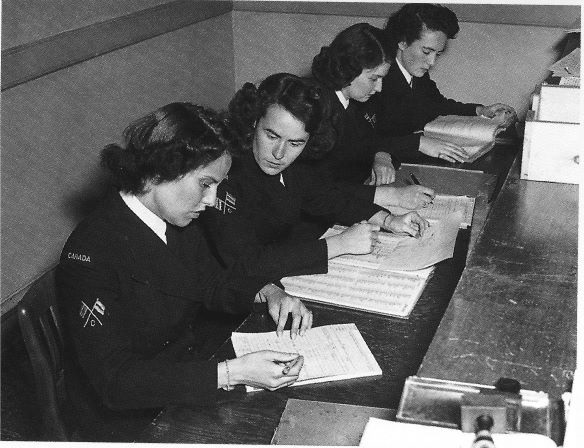 The Women’s Royal Naval Service, abbreviated as WRNS and popularly known as “Wrens,” was the British model the RCN followed for its own women’s service. The nickname Wrens carried over to the Canadian service and continued the British tradition.


Although some women were happy to return to civilian life, others were disappointed. Moreover, some senior officers, both male and female, supported the continued involvement of women in the services. The pressure grew as Canadian military commitments increased. Between 1949 and 1951, Canada’s armed forces grew by 70 per cent owing to NATO missions in Europe and involvement in the Korean War. Canada faced a labour shortage, one that women could help fill. When the Korean War broke out in 1950, many veterans of the WRCNS, RCAF (WD) and CWAC tried to re-enlist. They were soon able to do so: in 1951, the air force, army and navy were authorized to recruit women.

In May 1951, the Canadian Parliament authorized the recruitment of women to the Naval Reserve. As in the Second World War, naval servicewomen were known as Wrens. Unlike women who served in the war, however, these Wrens were full members of the reserve and received the same basic pay as men. In 1946, Acting Captain Adelaide Sinclair had strongly recommended equal pay in her report on the Second World War WRCNS. According to Sinclair, it was both ethical — because Wrens had proven as good as, or in some jobs, superior to, male sailors — and more economical, as it would simplify administration. Only single women, however, could enroll in the naval reserve. If a Wren became pregnant, she was released as medically unfit for service. This finally changed in 1971, when women could enroll if married and could remain in the service after childbirth.

Recruiting started in July 1951 and the new Wrens were trained at HMCS Cornwallis in Deep Brook, Nova Scotia. In the first year, 369 officers and other ranks joined; many were veteran Wrens from the Second World War. The numbers fluctuated over the next few years, between approximately 300 and 400. Most signed up for three or five years. Many of the Wrens served full-time in the reserve on what was known as Continuous Naval Duty (CND). This was particularly the case in the Communications Branch, where demand was high.

One of the women’s barracks at HMCS Cornwallis was named after another “stone frigate,” HMCS Conestoga, a Second World War training centre for Wrens that was decommissioned in 1946. Lieutenant-Commander Isabel Macneill, who became commanding officer of HMCS Conestoga in 1943, was the first woman to command a commissioned “ship” in Canada. 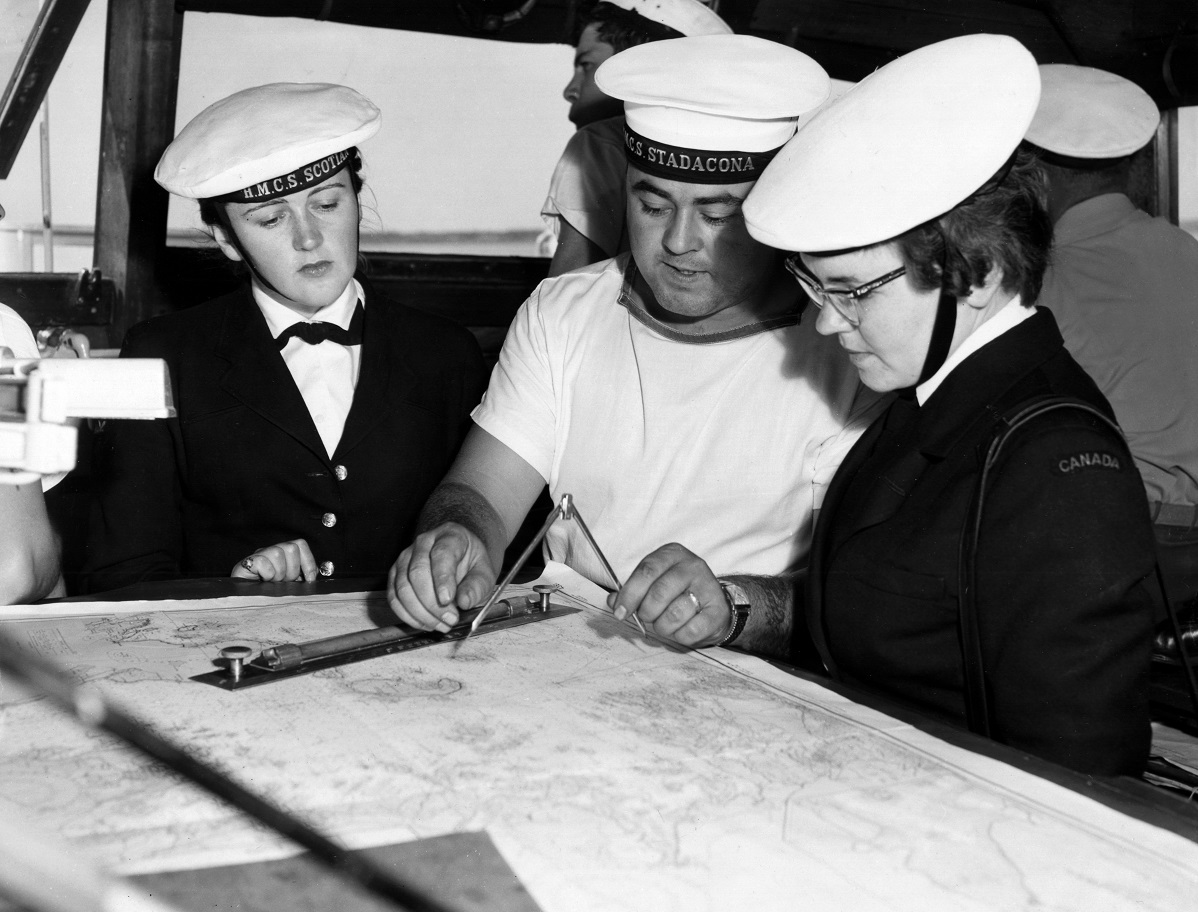 In 1954, Commander Isabel Macneill, a veteran of the Second World War, became Staff Officer (Wrens) to the Chief of Naval Personnel. Macneill was tasked with helping establish a permanent female component in the RCN. On 26 January 1955, Cabinet approved the recruitment of women into the RCN and in February, the Department of National Defence announced the creation of a women’s section. This was the first time that women were integrated into the permanent force in a Commonwealth navy. (The RCAF began enrolling women in its regular force in 1951 and the Canadian Army in 1954.)

There were conditions, however. The navy set a limit of 400 Wrens, who could only be employed in trades that would not negatively affect the career prospects of male sailors. They were also restricted to shore-based trades and occupations, with few exceptions. The first group comprised 35 officers and 365 Wrens; many transferred from the RCN(R). 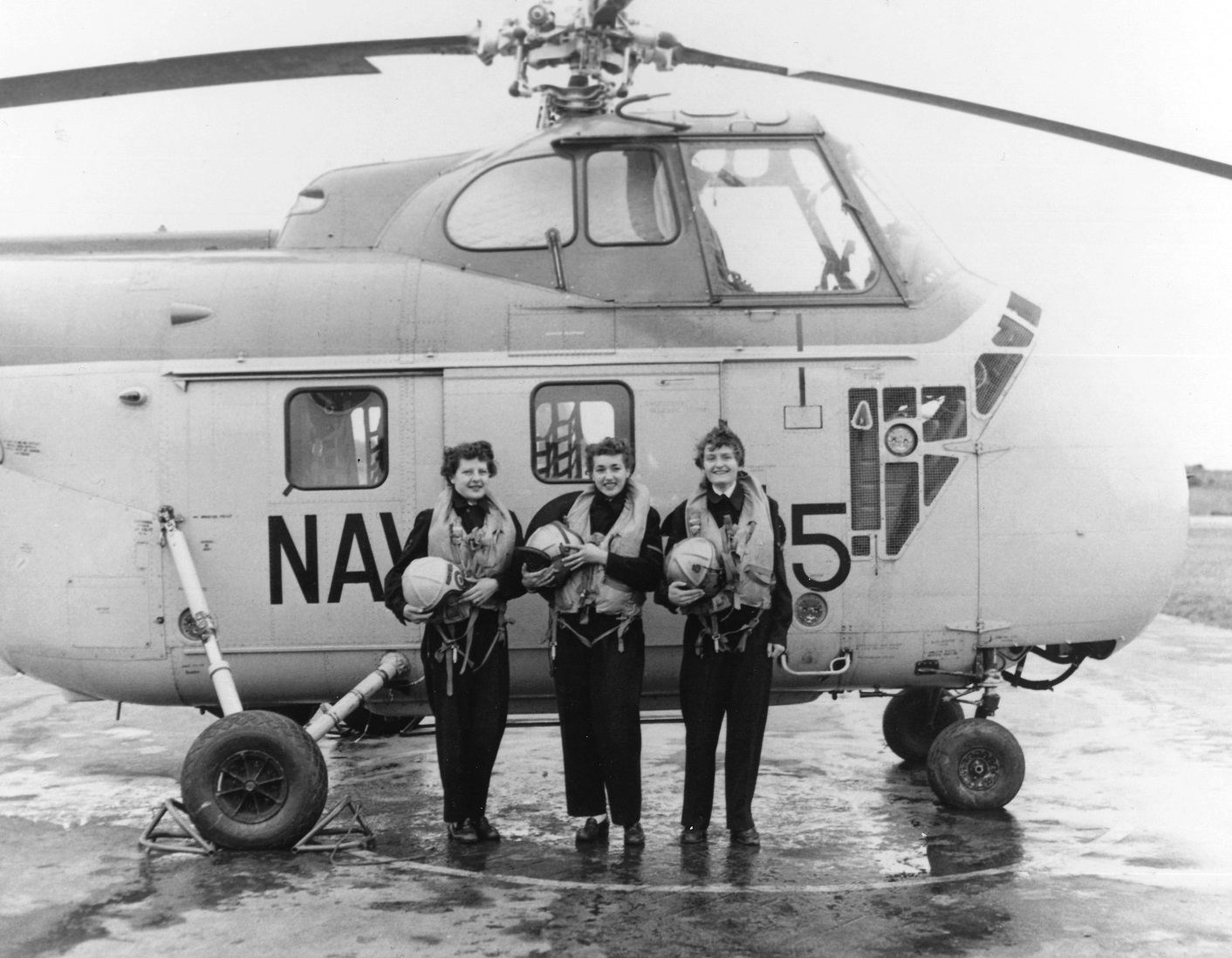 Wrens worked ashore in many different trades and occupations, including administration, finance, stores, intelligence, communications and in the medical branch. They served in Ottawa, Esquimalt and Halifax, and at bases such as HMCS Coverdale in New Brunswick and HMCS Cornwallis and HMCS Shelburne in Nova Scotia.

Some were involved in antisubmarine warfare, which was a crucial part of Canada’s commitment to NATO and continental defence. Many Wrens served at HMCS/CFS Shelburne, one of the SOSUS network of passive sonar stations that monitored Soviet submarine activity in the Atlantic Ocean. Indeed, when Shelburne began operating as a NAVFAC in 1955, the staff included five Wrens. (The US Navy didn’t assign women to NAVFACs until 1972.)

When women were integrated into the RCN in 1955, Wren officers were finally permitted to wear gold braid with the executive curl, like their male colleagues. In 1968, however, they lost it again (as did their male colleagues) when the Canadian armed forces were unified. The navy also lost its “royal” designation. Both were reinstated in 2011.

In 1968, the Canadian Forces Reorganization Act came into effect. The Royal Canadian Navy became Maritime Command of the Canadian Armed Forces, and the Wrens officially became “servicewomen.” Unofficially, the term “Wrens” persisted into the 1980s. Women were fully integrated into the forces, but some trades and occupations were still closed to them; moreover, they still couldn’t serve at sea in the 1960s.

In the ensuing years, more trades and occupations became open to women in the armed forces, as in civilian life. In 1971, the Royal Commission on the Status of Women recommended that all trades be open to women. Within the same decade, the Canadian Human Rights Act (1978) forbade discrimination on the basis of gender, among other grounds. Employers could, however, exclude some jobs if there was a “bona fide occupational requirement” for doing so. Operational considerations continued to be a concern in the armed forces. In the navy, this included space limitations on board HMC ships and the effectiveness of mixed gender crews. 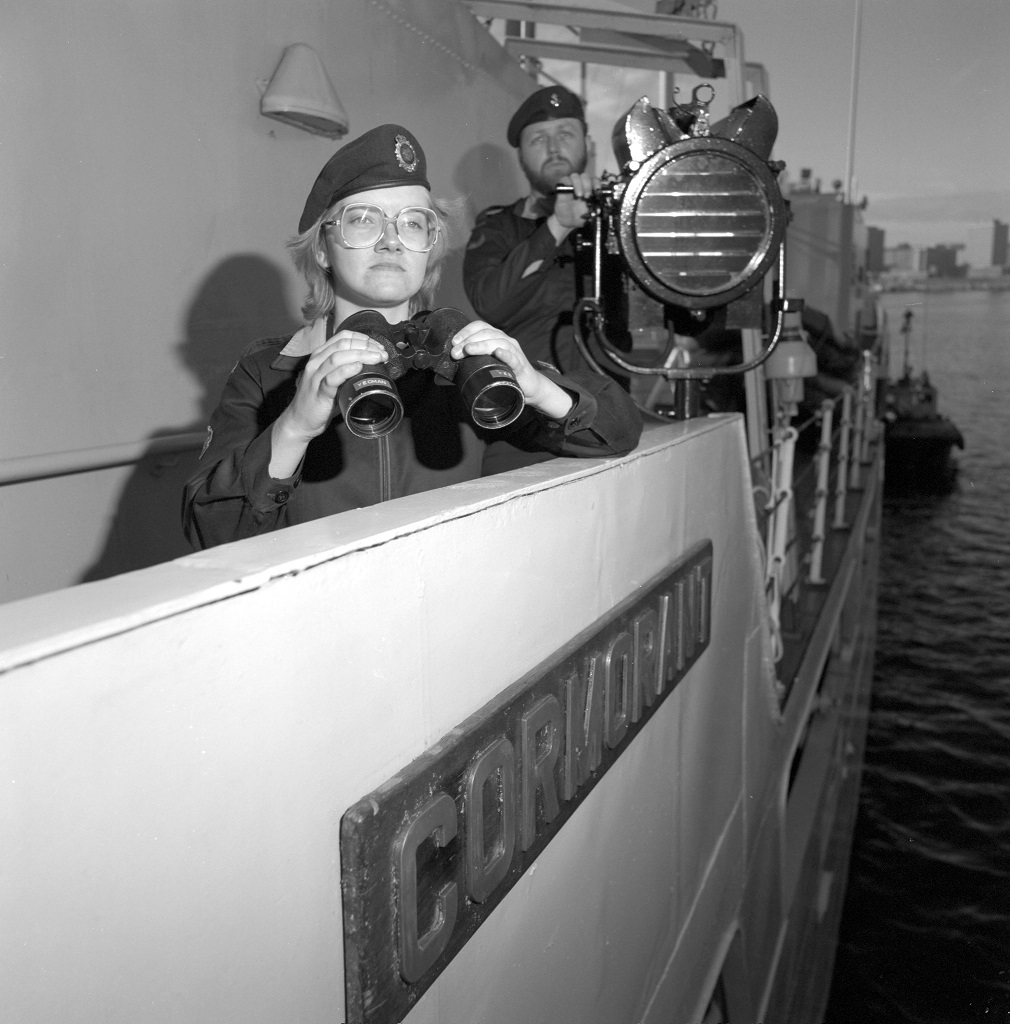 In the early 1980s, the Canadian Forces implemented the Servicewomen in Non-Traditional Environments and Roles (SWINTER) trials to evaluate the employment of women in “near-combat” units in the regular force. This included a SWINTER sea trial on the diving tender HMCS Cormorant from 1980 to 1984. Following the SWINTER trials, the CF announced that women would be allowed to serve in some regular force units and occupations previously restricted to men, including auxiliary oil replenishment ships, maritime patrol squadrons and maritime reconnaissance squadrons. They still could not, however, serve on destroyers.

Women in the naval reserves began serving on ships in the late 1970s.


The pressure to fully integrate the armed forces increased, particularly after the Equality Rights section (15) of the Canadian Charter of Rights and Freedoms came into effect in 1985. In 1987, the Canadian armed forces announced the Combat Related Employment of Women (CREW) trials and started recruiting women into combat trades and units. In 1989, after a ruling from the Canadian Human Rights Tribunal, all military occupations were opened to women. The only exceptions were submarine service, which opened to women in 2001, and Roman Catholic chaplains. By the end of the Cold War, women could serve in almost every trade and vessel in the Canadian navy. ( See also Canadian Women in the Military.) 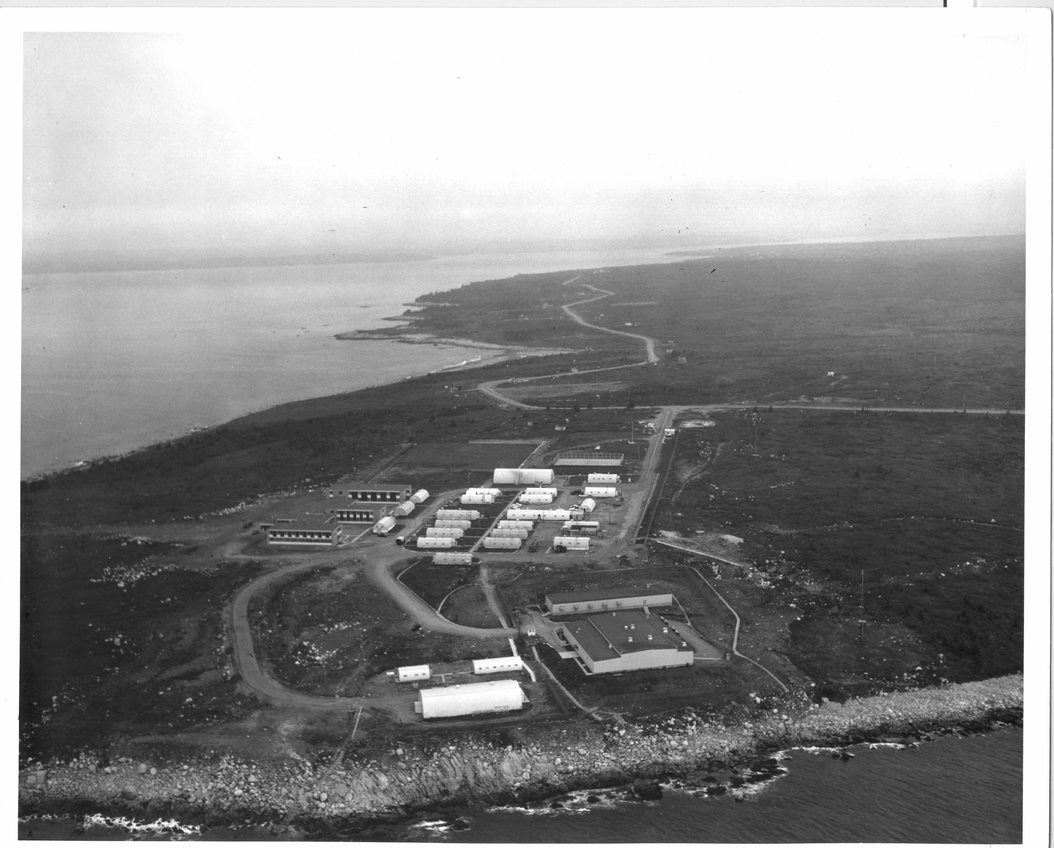