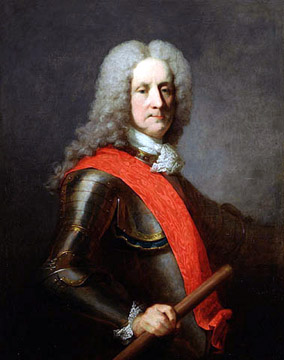 Charles de Beauharnois was born into a wealthy and well-connected French family. They owned large tracts of land and enjoyed the benefits of Royal office appointments. He was an officer in the French Navy for 20 years and saw action in various wars and eight major battles. In 1703, Beauharnois was appointed captain of his first ship, the Seine. He later commanded others and received the distinguished knight of the order of Saint-Louis for courage and virtue in 1718. In 1741, he was promoted to rear-admiral.

At age 46, Beauharnois married Renée Pays, the wealthy widow of one of the King’s counsellors. Through his marriage, Beauharnois took control of a substantial amount of money and investments. These included an estate with sugar plantations worked by enslaved people in the colony of Saint-Domingue (Haiti).

Beauharnois’s marriage was unhappy. In 1719, after only three years together, his wife sued for a legal separation. Her adult children sued for control of their inheritance. Beauharnois replied with countersuits; the legal battles raged for years. The children were eventually afforded a portion of the money they demanded. Pays died in 1744, having never won her separation.

In February 1726, the King appointed Beauharnois to succeed Philippe de Rigaud de Vaudreuil as governor of New France. Beauharnois arrived in Quebec City in August. The colony’s most important challenge at the time was dealing with the terms of the 1713 Treaty of Utrecht; it had ended British and French hostilities in the War of the Spanish Succession (1701–14). The treaty had given Britain control of Newfoundland, Acadia (New Brunswick and Nova Scotia), Hudson Bay, and fur trading routes down the Ohio Valley. The treaty marked the end of French expansion in North America and the beginning of British dominance.

When Beauharnois became governor of New France in 1726, the western fur trade had been temporarily halted by the first French-Fox War (1712–16). In 1727, to establish more trade with the Sioux, Beauharnois sent an expedition to establish a fort on the upper Mississippi River. The move sparked another confrontation with the Meskwaki (Fox) nation; it hailed from west of Lake Michigan’s Green Bay and was an enemy of the Sioux. For these reasons, the Meskwaki reacted to Beauharnois’s initiative with violence. They killed Illinois and French traders and threatened the Sioux.

In 1728, Beauharnois dispatched 1,700 French troops and Indigenous warriors to the Meskwaki territory. This second French-Fox war was devastating for the Meskwaki. French forces burned their villages and either killed fleeing refugees or sold them into enslavement. Beauharnois, who personally owned 27 enslaved people in New France, sentenced Meskwaki Chief Kiala to slavery in Martinique. He also promoted Jean-Charles D’Arnaud for killing his Meskwaki prisoners rather than enslaving them. By 1735, the Meskwaki nation was in ruins. Many historians consider Beauharnois’s action against the Meskwaki a genocide.

When Beauharnois wasn’t feuding with various intendants of New France, he was preparing for the next, inevitable French-English war. He had Quebec City’s fortifications enhanced and saw to the long-delayed completion of the stone wall surrounding Montreal. He also protected New France’s southern territory by building Fort Saint-Frédéric, at the southwestern end of Lake Champlain.

In June 1744, news arrived in Quebec City that France and Britain were again at war. It marked the third phase of the War of the Austrian Succession, called King George’s War (1744–48). A major impetus of the war was to determine which of the great powers would control North America. Beauharnois ordered the construction of more defensive fortifications at Quebec City, an earthen works palisade along the Saint-Charles River, signal stations along the St. Lawrence, and reinforcements of the forts at Niagara and Kingston.

Three years of bad harvests challenged his ability to ensure a reliable food supply for the people of Quebec; sufficient trade goods to maintain the loyalty of Indigenous allies; and provisions to support large military actions. Beauharnois nonetheless ordered raids on British settlements at what later became Charlestown, New Hampshire; Schuylerville, New York; and Williamstown, Massachusetts. There was little bloodshed, but houses and crops were burned. They were followed by limited attacks and counterattacks on a number of French and British forts and settlements. Among the most significant took place in February 1747; 500 French, Mi'kmaq, and Acadians retook Grand-Pré, in Acadia, in a 12-hour battle fought in a blinding snowstorm. The French victory forced the British to withdraw to Annapolis Royal.

Beauharnois offered no support when the British attacked the Cape Breton Island fortress, Louisbourg. He failed to appreciate the value of the fort for its role in trade, commerce, fishing and defence, and left it woefully undermanned. In the most stunning military defeat of the war, Britain took Louisbourg on 15 June 1745. Its capture afforded Britain a fortified base from which it could disrupt French communications and trade. Several failed attempts were made to recapture Louisbourg, which remained with the British.

Beauharnois negotiated with Indigenous allies throughout the war. For three successive years, insufficient munitions and trade goods reached Quebec, mainly due to the breakdown in the supply chain that followed the loss of Louisbourg. This allowed the better supplied New England colonies to offer better prices and trade goods to Indigenous nations. Alone among the nations of the Six Nations Confederacy, the Haudenosaunee (Iroquois) decided to remain neutral. Other nations that had long been French allies switched sides; they engaged in skirmishes that killed French traders and burned French settlements. In March 1747, Beauharnois declared war on the Kanyen'kehà:ka (Mohawk). In June 1747, a French force defeated an outnumbered Mohawk party at Châteauguay.

The loss of Louisbourg and the deterioration of New France’s relationships with its Indigenous allies, both of which occurred under Beauharnois, greatly contributed to the eventual conquest of New France in the early 1760s. Beauharnois returned to France in October 1747. He died in Paris in 1749. A town near Montreal bears his name, as does the Beauharnois Generating Station southwest of Montreal, one of the world’s biggest hydroelectricity facilities.