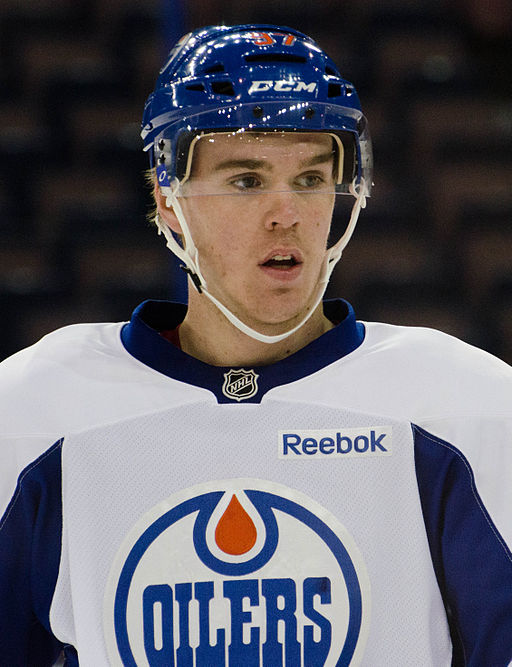 Connor McDavid grew up in Newmarket, Ontario. Along with his older brother, Cameron, he is one of two sons of Brian and Kelly McDavid. Growing up near Toronto, McDavid loved the Toronto Maple Leafs, though his favourite player was Sidney Crosby of the Pittsburgh Penguins. Like Crosby, McDavid wears his birth year on his jersey (in McDavid’s case, number 97).

McDavid learned to skate at age three and began playing hockey at age four, demonstrating an immediate affinity for the game. By the time he was six years old, he was dominating nine-year-old players in a league in nearby Aurora.

McDavid had a highly successful minor hockey career. Coached by his father, he won four consecutive Ontario Minor Hockey Association (OMHA) titles with the local York Simcoe Express. To further his development as a budding hockey star, he played bantam and midget hockey for the nearby Toronto Marlboros in the Greater Toronto Hockey League (GTHL). In his final season in midget hockey, he scored 33 goals and 39 assists and was named the GTHL Player of the Year.

Following his success in minor midget, McDavid applied for — and was granted — exceptional player status from Hockey Canada for the Ontario Hockey League (OHL) draft. This allowed him to be drafted at age 15 — a year earlier than normal. He was only the third player to be granted this status. The previous two players, John Tavares and Aaron Ekblad, were drafted first overall into the OHL and National Hockey League (NHL).

In his third and final year with Erie (2014–15), McDavid finished third in league scoring with 120 points, even though he only played in 47 games. He followed that up with a dominant playoff performance in which he scored 49 points in 20 games. He was named playoff MVP, even though the Otters were defeated in five games in the OHL finals by the Oshawa Generals, who eventually won the Memorial Cup. In three seasons with the Otters, McDavid scored 285 points in 166 regular season games, as well as 68 points in 34 playoff games.

Leading up to the 2015 NHL Entry Draft, McDavid was hailed as a generational talent, along the lines of Sidney Crosby, Mario Lemieux and Wayne Gretzky — the sort of player who could alter the fortune of a franchise. The 28th-placed Edmonton Oilers won the draft lottery and drafted McDavid first overall. Upon his arrival, he immediately became the face of the franchise.

In his first season in the NHL, McDavid lived up to the considerable hype, scoring 48 points in 45 games. Following the season, he finished third in voting for the Calder Memorial Trophy as the NHL’s top rookie, despite missing 37 games due to injury.

Prior to the 2016–17 season, McDavid became the youngest captain in NHL history, at 19 years and 266 days — 20 days younger than the previous youngest captain, Gabriel Landeskog of the Colorado Avalanche. In his first season as captain, McDavid scored 100 points, winning both the Art Ross Trophy as the NHL’s leading scorer and the Hart Memorial Trophy as the league MVP. He was also awarded the Ted Lindsay Award as league MVP as voted by his peers. He led the Oilers to their first playoff appearance since the 2006 Stanley Cup Final, defeating the San Jose Sharks in the first round before losing in Game 7 to the Anaheim Ducks. After the season, McDavid signed an eight-year contract extension with the Oilers worth $100 million. At $12.5 million per season, the contract gives him the highest average salary in NHL history.

In 2017–18, McDavid again led the league in scoring with 108 points, claiming his second consecutive Art Ross Trophy and Ted Lindsay Award. However, despite his remarkable season, the Oilers failed to qualify for the playoffs.

McDavid has represented Canada multiple times at the international level. He won his first international gold medal at the 2013 IIHF Ice Hockey U18 World Championship. In 2014, McDavid played in his first IIHF World Junior Championship, where Canada struggled to a disappointing fourth-place finish. The following year, McDavid returned to the World Juniors and won gold.

McDavid has also played twice for Canada at the IIHF World Hockey Championship. In 2016, he won a gold medal with Canada. Two years later, he returned to the tournament as the captain of Team Canada, which placed fourth.

At the 2016 World Cup of Hockey, McDavid was named captain of the under-23 Team North America, a team composed of the best players from Canada and the United States, which finished the tournament in fifth place.