This article was originally published in Maclean’s magazine on February 28, 2000. Partner content is not updated. 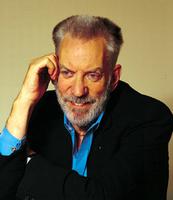 Sutherland has gone on from a Nova Scotia boyhood to make over 100 movies (photo by Peter Bregg/Maclean's).

Donald Sutherland's blue eyes switch to low beam as he stares into space. His lips curl into a mischievous grin. Having just been asked, "What advice would you give the actor you were at 20?" the Canadian-born star is conjuring up his former self, the ambitious kid from Nova Scotia. Sutherland lets the question simmer as he sits in the manager's office of Toronto's Royal Alexandra Theatre. Then his face lights up. "Humility," he says, savouring the simplicity. "Be humble. But who would ever listen at 20? How can you explain that life is very short and you have to cherish what you have."

This seems an appropriate time for Sutherland to contemplate the past. The 64-year-old actor, who got his start on the stage, has returned to the theatre after a 19-year absence. He stars in Enigma Variations, which opened on Feb. 17 at the Royal Alex and runs until April 1. The production is very much a family project. The play, by French dramatist Eric-Emmanuel Schmitt, was translated by Sutherland's 26-year-old son, Roeg (named after director Nicolas Roeg). It is produced by his partner of 28 years - and wife since 1997 - French-Canadian actress Francine Racette, with whom he has three boys, Roeg, Rossif and Angus (he also has twins Kiefer and Rachel by his second wife, Canadian actress Shirley Douglas). Sutherland last appeared onstage in a 1981 Broadway production of Lolita adapted by American playwright Edward Albee. "When I did Lolita, it was wonderful because I could have a family life," he recalls. "I wasn't going off on location. After the show, we could go out for dinner, just everyday things. We wanted to repeat that."

Sutherland was introduced to Enigma Variations by his wife, who discovered the mystery-comedy in 1997 when it was a hit in Paris (where the couple, based mainly in Los Angeles, keep an apartment). Inspired by and named after music by turn-of-the-century English composer Edward Elgar, the work is a witty blend of philosophy and passion. Racette telephoned Sutherland (who was in North Carolina filming a movie) and encouraged him to hop on a plane to see the play. "I thought it was terrific," says Sutherland. "And my wife took an option. She has a very good eye - with films, with furniture, with everything. I don't always have the best judgment. The last time I was asked to bring a play over from France [as an investor], I said it didn't stand a chance in North America. That play was La Cage aux folles."

In Enigma Variations, Sutherland plays Abel Znorko, a mysterious Nobel Prize-winning novelist who has become a hermit on a small Norwegian island. Znorko grants a rare interview to a local journalist named Erik Larsen (played by John Rubinstein). This meeting sparks a flurry of surprising coincidences. Sutherland is loath to talk about the character of Znorko or any other character he might be playing. "The creation of the character happens within you," he explains. "You and the director pull the character out of you. If you discuss it with a stranger, you end up by defining it, two-dimensionalizing it. As soon as you two-dimensionalize it, you kill it. I used to talk about a character to people, and then I wondered where it had gone."

Sutherland's son wasn't originally the translator of Enigma Variations. Preparing a Los Angeles production in 1998, the cast began work on an earlier English version, but found that it strayed too far from the original French text. Then, Sutherland learned that Roeg, a Princeton graduate, had translated the play as part of his curriculum. Sutherland preferred his son's piece, which was a more literal translation, and Roeg flew to France to work with the playwright and polish off his version. Enigma Variations opened last May in Los Angeles' Mark Taper Forum and played to sold-out houses. Roeg was later nominated for best translation by the L.A. drama critics association.

Roeg is now a film editor and aspiring screenwriter and director. Kiefer, 33, is a Hollywood star. "They're good, so I'm very happy for them," Sutherland says of his sons who have followed him into the film business. "It's a difficult life, but it's also a very rewarding and wonderful one. I've been very happy, so I'm happy for them in that respect." Sutherland recalls that when he started out, "I never thought I'd make a movie. I was working in theatre and I thought I'd have a simple life." Born in 1935 in Saint John, N.B., and raised in Bridgewater, N.S., the son of salesman Frederick Sutherland and his mathematics teacher wife, Dorothy, first dreamed of becoming a sculptor. During his teenage years, Donald's goal shifted to actor. His father convinced him to "get something to fall back on," so Sutherland enrolled in the University of Toronto's engineering program in the early-1950s. He switched majors in his third year, to English, largely because of his involvement in student productions at the university's Hart House. After graduating in 1958 and working in regional Ontario theatre, Sutherland travelled to England to study at the London Academy of Music and Dramatic Art. A year later, he appeared onstage in London and in Perth, Scotland, and did some TV work. While shooting the television special Hamlet at Elsinore in Denmark, Sutherland met fellow Canadian Christopher Plummer. When Sutherland landed a small role in the 1967 American war movie The Dirty Dozen, an agent suggested that he try his luck in Hollywood. Sutherland called Plummer, then appearing at Ontario's Stratford Festival, and said he needed to borrow money to travel to the United States; Plummer made sure that he had it the next day. Soon after, Sutherland got his big break when he was cast in Robert Altman's 1970 satire of the Vietnam War, MASH.

He played Benjamin Franklin (Hawkeye) Pierce, an insolent, anti-Establishment military surgeon working at a mobile army hospital during the Korean War. Sutherland exuded a nonchalant disregard for authority and a moral outrage that articulated the disillusionment of the anti-Vietnam War movement. At 35, he became an instant celebrity, though it took him a while to realize that he had been transformed into a star. Sutherland was in Yugoslavia filming Kelly's Heroes with Clint Eastwood when MASH opened in the United States. Then, he came down with spinal meningitis. "I had gone into a coma and had a near-death experience," he says. "As I lay in the hospital bed, I could hear the producers had prepared a telegram to send to my wife telling her that they were sending my body back to America. I recovered, but my mind was fried. I didn't remember much.

"I caught a plane from London to New York and Elliott Gould [his MASH co-star] picked me up at the airport. He drove me to the Plaza Hotel. I couldn't believe it, I'd never even been inside such a hotel. A woman on the street yelled 'Donald' and ran up and kissed me. I was surprised because I couldn't recognize her. I mean, I expected her to be someone I'd grown up with in Nova Scotia. It never dawned on me that strangers would know who I was."

Here in Canada, and in most of the rest of the world, Sutherland cannot walk down the street without being recognized. In his 36-year career, he has appeared in more than 100 movies and left a unique impression on the cinema. He has worked with some of the greatest directors, among them Italians Federico Fellini (with whom he made Casanova) and Bernardo Bertolucci (1900). Besides MASH, he had lead roles in such American classics as Klute (1971) and Ordinary People (1980). Sutherland says no director stands out as a favourite. "When I was doing each film, I felt I had a bond with the director that was unbreakable," he says. "It comes very close to being in love."

The actor, who recently finished filming Space Cowboys, a forthcoming feature directed by his friend Clint Eastwood, says that acting is still an exciting challenge for him. "The harder you work, the harder you're going to have to work. You never get to the truth, but that's what your job is, to find it. The closer you get, the harder you have to dig to find it." Donald Sutherland is now continuing that artistic excavation on a stage in Toronto.