Saskatchewan is divided by two of Canada’s seven physiographic regions. These two regions are the Interior Plains and the Canadian Shield. The Canadian Shield is characterized by rugged rock exposures and many lakes. It also includes a sandy region south of Lake Athabasca. South of the Canadian Shield is the area commonly called the “grain belt.” It is characterized by level or gently rolling plains and fertile soils. Saskatchewan is known as one of the world’s great wheat producers. On the western boundary and across the southwest corner is another plains region of generally higher altitudes. Its rolling and hilly terrain is distinct from that of the grain belt. The extreme southwest the province shares the Cypress Hills with Alberta. The Cypress Hills are the highest point of land in Canada between the Rocky Mountains and Labrador.

Large areas of Saskatchewan once formed the bottom of a sea that disappeared millions of years ago. In geological terms much of the modern landscape is relatively young, having been shaped during the Quaternary period (within the last 2.58 million years). The oldest formations are from the Precambrian era (about 4.6 billion years to 5.41 million years ago). These formations predated the sea, and there is evidence of impressive mountain ranges that eroded over time into the plains of today. Erosion, molten uprisings, the ebb and flow of the sea all contributed, in different geological eras, to the development of various geological formations. These formations are now part of the grain belt, gas and oil fields, and deposits of salt, clays, coals, potash and other valuable minerals.

The main geological influence of the Quaternary period in Saskatchewan was glaciation. Glaciation polished and scarred substantial areas of exposed rock, and left rich sediments elsewhere. The glaciers moved southwest across the land, leaving behind lakes. At their largest these lakes covered most of the province. They marked the landscape with drumlins, eskers and moraines. At one time or another the glaciers touched all of Saskatchewan except for two small pockets of high land in the extreme south. These areas still have flora and fauna showing significant variations from their counterparts in the rest of the province. The last glaciers melted in the south approximately 16,000 to 18,000 years ago, and further north as recently as 8,000 years ago. 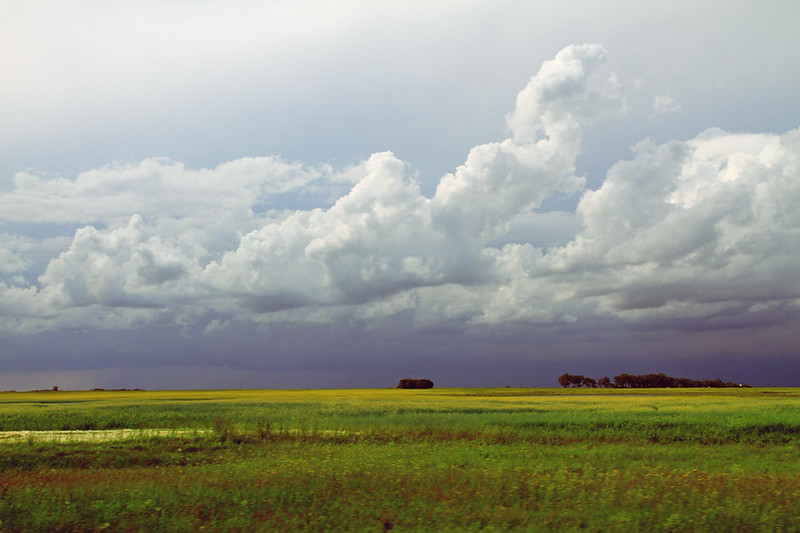 The northern third of the province is marked by swamp and muskeg, lichened rock and forest characteristic of the Canadian Shield. This area is generally inhospitable to agriculture because of the climate and thin soil. The altitudes of the grain belt drop markedly from west to east. Similarly, from south to north, levels of 600 and 900 m above sea level (common in the southwest) slope to 150 and 300 m in the northeast. These drops in altitude cause the province’s extensive river systems to flow to Hudson Bay. The soils permit agricultural settlement in what is roughly the southern half of the province. The cultivated areas of the southern portion depend on a variety of soils, predominantly brown and black. The texture of these soils ranges from loamy sands to clays.

Saskatchewan’s natural vegetation is divided from north to south into six fairly distinct zones. All of these zones cross the province on a southeast diagonal. A band of subarctic forest tundra exists along the northern boundary. South of this band is a broad region of northern coniferous forest. A third band of mixed woods is below that. The northern agricultural belt is aspen parkland, the central is mid-grass prairie and the southernmost is short-grass prairie. Each of the six zones corresponds roughly to particular soil deposits. Soil erosion is a continuing problem in the province. The broad river systems provide one type of erosion, and the winds, so well-known that they are a familiar element in prairie literature, create another. 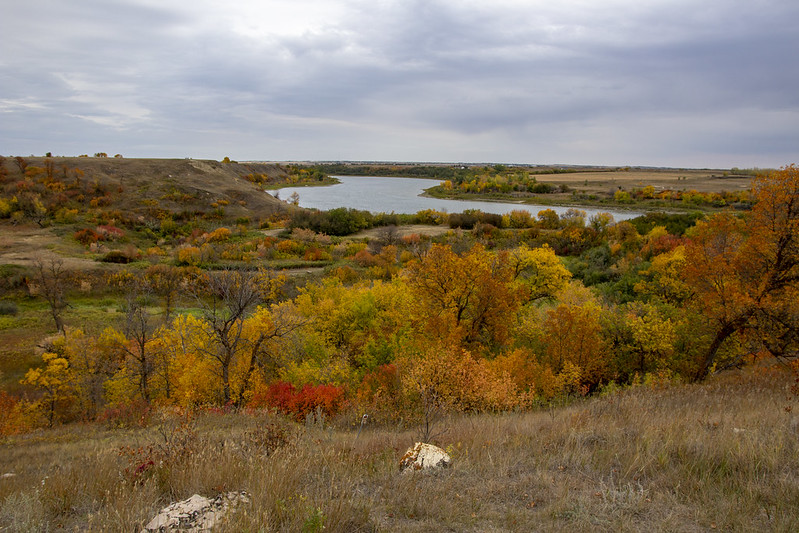 Four major basins drain the province: the Mackenzie and Churchill in the north and the Saskatchewan and Qu'Appelle-Assiniboine in the south.

A superficial view of maps of Saskatchewan suggests that the province has an abundance of water. This water lies both on the surface and in aquifers (underground layers of water-bearing rock). The aquifers occur at varying depths. The larger aquifers are estimated to be capable of yielding about 10 per cent of the annual flow of the South Saskatchewan River. However, aquifers can be tapped only through technology that may be expensive. Moreover, individual wells are generally not large producers. Much of the most accessible surface water is in the north, where agricultural settlement is minimal.

Both agriculture and industrial development (particularly the production of potash) require large amounts of water. Saskatchewan is heavily dependent on river flows and precipitation. The river systems in the agricultural sector use water that comes mainly from snow melt in the Rocky Mountains, and snowfall there is subject to wide variations. Precipitation within the province is similarly unreliable. What precipitation does arrive is often subject to high rates of evaporation. A characteristic feature of Saskatchewan’s farming landscape is the dugout, a large excavation designed to catch the spring runoff from the fields.

In the arable sections of the province the last spring frost usually comes in early June. The first autumn frost usually comes in early September. This relatively short growing season affects what agriculture can be produced in Saskatchewan. For example, grains are sensitive to frost from germination until harvest. In another sense the number of frost-free days is a misleading indicator of the growing season, as the province’s northern location also produces early sunrises and late sunsets in the summertime. In the grain belt, for example, on 21 June the sun rises before 5 a.m. and sets after 9:30 p.m. For the same reason winter days are short. On 21 December sunrise is after 9 a.m. and sunset at 5 p.m.

Blizzards in winter and thunderstorms in summer are common. The southern half of the province occasionally experiences tornadoes.

Soil and water are the fundamental resources of any agricultural region. However, Saskatchewan also contains valuable deposits of minerals such as potash and uranium, as well as fossil fuels.

The province’s forest resources are limited by soil and climate. Even so, nearly three-quarters of the province is wooded, and nearly one-half of the stands yield a harvest. In dry years losses from fire are high, not only in the immediate destruction of potential pulp and lumber, but in the loss of habitat for wildlife. Wildlife supports recreational and commercial fishing, trapping and hunting. In addition, these activities are an important part of the way of life of Indigenous peoples. The commercial freshwater fisheries, although valuable locally where they exist, are among the smallest in Canada. 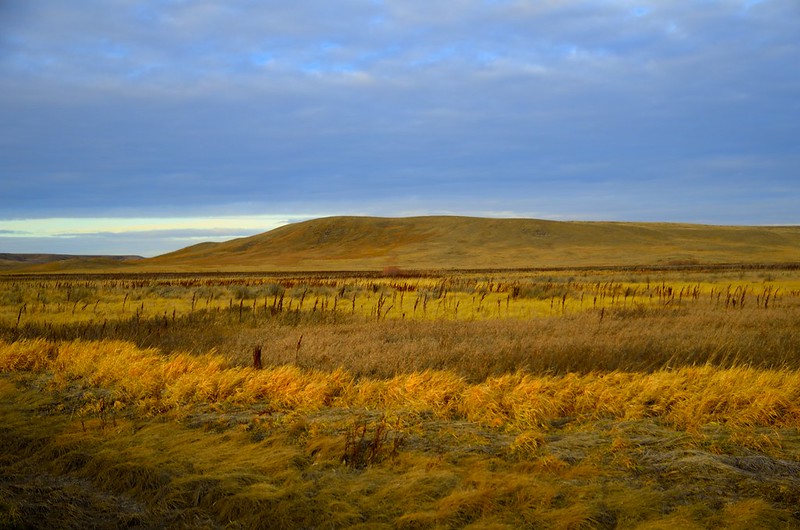 Saskatchewan is the chief beneficiary of a major federal statute, the 1935 Prairie Farm Rehabilitation Act. The act, with amendments, has facilitated the transformation of the agricultural landscape through the creation of dams and dugouts. Federal policy centred on water conservation is supplemented by related provincial policies.

The province is also home to 39 provincial parks and two national parks, all of which help preserve wildlife and ecosystems. Grasslands National Park, for example, is the only place in Canada the black-tailed prairie dog roams in its natural habitat, while Prince Albert National Park protects a section of the boreal forest as well as a white pelican nesting colony.