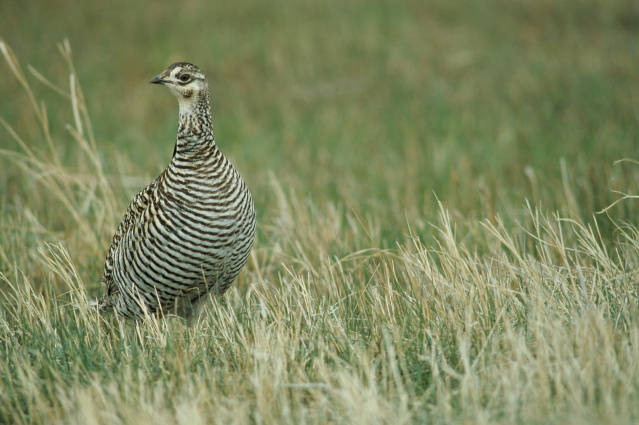 Adult greater prairie chickens are between 41 and 47 cm long and weigh between 770 (female) and 990 (male) grams. Both males and females are brown with white, horizontal bars from head to tail. Males have solid brown feathers on their crown and at the end of their tail, females do not. Males also have orange combs above their eyes and orange air sacs on either side of their neck. 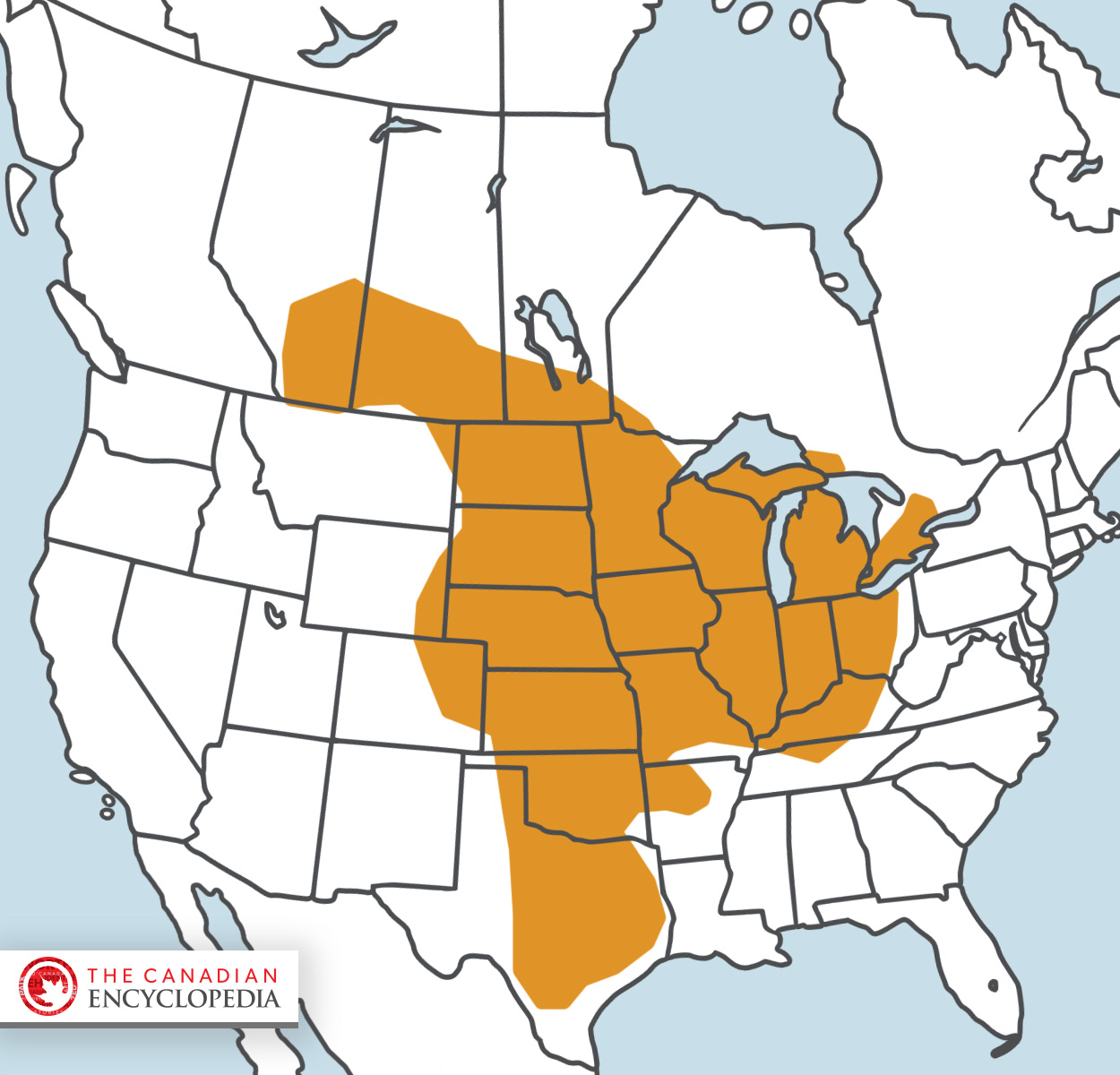 The historic range of the greater prairie chicken in Canada included the southeastern corner of Alberta, as far west as Calgary and as far north as Lac La Biche, through most of Southern Saskatchewan, as far north as Prince Albert National Park, and in Southern Manitoba, as far north as Grand Rapids. In Ontario, the greater prairie chicken lived in the southern tip of the province east to the Holland Marsh area of southern Lake Simcoe. They also lived around Lake of the Woods in Northwestern Ontario, and briefly in the Sault Ste. Marie area and on Manitoulin Island.

Male greater prairie chickens mate with multiple females while females mate with just one male. This system is called polygyny. While polygyny is typical of most animals, it is rare in birds. Most birds are monogamous, meaning one male and one female form a stable relationship.

During breeding season, male greater prairie chickens gather on leks and attempt to attract females. Leks are areas where males can put themselves on display, usually on small, exposed hills or mounds. Leks may also be called “booming grounds,” a reference to the low, three-syllable moan male greater prairie chickens make during their mating dance. They also cackle and cluck, stamp their feet, inflate and deflate their air sacs, and raise and lower the feathers on the back of their neck.


Female greater prairie chickens create shallow, bowl-shaped nests in the ground, lining them with feathers, leaves, grass and twigs. Nests are built between mid-April and early-June, under the thick cover of grasses and other vegetation. Hens lay one set of 11 to 12 eggs per season. Chicks are able to feed themselves soon after hatching, and leave the nest with their mother not long after they’re born. Chicks and hen stay together until the chicks are almost 3 months old (80–84 days). Greater prairie chickens live for about 1.6 years.

Greater prairie chickens eat different food depending on the time of year. In spring and summer they primarily eat green leaves, buds and grass, as well as insects. They continue to eat leaves and grass through the fall. In the winter, the greater prairie chicken’s favourite food are sunflowers. In the colder months they also rely heavily on seeds and cereal grains such wheat and corn.


The Siksika (Blackfoot) and Plains Cree have a sacred powwow dance inspired by the greater prairie chicken. According to legend, a young Siksika hunter came across the birds while he was looking for food. He shot and killed one of the chickens using his bow and arrow, and brought the bird back to his family to eat. That night, the man had a dream. In the dream, the spirit of the bird came to him and asked, “Why did you kill me?” The man replied, “Because I was hungry and needed to feed my family.” In exchange for taking his life, the spirit showed the man a dance, and asked that he teach it to his people. If the man didn’t do as he was asked, the spirit would kill him.

The dance mimics the movements of the male prairie chicken’s mating dance. It continues to be performed by Siksika and Cree men today.

Greater prairie chickens are extirpated from Canada. Extirpation is different from extinction. It means that the species no longer exists in a specific geographic location but continues to live elsewhere. The Committee On the Status of Endangered Wildlife in Canada (COSEWIC) listed the greater prairie chicken as extirpated in 1990, and in 2003, the species received the same designation under the Species at Risk Act (SARA).

The start of the greater prairie chicken’s disappearance dates to the 1800s and early 1900s. At this time, much of the species’ grassland habitat was converted to farmland for cattle grazing and grain crops. Today, approximately 1 per cent of Canada’s original tall-grass prairie is left.

The conversion of grassland into farmland meant not only a loss of habitat for the greater prairie chicken, but also a decline in their genetic variation. As sections of grassland became more and more fragmented, populations of the species became more and more isolated. When a population is isolated they’re more likely to breed with one another. Inbreeding results in limited genetic difference between members of a population, which in turn leads to weaker individuals.