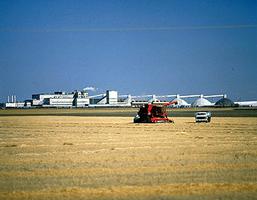 Potash mine at Belle Plaine, Saskatchewan (photo by Bill Brooks). 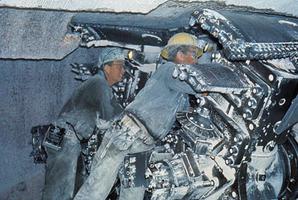 Workers at a potash mine in Saskatchewan (courtesy Masterfile).
PreviousNext

Potash is an alkaline potassium compound most commonly used in fertilizers. It refers to a variety of salts produced through mining of minerals and chemical manufacturing. Canada is the world's largest potash producer and exporter. The bulk of the country’s potash industry is located in Saskatchewan.

The term "potash" comes from the pioneer practice of extracting potassium carbonate (K2CO3) by leaching wood ashes and evaporating the solution in large iron pots. Today, potash refers to potassium compounds and potassium-bearing materials, the most common being potassium chloride (KCl) — a salt-like mineral that is naturally colourless or white, but derives a pink or red colour from various impurities, such as clay. Potassium is the seventh most abundant element in the earth's crust, and is a major plant and crop nutrient, along with nitrogen and phosphate. About 95 per cent of world potash consumption is used in fertilizers, with small amounts used in manufacturing soaps, glass, ceramics, chemical dyes, drugs, synthetic rubber, de-icing agents, water softeners and explosives. Potash is generally mined via one of two methods, conventional underground mining or solution mining. Because conventional underground mining can only be carried out to a depth of 1,200 m, solution mining is used in deeper mines. The solution mining process involves drilling holes into the potash-bearing rock, then filling the openings with a solution mostly containing salt. Once the solution is saturated with potash, it is pumped back out of the hole.

As early as 1767, potash from wood ashes was exported from Canada, and exports of potash and pearl ash (potash and lime) reached 43,958 barrels in 1865. There were 519 asheries (i.e., factories producing potash) in operation in 1871. The industry declined in the late 19th century when large-scale production of potash from mineral salts was established in Germany. In 1943, potash was discovered in Saskatchewan in the process of drilling for oil. Active exploration began in 1951. In 1958, the Potash Company of America became the first potash producer in Canada with the commissioning of an underground potash mine at Patience Lake; however, due to water seepage in its shaft, production stopped late in 1959 and, following extensive grouting and repairs, resumed in 1965. The underground mine was flooded in 1987 and was reactivated for commercial production as a solution mine in 1989.

In 1964, Kalium Chemicals Ltd. opened the world's first potash solution mine near Regina, at a depth of 1,585 m. Between 1960 and 1985, potash mine development was carried out mostly in Saskatchewan, with mines opening in New Brunswick in the 1980s. An important series of expansions during the 1970s and 1980s and successive incremental developments in the 1990s brought Canada to the forefront of potash-producing nations.

Today, as the largest producer and exporter of the mineral, Canada exports about 95 per cent of its potash to over 50 countries. The primary buyers are the United States, Brazil, Indonesia, China and India.

The Canadian potash industry consists of 11 mines, 10 of which are in Saskatchewan and one in New Brunswick. Of these mines, nine are underground operations and two are solution mines.

Western Canada's potash deposits occur in the Prairie Evaporite Deposit — the largest known potash deposits in the world. The deposits extend from central to south-central Saskatchewan, a few kilometres into Manitoba, and 200-300 km into northern North Dakota.

In New Brunswick, significant reserves occur in the Windsor Group rock formations, and PotashCorp operates a mine near Sussex.

Because potassium (the main component in potash) is one of the three primary nutrients needed for plant growth, potash-based fertilizers are a major contributor to agricultural output worldwide. As the world’s population continues to grow, so too will the demand for food, and subsequently fertilizers such as potash.

The environmental impact of potash mining is generally localized to the mine site, and may include the disruption of vegetation and wildlife, as well as large-volume water consumption and contamination.