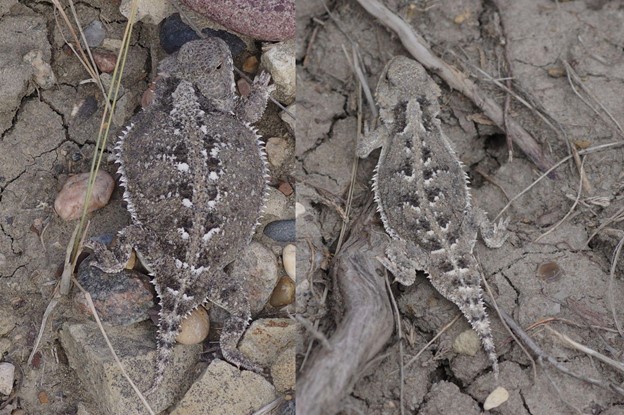 Greater short-horned lizards are medium to small lizards with wide heads, a distinctly flattened shape, short legs and short tails. Their backs are covered in ridged scales of different sizes, giving them a rough or spiny texture. There is also a single row of scales that form a fringe along either side of their abdomens. The genus is typified by the obvious “horns” on the lizards’ heads. Outgrowths of the skull, these horns are covered with enlarged, pointed scales. The horns are quite different between species of horned lizards. For example, greater short-horned lizards can be distinguished from most other species by their reduced horns. This gives the greater short-horned lizard’s head a wide, boxy shape rather than the spiny shape that typifies many other species.

Male and female greater short-horned lizards look different (a phenomenon known as “sexual dimorphism”). Sexes vary in overall body length. Adult females reach roughly 7 cm while males remain smaller, typically around 5 cm. Females are also wider and more robust with adult, non-pregnant females weighing nearly 20 g, twice as much as males. Along with size and shape, adult male and female greater short-horned lizards can be differentiated by the male’s bulge at the base of the tail and the orange, waxy pores along the upper legs. Males of all ages have enlarged post-anal scales.

Both sexes are cryptic, meaning that they camouflage to match ground colour. This means greater short-horned lizards are usually some variation of brown, gray or reddish, with flecks of lighter and darker colours. Neonates (newborns) usually have limited dorsal patterning while juveniles and adults often have paired, darker blotches running down their backs. A greater short-horned lizard’s belly is light coloured and often has dark speckling, particularly in the flanks and throat.

The greater short-horned lizard has the largest range of any horned lizard. It occupies a swath of central North America, from central Mexico through the west-central US and into Southern Canada. In this distribution, it lives in a wide range of habitats from deserts, grasslands, badlands as well as upland forests and meadows. In Canada, it is restricted to a few regions in southwestern Saskatchewan and southeastern Alberta. Greater short-horned lizard populations in Alberta are isolated, with little chance of connectivity between them. By comparison, the vast majority of Saskatchewan's population seem to be based in Grasslands National Park’s West Block. In these areas, greater short-horned lizards are typically associated with major river valleys and dry, open habitats. They also use badlands, coulees and eroded slopes. Greater short-horned lizards like areas with a lot of bare soil as well as areas with complex structures like a diversity of plant types and rocks. They like loose soils so that they can dig to avoid inclement weather and for overwintering. Overwintering sites in Canada can be quite shallow. They usually occur in areas that are somewhat south facing and tend to retain snow. 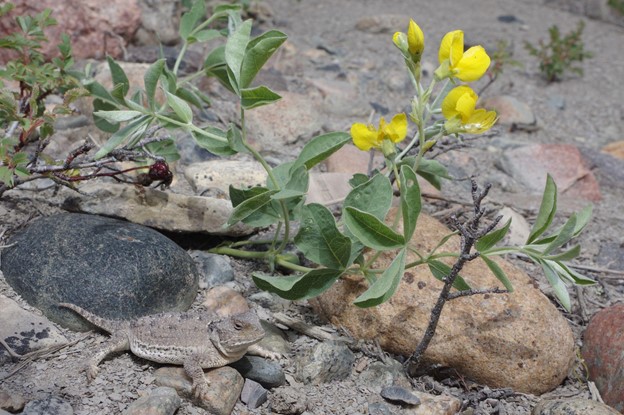 Sexual size dimorphism in greater short-horned lizards is primarily explained by the age at which each sex reaches sexual maturity. Both sexes grow at the same rate, but males mature following their first winter and, from that point forward, their growth slows. Females, on the other hand, do not mature until after their second winter. Courtship and breeding takes place in mid to late May. This involves the smaller male following the female around her home range, climbing onto her back, then attempting to flip her over. Gestation is rapid and females may nearly double their non-pregnant mass. Female greater short-horned lizard give birth to a litter of live young between late July and early August. The litters in Canada are smaller than in more southern populations. For example, females in Alberta produce 6 to 13 neonates in a litter compared to an average litter of 16.7 in Arizona. After giving birth, females eat as much as possible to recover body condition before overwintering.

Globally, the greater short-horned lizard is considered secure and widespread. However, in Canada, it has a status of “endangered” under schedule 1 of the Species At Risk Act (SARA) and a status of “Special Concern” with the Committee on the Status of Endangered Wildlife in Canada (COSEWIC). This reflects a wide variety of threats that may cause population declines. Direct habitat modification such as land conversion, oil and gas drilling and associated infrastructure, along with human recreational activities, may affect some populations. Other populations are affected by invasive species and subsidized predators. A subsidized predator is an animal able to maintain unnaturally high population levels due to human activity. In the case of greater short-horned lizards, such predators include ravens that feed on garbage generated by humans. Other threats, such as shifts in precipitation associated with climate change, may be affecting larger swaths of the Canadian populations of greater short-horned lizards, including those in protected areas.