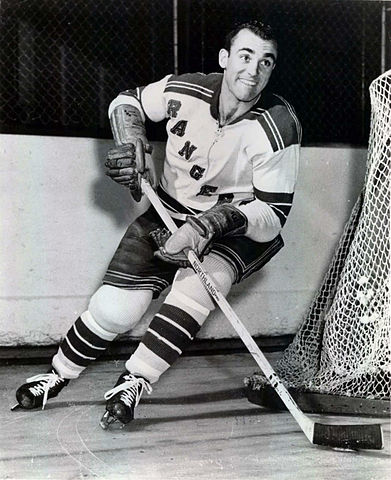 Harry Howell with the New York Rangers, circa 1952.

Born to John Vernon (Vern) and Dorothy Howell, Harry was the eldest of three children, part of the family that owned Howell Brothers Furs. Growing up in Hamilton, Ontario, Howell played a lot of street and playground hockey because few arenas existed in the city at the time.

He entered organized hockey at the age of 12, playing in the Hamilton Police Minor League. One of his first teams was sponsored by Hicks Furs, which caused a bit of a stir within his family because the company was a rival of Howell Brothers Furs. He later played for the Thompson Motors team that won the league and city championship.

It was clear early on that his skills set him apart from his peers. At the age of 16, he was scouted by the New York Rangers and signed a contract as a free agent in 1949.

Harry Howell played junior hockey in the Ontario Hockey Association (OHA) for the New York Rangers’ affiliate, the Guelph Biltmore Mad Hatters. He debuted for  Guelph’s B-level club but the following season was already playing Junior A. In his third full season with the Mad Hatters, Howell amassed 37 points in 51 games as Guelph cruised to the OHA championship. Guelph went on to face the Regina Pats in the  Memorial Cup, the national junior hockey championship. The Mad Hatters dominated the Pats, outscoring them 30–8 en route to their first and only Memorial Cup win.

After winning the Memorial Cup, Harry Howell made the jump to the National Hockey League, debuting with the New York Rangers on 18 October 1952 at Maple Leaf Gardens. He scored his first NHL goal on his first shot in that game, against Toronto Maple Leafs goalie Harry Lumley.   In just his fourth season with the team (1955–56), Howell was named team captain, making him the youngest captain, at age 22, in Rangers history. He maintained the title until 1957, voluntarily relinquishing it to Red Sullivan so that he could focus on his game.

Howell was an indisputable stalwart on New York’s blue line and was regarded as one of the league’s premier defencemen. His teammates affectionately referred to him as “Harry the Horse.” In his first 17 seasons with the team, he only missed 20 regular-season games. 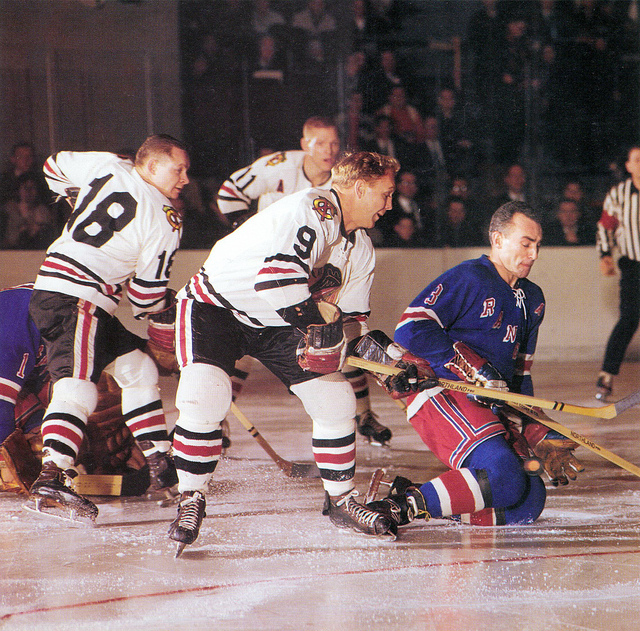 Harry Howell (right) blocks a shot in front of Bobby Hull (centre) during a game between the New York Rangers and Chicago Blackhawks.

On 21 January 1967, Harry Howell became the first Ranger ever to play 1,000 regular-season games. To commemorate his service to the franchise, the Rangers hosted a “Harry Howell Night” on 25 January 1967 at Madison Square Garden. It was the first time the Rangers had ever honoured a player in this way. Howell later recalled that “two planeloads” of friends and family flew in from Hamilton to mark the occasion. Before the ceremony, Howell also received a medallion from the City of New York, presented by mayor John Lindsay.

At the end of the 1966–67 season, at age 34, Harry Howell won the James Norris Memorial Trophy, which is awarded annually to the NHL’s best defenceman. Howell’s timing could not have been better, something he acknowledged at the NHL’s award luncheon: “I’m glad I won it this year, because I think some other guy is going to win it for the next decade.” (Bobby Orr finished second in the voting; the following season, he won his first of eight consecutive Norris trophies.)

Following his Norris-winning season, Howell struggled with a back injury, which limited his effectiveness. Ongoing issues finally led to spinal-fusion surgery in April 1969. Sensing that Howell’s best days as a player were behind him, the Rangers wanted to offer him a management position. But Howell refused because he wanted to continue playing, so the Rangers traded him to the Oakland Seals for cash.

Harry Howell played an incredible 1,160 games with the Rangers, a franchise record that is unlikely to be broken. During his time with the Rangers, he played in an impressive six all-star games and was selected for the 1967 first all-star team.

In his first season with the Oakland Seals (1969–70), Harry Howell also played in his seventh all-star game. The following year he played part of the season with the rebranded California Golden Seals before being traded to the Los Angeles Kings, where he rounded out his National Hockey League career (1970–73).

In 1,411 regular season games in the NHL, Howell scored 94 goals and made 324 assists. He is ranked 11th all-time in the NHL for the number of games played by a defenceman.

After the 1972–73 season, the Los Angeles Kings wanted Harry Howell to coach their Western Hockey League affiliate in Portland, Oregon, but he still felt he could contribute on the ice. He looked to the newly established World Hockey Association (WHA) as a way to continue his playing career.

In 1973 he began playing with the New York Golden Blades; the team was relocated to Cherry Hill, New Jersey, in November 1973 and rebranded as the Jersey Knights. It was subsequently bought by California businessman Joseph Schwartz and relocated and rebranded the San Diego Mariners in April 1974.

In the team’s first season in San Diego, Howell served as a player-coach and led the Mariners to the playoffs. They defeated the Toronto Toros in the first round before falling to the Houston Aeros in the semifinal. A shoulder injury limited Howell’s on-ice performance in the post-season and led him to retire in September 1975.

He was briefly lured out of retirement by the Calgary Cowboys of the WHA in January 1976, signing as a free agent at the age of 43. He played 31 games with the Cowboys before he hung up his skates for good.

Following the end of his playing career, Harry Howell became assistant general manager of the Cleveland Barons (formerly the California Golden Seals) on 10 September 1976. The following season, the team’s general manager, Bill McCreary, was fired and Howell took the reins.

In the off-season, Howell coached Team Canada at the 1978 world championship in Prague, Czechoslovakia. His team finished with the bronze medal, behind the Soviet Union and the tournament’s host country.

In June 1978, the Cleveland Barons merged with the Minnesota North Stars. Howell was appointed coach of the revamped North Stars franchise on 5 July. His coaching stint was brief, lasting only 11 games in the 1978–79 season. Howell was dissatisfied with his coaching performance and felt that he lacked the experience for the position. He resigned to become the team’s chief scout.

Howell later took a professional-scouting position with the Edmonton Oilers in 1987 and was a part of the 1990 Stanley Cup-winning team. In 2000, Howell followed general manager Glen Sather from the Oilers to the New York Rangers, where he took up a pro-scouting position until the 2004–05 player lockout. He officially retired from the world of hockey at the age of 71.

Harry Howell was inducted into the Hockey Hall of Fame in 1979 along with Bobby Orr and  Henri Richard.

On 22 February 2009, the New York Rangers retired Howell’s No. 3 jersey in a ceremony that also honoured Andy Bathgate. Howell is one of only eight players to have had their sweater raised to the rafters in Madison Square Garden.

Howell also received honours in his hometown of Hamilton, Ontario, in 2010, when he was inducted into the Hamilton Sports Hall of Fame and again, in 2014, when the North Wentworth Twin Pad Arena was renamed the Harry Howell Arena.