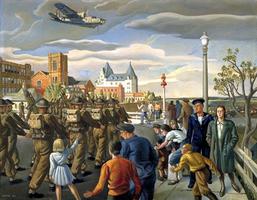 Henry George Glyde, painter, art educator (b at Luton, Eng 18 June 1906; d at Victoria, BC 31 Mar 1998). Glyde was trained at the Royal College of Art, London (1926-30). He came to Canada in 1935 to teach drawing in Calgary at the Provincial Institute of Technology and Art and in 1936 became head of the art department. He was also head of the painting division of the Banff School of Fine Arts (1936-66). In 1937 he began teaching community art classes with the Dept of Extension, U of A, where he went on to establish the Division of Fine Art. He taught there between 1946 and 1966.

Glyde's most significant works are oils and murals that documented aspects of urban and rural prairie life in a style that could be called social realism. His murals are classical with sombre colours sombre and figure groupings that are mythological and symbolic in mood and content. The emphasis on structural realities carried over to his interpretation of the Alberta landscape and to his portrayal of the BC coast. A major retrospective exhibition was produced by the Glenbow Museum in 1987.