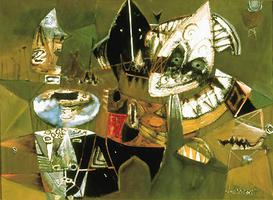 Jack Leonard Shadbolt, artist, teacher, author, poet (b at Shoeburyness, Eng 4 Feb 1909; d at Burnaby, BC 22 Nov 1998). Best known as a painter and draftsman, he wrote 3 books and many articles and through his teaching profoundly influenced art and artists in BC and across Canada. He moved to British Columbia in 1912.

Jack Shadbolt studied at the Art Students' League in New York City (1948) and in London (1937) and Paris (1938). After teaching art to children in BC between 1929 and 1937, he joined the Vancouver School of Art. He served in WWII 1942-45, including 1944-45 with the Canadian War Artist establishment, and then returned to the school, where he was head of painting and drawing until 1966. He was an influential teacher and adviser across Canada and the US, having conducted workshops (he was the first artist to do so at the Emma Lake Artists' Workshops in 1955) and juried exhibitions throughout North America. Some 70 solo exhibitions of Jack Shadbolt's work were mounted and his many major international exhibitions included the Venice Biennale XXVIII and 4 major retrospective exhibitions at the Vancouver Art Gallery, the BC Museum of Anthropology, the National Gallery of Canada and the Glenbow Museum.

An extraordinarily prolific artist, Jack Shadbolt worked in large series (or suites) which derived from his personal experiences of nature and Native art in BC, his many travels in Europe and his recognition of calligraphy and op-art; in paint slashes and in incisive lines, in butterflies and totem poles, in insect life and ritual brides, in poetry and architecture. Everything was transformed by his emotions as much as by his intellect. As well as painting many murals (Edmonton International Airport, the National Arts Centre and the former CBC building), he did stage, ballet and costume designs and theatre posters. Jack Shadbolt also authored In Search of Form (1968), Mind's I (1973) and Act of Art (1981). Until his death, he continued to have an enormous output, eg, a 3-dimensional plywood relief created for the MacMillan Bloedel building in Vancouver (1987).