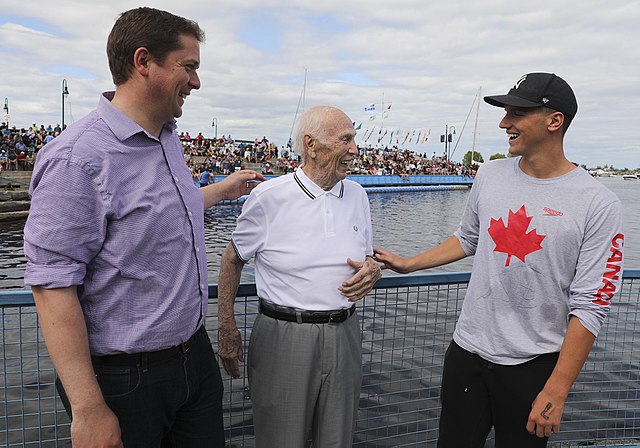 As a boy, Jacques Amyot competed in cycling before switching to marathon swimming at age 14. He placed second in his first competition, a 3 km race across Lac Saint-Joseph, northwest of Quebec City, in 1939.

Amyot competed in Canada’s Olympic trials in the men’s 1500 freestyle in 1948.  That same year, he began his career as a professional swimmer. In the eight years that followed, this expert in the crawl carried off the classique de nage de Québec at Lac Saint-Joseph and was a five-time Quebec championship winner of the 8 km event. In 1954, at the age of 29, Jacques Amyot swam the 33 km separating Sainte-Anne-de-Beaupré and Québec City. He also distinguished himself in various skiing disciplines (cross-country, downhill, and ski jumping) during the 1940s and 1950s.

Jacques Amyot entered Québec sports history on 23 July 1955 by becoming the first person to swim across Lac Saint-Jean. Despite strong winds and some rain, he covered the 26 km distance between Veauvert beach at the mouth of the Péribonka River and the city of Roberval in 11 hours and 48 minutes. Several months after this achievement, he again plunged into the St. Lawrence River and succeeded in swimming around Île d'Orléans, a distance of approximately 80 km.

On 17 July 1956, he set a world record by becoming the first male Canadian to cross the English Channel. (Winnie Roach-Leuszler had become the first Canadian in 1951.) Leaving from Cap Gris-Nez in France, he had to swim in frigid waters and battle strong currents before reaching the shore of England some 13 hours later. He undertook the journey again at age 50 on 29 August 1975, shaving 30 minutes off his previous time and setting a world record for completing two Channel crossings separated by the greatest gap of time (19 years). Between these European achievements, Amyot also swam from Neuville to Quebec City several times. He returned to Lac Saint-Jean again in 1959, 1962 and for his 20th crossing in 1974.

During his career, Jacques Amyot won eight national swim titles. He held 47 Quebec records and 16 Canadian records in open water swimming.  In July 1989, the Traversée internationale du lac Saint-Jean (an important swimming marathon) acknowledged Amyot’s contribution by unveiling a monument in his likeness on the municipal dock in Roberval.

Amyot was inducted into the Quebec Sports Hall of Fame in 1993. In 1995, the International Marathon Swimming Hall of Fame in Fort Lauderdale, Florida, named him an Honouree in open water swimming. In 1998, he was named to the Temple de la renommée de la natation québécoise (Québec Swimming Hall of Fame) in the athlete category as “Maitre de Québec,” and in 2001 he was made a Chevalier in the Ordre national du Québec. In 2016, The Quebec Athlete Gala created a lifetime achievement award named after Amyot and made him the inaugural recipient.