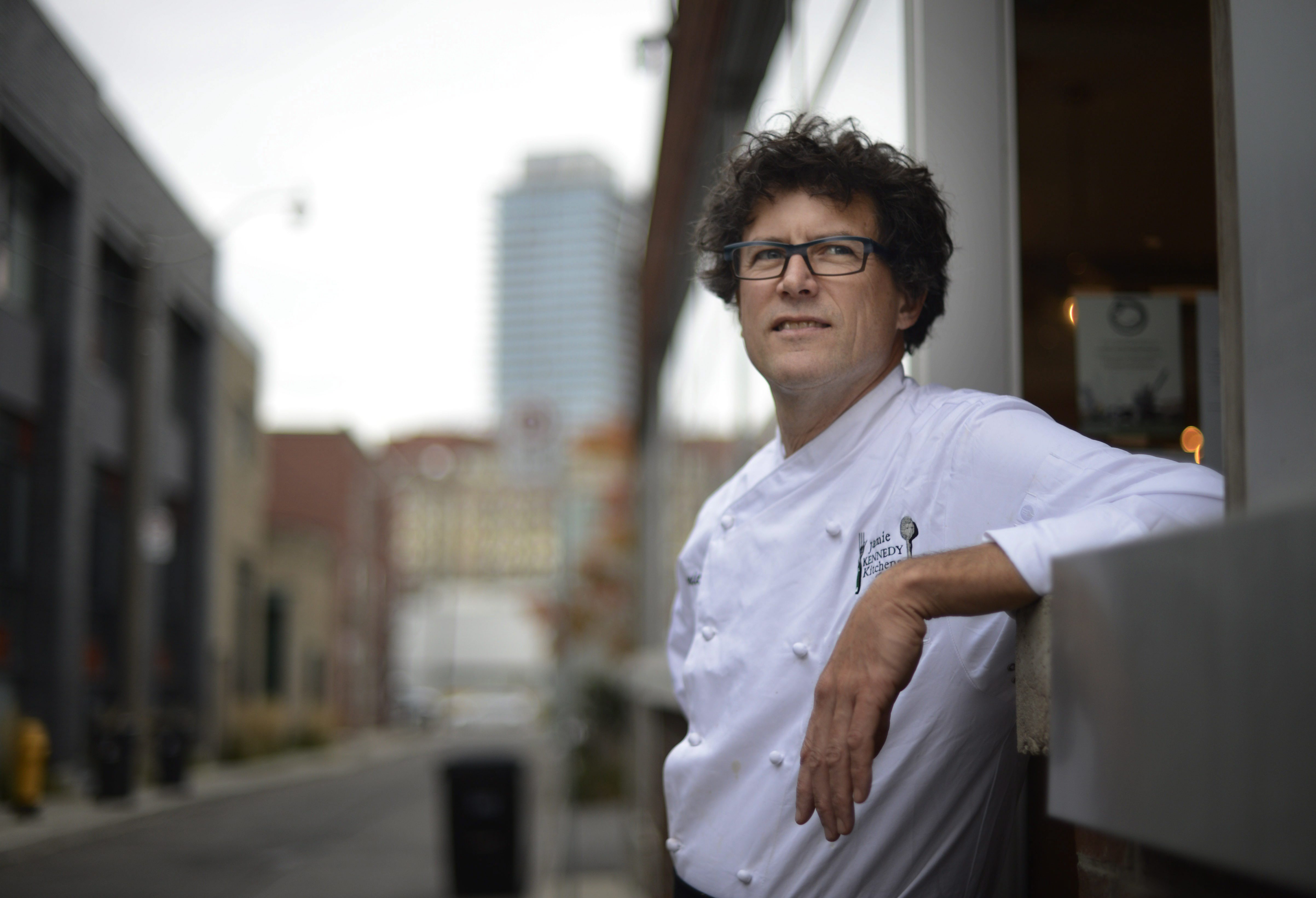 Raised in Don Mills, ON, Kennedy was drawn to the “theatricality of food,” from service in restaurants to watching such popular TV cooks as the Galloping Gourmet and Julia Child.

When he was 10 years old, Kennedy’s family moved to New Haven, Connecticut, where he started a culinary club at his high school. Kennedy took on a three-year apprenticeship program at Toronto’s George Brown College in 1977, where he trained in the kitchen of the Windsor Arms Hotel. Afterwards he went to Europe, picking up culinary traditions as a journeyman cook in Switzerland for two years, where he apprenticed alongside German-born chef and farmer Michael Stadtländer, who emigrated to Canada in 1980.

In 1980, Kennedy and Stadtländer were drawn back to Canada when they were hired as co-head chefs at a new upscale French restaurant, Scaramouche. The two chefs quickly put Scaramouche on the global culinary map, revolutionizing the idea of fine dining in Canada. With a keen eye for detail, the pair followed a practice of “nouvelle cuisine” they had learned in Europe: their iconoclastic approach to classical French cooking stripped dishes back to basics.

The chefs were unhappy with the way food was supplied in Ontario, from factory farms instead of small, local growers. On their days off they often visited Ontario’s farmlands, building relationships with small farmers.

Five years later, when Kennedy left Scaramouche to open his own restaurant, Palmerston, he started to build relationships with small farms to supply organic ingredients. In 1989, he and Stadtländer launched Knives and Forks, an alliance of chefs and local organic farmers to promote the idea of using sustainable, local and organic ingredients in Ontario’s top kitchens.

In 1994, Kennedy was poached to head up dining at the Royal Ontario Museum. Known as Jamie Kennedy at the ROM, the operation included a restaurant only open to the public for lunch, with the space reserved for private events in the evenings; it quickly became one of the hottest lunch tickets in Toronto. Looking for an additional event space, Kennedy opened JK Kitchens (his catering arm) at 9 Church Street in 2003, tacking a small wine bar on the side. Kennedy later said that his original intention, to run a hands-off catering arm so that he could spend more time developing his farm on Prince Edward County, was thwarted when JK Wine Bar’s small-plates and wines-by-the-glass menu garnered rave reviews.

The chef’s hyper-seasonal, local, organic fare gelled with Toronto diners, persuading Kennedy to expand his catering and restaurant business. In 2005, he opened the Jamie Kennedy restaurant to serve more elegant dinners (it closed in 2007). The following year, he launched Jamie Kennedy at the Gardiner, taking over the restaurant and catering in the modern museum dedicated to ceramics. In 2007, he opened the Gilead Café + Bistro in gentrifying Corktown, to house the catering operations.

Operating high-end restaurants amid the global financial crisis proved challenging, especially as Kennedy was trying to keep up with the frenetic pace of operating all of his restaurants while keeping one foot on his Prince Edward County farm (where the chef lived from July 2007 to November 2008). In part because of his commitment to the local food movement and the higher prices it incurs, by 2009, Kennedy’s enterprise was near bankruptcy.

That year, Kennedy scaled back his operations, selling his Wine Bar and shutting down the restaurant at the Gardiner Museum (he still supplies the museum’s café). Gilead Café went through several changes since its opening: today it serves as a café for brunch and lunch and a kitchen for JK Catering operations. In December 2013, Kennedy re-launched his Wine Bar concept here, (which he had already tried but shut down in 2010). The new menu is reasonably priced and serves Kennedy’s signature "locavore" fare — locally grown, often on his own Prince Edward County farm — paired with an exclusively Ontario wine list, including wine made in partnership with Rosehall Run Vineyards in Wellington, Ontario.

Kennedy himself heads up the cooking at Gilead, putting his dream of living on his Prince Edward County farm on hold, at least until he gets out of debt. Produce from the chef’s Pleasant Valley Farm makes up some of the ingredients used in his kitchens; the farm can also be rented as a private event venue.

Kennedy was one of the first chefs in Canada to actively support and speak out about the need to support sustainable agriculture and fishing practices. The face of the Slow Food and Local Food Movements in Ontario, he helped to bring both concepts into mainstream thinking. He has donated his time and name to organizations including the Endangered Fish Alliance, World Wildlife Foundation, Living Oceans Society and Seafood Watch.

First Recipient (alongside Michael Stadtländer) of Governor General's Award in Celebration of the Nation's Table, 2010