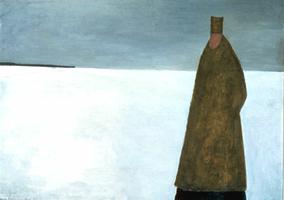 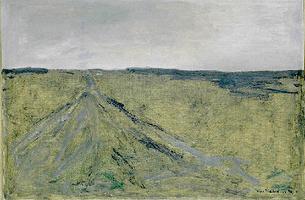 Jean Paul Lemieux, CC, GOQ, painter, illustrator, critic, teacher (born 18 November 1904 in Québec City, QC; died 7 November 1990 in Montréal, QC). A Companion of the Order of Canada, Lemieux is widely regarded as one of the most important Québec artists of the 20th century. His artistic universe is often classified as one of northern landscapes — flat, barren and infinite — but this preoccupation was only one characteristic of his multi-faceted body of work.

In 1914, when Jean Paul Lemieux was ten years old, during one of the summers his family spent at Kent House, a resort 12 km outside Québec City overlooking Montmorency Falls, he met an American artist creating large paintings for the restoration of one of the hotel’s lodges. That summer, Lemieux started making sketches, and painted his first watercolour.

After leaving Québec City for Berkeley, California, the Lemieux family returned to Québec in 1917, this time to Montréal. There, Lemieux attended the Collège Mont-Saint-Louis and then Loyola College. In 1926, he began taking lessons from the Canadian Impressionist Marc-Aurèle de Foy Suzor-Coté. The lessons took place in the home of the well-known sculptor Alfred Laliberté where Maurice Cullen, Robert Pilot, and Edwin Holgate also had studios.

In the fall of 1926, Lemieux enrolled in the École des beaux-arts de Montréal, where he became a student of Holgate. While studying at this school, which pursued a classical, anti-Modernist curriculum focused on traditional skills like drawing, figurative painting and sculpture, Lemieux met fellow artist Paul-Émile Borduas, who went on to become one of the authors of the manifesto Refus global and a pioneer of abstract painting in Canada. During that time he also developed close friendships with Francesco Iacurto, Jean Palardy, and the poet Hector de Saint-Denys Garneau. He attended the École des beaux-arts de Montréal from 1926 to 1934, interrupted by a trip to Paris. After teaching at the École du meuble, he moved to the École des beaux-arts in Québec in 1937, remaining there until 1965. His work drew inspiration from Québec City and from L'Îsle aux Coudres in the Charlevoix region, for which he held particular affection. His early paintings reflected daily life, portraits of relatives and familiar landscapes. He began exhibiting his work in 1931, first at the annual Spring Exhibition of the Art Association of Montreal. In 1934 he won the William Brymner Prize for artists under 35. In 1935, he began participating in the annual exhibitions of the Royal Academy of Canadian Art.

In addition to being a painter and a teacher, Lemieux also pursued a career as an art critic, writing in both French and English. Beginning in 1935, he wrote for a variety of publications, including Le Jour, Regards, Maritime Art and Canadian Art. The first French Canadian critic to remark upon abstract art, which he rejected as an abdication of the artist’s responsibility to address serious subjects (Lemieux remained a representational artist until the end of his career), he was also one of the few critics open to American art.

In the 1940s, Lemieux's major canvases, such as Lazare (1941) and La Fête-Dieu à Québec (1944), were painted in a self-consciously primitivist fresco style that was meant to embody the attitudes of ordinary people in Québec. His organization of subject and space was at that time influenced by the Italian primitivist school and early Québec folk art, which he collected avidly. By the early 1950s, Lemieux began to achieve substantial recognition for his painting. His 1951 painting The Ursuline Nuns, which depicts six stark nuns crowded into the foreground with the convent on a steep incline behind, won first prize at the 1952 Concours artistique de la province de Quebec. However, after a trip in 1954 to France on a grant from the Royal Society of Canada, he moved away from his folkloric influences, and gradually the treatment of his subjects became simplified and his style more geometric. It was not, however, a stiff geometry, for the lines still vibrate, and the colours are either transparent or pastel. Space opens up, as in Le train de midi (1956), and against a line of horizon appear hieratic figures, as in L'été à Montréal (1959). Part of and yet distinct from the background, his figures evoke a world of dream and memory. ­­

From the late 1950s through the 1960s, Lemieux’s reputation both at home and abroad increased dramatically. He had solo exhibitions in Vancouver, Toronto, Montréal, and Québec City, and was part of four biennial exhibitions at the National Gallery of Canada. In addition to being part of exhibitions of Canadian art at the Bienal of Sao Paulo, the Brussels International Exposition, the Museum of Modern Art in New York, the Tate Gallery in London, and the Musée Galliera in Paris, he represented Canada at the 1960 Venice Biennale along with Edmund Alleyn, Graham Coughtry, Frances Loring and Albert Dumouchel. In 1968, he became a Companion of the Order of Canada.

While Lemieux’s paintings of the 1960s have a classical serenity, beginning in 1970 and continuing through the end of his life, his work became markedly expressionist, and often tormented and pessimistic: reflections on war, the possibility of nuclear Armageddon, and more generally the future of humanity. Dies Irae (1982–83), for instance, has a line of soldiers in combat gear with their backs to the viewer facing down what looks like an angry mob across an expanse of snow; Anguish (1988) features a mother and son side-by-side outdoors in the night, mouths agape, eyes wild with fear, the boy’s hands clutching his ears. Lemieux’s expressionist works received considerably less critical and commercial acclaim than his earlier work. Nonetheless, two years after his death in 1990, he received an exhaustive retrospective at the Musée national des beaux-arts du Québec.

Often meditative and serious, Lemieux's art can sometimes be humorous and lyrical, as in his illustrations of Gabrielle Roy’s books. His work is regularly exhibited in Canada and internationally, and he painted a number of commissioned portraits of public figures. In 1985, Lemieux published a limited-edition bilingual collection of prints, one for each province and territory, entitled Canada-Canada.