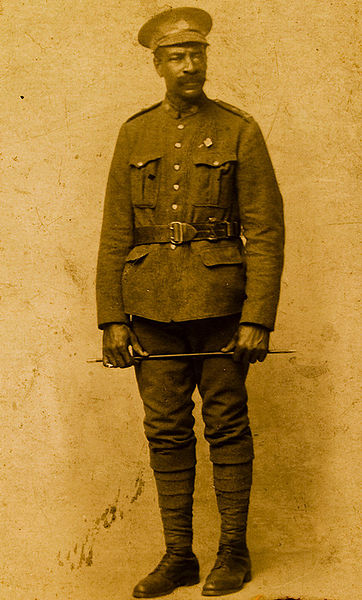 Although Black Canadian men were not altogether welcome in the armed forces, there were those who served in several combat units during the First World War. This includes the 106th Battalion, Nova Scotia Rifles, CEF, which was authorized 8 November 1915.

In June 1916, Jones enlisted with the 106th Battalion. Though he was 58 years old at the time, Jones listed his birthdate as 29 March 1877 on his registration papers, which made him 39 years old. At the time, the age limit for recruits was between 18 and 45. Over-age soldiers such as Jones — who was 13 years older than the age limit — sometimes lied about their age in order to enlist.

Jones was sent overseas and was transferred to the Royal Canadian Regiment in France. He fought on the front line during the Battle of Vimy Ridge in April 1917. During the battle, his unit was pinned down by German machine gun fire. Jones volunteered to attack the German gun position.

Jones was wounded in action at Vimy Ridge and spent a good deal of time in hospital. He was discharged in 1918 in Halifax, after being found medically unfit for military service.

He was reportedly recommended for a Distinguished Conduct Medal, an award for valour that is second only to the Victoria Cross, for his actions during the Battle of Vimy Ridge (see Medal).

As was often the case with Black soldiers, Jones’s contributions to the war went unrecognized. He and Nova Scotian Senator Calvin Ruck were friends, and for more than 10 years, Ruck tried to get the Canadian government to recognize Jones’ heroic actions, even after Jones passed away on 23 November 1950.

DID YOU KNOW?
In 1986, Calvin Ruck wrote and published Canada's Black Battalion: No. 2 Construction, 1916–1920, a history of the Black veterans of the First World War(see No. 2 Construction Battalion). In 1993, his campaign for stronger historical recognition of the battalion led to the construction of a commemorative cairn at Pictou, Nova Scotia.


During his campaign to have Jones recognized and awarded, Ruck noted that the racial conditions in Nova Scotia and Canada on the whole prevented many Black men who served in the war from being recognized or celebrated for their heroic actions in combat.

Jones’s family members and descendants continued to fight to have Jones’s heroism recognized. Marie Francis, a granddaughter of Jeremiah Jones, said that her grandfather, who family members affectionately called “Daddy Jones,” fought racism in a quiet way and always taught his grandchildren, “there’s nothing that we couldn’t do, there was nowhere that we couldn’t go.”

Sixty years after Jeremiah Jones passed away, the federal government awarded him a Canadian Forces Medallion for Distinguished Service on 22 February 2010. At the ceremony, Nova Scotia’s Lieutenant-Governor Mayann Francis said, “Private Jones served with honour, even though as a Black man he did not enjoy all the rights and privileges that White citizens did.”

On 30 March 1898, Jeremiah Jones married Ethel Edna Geraldine Cook, from Amherst, Nova Scotia. Jeremiah and Ethel were married for 42 years when Ethel died in 1940. The couple had nine children together. Well-known Nova Scotian lawyer and activist Burnley Allan “Rocky” Jones(1941–2013) was one of Jones’s grandchildren.

DID YOU KNOW?
Jeremiah Jones’s grandson Burnley Allan “Rocky” Jones spent much of his life fighting for social justice for Black and Indigenous people in Canada; he had a strong voice in the areas of human rights, race and poverty. As a lawyer, Jones focused his attention in these areas, also advocating for prisoners’ rights.

On 9 September 2000, the Last Post Fund established a new gravestone for Jones, with full military honours. In 2016, descendants of Jeremiah Jones were presented with an honourary plaque by Parks Canada, and Jones’s picture and story were a part of a special exhibit at the Halifax Citadel.

On 11 November 2017, Jeremiah Jones’s great-great-grandson, Adam Jones, laid a wreath in honour of Jones at a Remembrance Day ceremony in Ottawa.