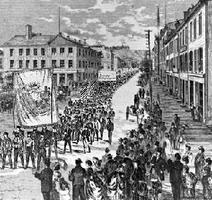 John Hewitt, cooper, labour leader, editor (flourished 1860s-90s). After extensive experience in American labour reform, Hewitt became a major Toronto labour leader. He helped found the Toronto Trades Assembly, led the NINE-HOUR MOVEMENT, and backed the labour paper the Ontario Workman. He was elected first secretary of the Canadian Labor Union (1873). He resigned as secretary of the Toronto Trades Assembly to take a Tory patronage job at the Toronto Water Works, and later was an editor of the Sentinel, the Orange Order's weekly. Hewitt's Toryism stemmed from his belief in a coalition of labour and small producing employers. While an anomaly from today's perspective, he represents the radical Tory workingman of his day.
×