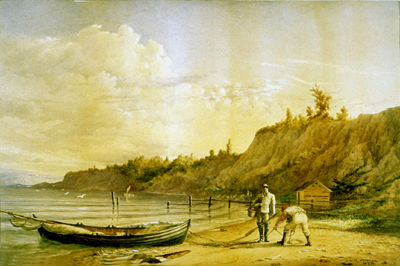 The son of a member of the landed gentry and a retired army officer from a leading Simcoe County family, Lucius O’Brien, while born in a log cabin, was raised with great respect for culture, and he exhibited an aptitude for drawing early on. O’Brien studied art under John G. Howard at Upper Canada College, Toronto. In 1853, he won two prizes in the professional category of the Upper Canada Provincial Exhibition in Hamilton, Ontario. Sketchbooks survive of drawings done in Shanty Bay and then in Orillia, where he moved in 1856. After an extended hiatus following his marriage in 1860, he began drawing scenes set around Orillia and on trips to Montpellier, France, and Bulford in Wiltshire, England, where his mother’s family owned an estate. By 1870, he had returned to Toronto.

By 1873, O'Brien was active in the Toronto art world and supported the Ontario Society of Artists, where he replaced John Fraser as vice president in 1874 and remained until 1880, replaced by Robert Harris. One of O’Brien’s significant achievements as vice president was the establishment in 1876 of the Ontario School of Art, which went on to become the Ontario College of Art and Design University. With the support of the new governor general, the Marquess of Lorne (John Douglas Sutherland Campbell), he helped organize the Royal Canadian Academy of Arts, serving as its first president (1880­), and edited Picturesque Canada (1882). Picturesque Canada was a business venture organized by two Chicago brothers. Initially advertised as consisting entirely of Canadian artists and writers, of the 540 illustrations found in the two-volume edition, less than a quarter were by Canadians and most of these were by O’Brien. After 1882, supported by the money from Picturesque Canada, he painted and taught in Toronto, living and working in a large studio and home designed by Frank Darling.

O'Brien painted widely, in Ontario and Québec, on Grand Manan Island and along the Atlantic seaboard. Sponsored by the Canadian Pacific Railway (CPR), he became one of the first artists to paint the Rockies and the Pacific coast. Many of his landscapes are distinguished by a sense of light similar to that in paintings by Albert Bierstadt and the American "luminists," and by the realism similar to that in paintings by John A. Fraser and other artists associated with William Notman’s photographic studios.

As the first president of the Royal Canadian Academy, O’Brien was required to donate a major work to their annual exhibition, the first of which opened on 6 May 1880. O’Brien’s contribution was Sunrise on the Saguenay, Cape Trinity (1880), which became one of his signature works. The painting depicts a section of the celebrated Saguenay fjord in Québec. There are two boats out in the water, but they are dwarfed by the steep, high, mist-wreathed cliffs on one side. The horizon is dominated by a horizontal smear of pale pink, representing the rising sun and mirrored on the water; the entire scene is suffused with light. While Sunrise on the Saguenay, Cape Trinity is highly poetic, perhaps symbolizing the rise of the arts in Canada, then still a young country, a painting of just a few years later, Kakabeka Falls, Kaministiquia River (1882) is a more traditionally realistic painting of the spectacular falls in northern Ontario.

In the later 1880s, O’Brien shifted his focus to watercolours, making him one of the finest watercolourists of his generation. One of his notable achievements during this period was his depiction of the Rocky Mountains and the landscape of British Columbia. A British Columbian Forest (1888), for instance, is a large scale watercolour of a two men chatting in a dense, mossy thicket of forest, the trees behind them of almost unimaginable size.