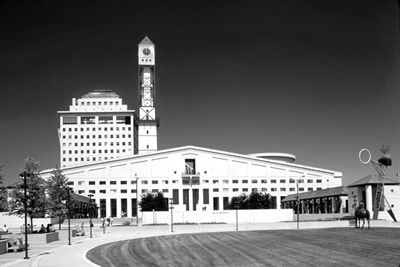 The design for the Mississauga Civic Centre was chosen through competition.
(courtesy City of Mississauga)

Mississauga City Hall, designed by Edward Jones and Michael Kirkland (in partnership as Jones & Kirkland), opened in 1987 as the civic centre for the new City of Mississauga, Ont, a merger of the towns of Mississauga, Port Credit and Streetsville. Instantly acclaimed as a success for the postmodern movement in architecture, the 37 280-square-metre landmark garnered prizes at home and abroad, including a 1990 Governor General's Award of Merit.

Postmodern architects use modern construction techniques but rely on traditional architectural forms and decoration. At Mississauga City Hall, Jones & Kirkland achieved a deft combination of European urban civic design and rural Ontario building types, merging local traditions and the grand symbols of western architectural history. They planned a narrow, 10-metre-wide building to frame a civic square with gardens, amphitheatre and fountains. Inside, the Great Hall connects on one side to the Grand Stair that leads citizens up to city offices, and on the other to the cylindrical, wood-lined council chamber. The project was designed as a "building for two seasons": the Great Hall was to be used in winter for public gatherings, the square in summer. The interiors were finished in marble and granite, while the exteriors were covered in precast concrete (which was less expensive than stone). The design also acknowledged the suburban habits of the new city's inhabitants: the complex rests on a plinth 1.5 metres above street level, on top of a 1000-car parking garage.

Jones & Kirkland won the commission in a national architectural competition held in 1982. With 246 competitors, it was one of the most important architectural events in Canada since the 1958 international competition won by Viljo Revell for TORONTO CITY HALL. The competition received widespread attention from architects worldwide, partly due to the presence of innovative British architect James Stirling on the jury. In turn, the competition's high profile helped bolster the prestige of Canadian jury members, including George BAIRD, architect and professor at the University of Toronto, and Phyllis LAMBERT, founder of the CANADIAN CENTRE FOR ARCHITECTURE.

Mississauga City Hall can also be seen as a composition of geometric shapes laid out like models for a drawing study: cylinder (the council chamber), rectangular prism (office building), obelisk (clock tower) and pyramid (the glass roof of the Great Hall). Indeed, the drawings Jones & Kirkland prepared for the competition were widely published. They made a significant Canadian contribution to an international revival of architectural draughtsmanship. This trend, popularized by postmodern architects such as Michael Graves and Aldo Rossi, focused on the communication of architectural ideas through drawing rather than building.