Moncton is founded on the traditional territory of the Mi’kmaq. Traditionally, the Mi’kmaq were a semi-nomadic people, spending spring and summer on the coasts of Atlantic Canada and fall and winter further inland. They relied on both sea and land mammals for food, clothing, dwellings and tools. They also used the forests of the region to make canoes, snowshoes and shelters. Because of their proximity to the Atlantic Ocean, the Mi’kmaq were among the first peoples in North America to interact with European explorers, fisherman and traders. As a result, they quickly suffered depopulation and displacement. Today, Mi’kmaq live in both Indigenous and non-Indigenous communities throughout New Brunswick. The Mi’kmaq community closest to Moncton, the Fort Folly First Nation, is about a 40 minute drive to the southeast.

The city's first European settlers were Acadians.They created a small agricultural community at what they called Le Coude, or "the elbow," referring to the bend in the Petitcodiac River. In 1766, settlers of German origin arrived from Pennsylvania and called their community The Bend. The city’s modern name, first used in the 1860s, honours Robert Monckton, a British commander who was lieutenant-governor of Nova Scotia during the time of the deportations. 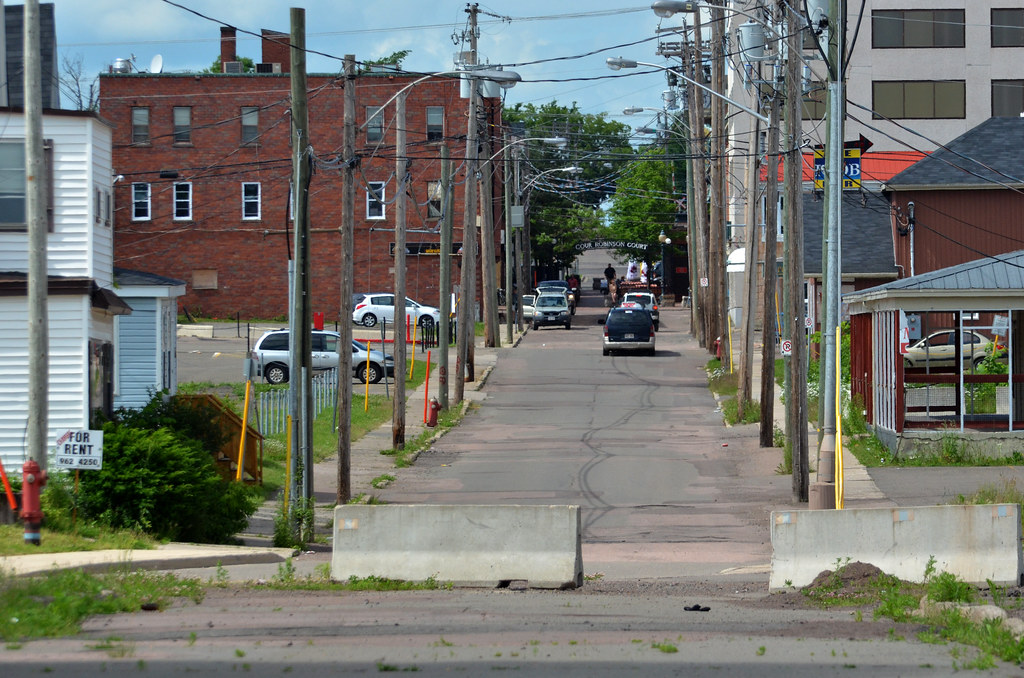 Moncton's early prosperity was closely linked to shipbuilding. The turning point in its economic history was the establishment of a shipyard by George and Joseph Salter in 1849. By 1850, the shipping trade had become important enough that Moncton was made a port of entry. The town was incorporated in 1855 with shipbuilder Joseph Salter as its first mayor. That same year the first bank, the Westmorland Bank, was established. The decline of wooden ships brought disaster to Moncton. The bank collapsed and in 1862, Moncton lost its status as an incorporated town. The beginnings of a new era, however, came with the railway, especially in the post-Confederation period when Moncton became the headquarters of the shops for the Intercolonial Railway(1871). This development led to reincorporation as a town in 1875, complete with the motto “Resurgo,” Latin for “We rise again.” Moncton became a city in 1890. 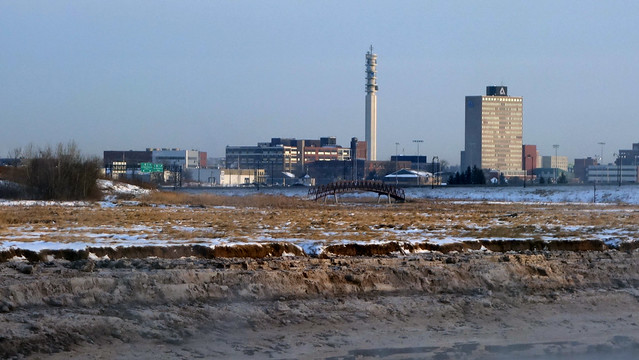 Downtown Moncton, viewed from across the Petitcodiac River at low tide. Photo taken on 17 January 2015.

Moncton is a sprawling city made-up mainly of low and mid-rise buildings. There are a few slightly taller corporate buildings downtown, such as the Blue Cross building and a number of structures that house call centres. Industrial parks span the city’s outskirts, and residential loops of newer single family houses form another, more suburban layer of the city. Despite its age, Moncton is not known for its historical structures. In 2013, the city’s motto, Resurgo, was used to name a new cultural facility, housing a museum and Transportation Discovery Centre.

Moncton has always had a strong and proud Acadian population. Despite the majority of residents being Anglophone, French and Chiac are heard daily. According to the 2016 census, 64 per cent of Moncton residents cite English as their mother tongue, and 32.5 per cent cite French. Those identifying as Canadian account for 49.5 per cent of the population, followed by French (28.6 per cent), and English (22.9 per cent). People who identify as a visible minority make up 7.4 per cent of the population, with the largest groups being Black, Arab, and Chinese.

Moncton is often referred to as "The Hub of the Maritimes" because all railway lines in and out of the region must pass through it. It is a also central point for both road and air transportation, and is relatively close to the Prince Edward Island and Nova Scotia borders. This has made Moncton a major distribution and telecommunications centre for Atlantic Canada. Irving-owned Midland Transport, headquartered in the neighbouring city of Dieppe, also drives a portion of the economy.

The Canadian National Railway was one of the city's largest non-government employers and has played a vital part in the well-being of Moncton. While CN employed as many as 6,000 workers at its peak, this number has dropped significantly since the closing of its repair shops in 1986 and their demolition in 1988. Illustrative of a shift towards a post-industrial economy, the vast CN lands have been decontaminated and redeveloped. They are now home to a technological park, sports fields and an arena complex.

A stable, bilingual white-collar workforce and the fibre optic expertise of NBTel gave the city a new role as a national telemarketing and telephone services centre in the 1980s and 90s. Call centres and shipping centres still drive a substantial chunk of the labour force.

The regional economic base is diversifying, partly due to the presence of post-secondary institutions and technical schools. Moncton’s creative industry is growing, too, with more young people opening consulting firms and working in fields like graphic design.

Moncton is the most well connected city in New Brunswick when it comes to transportation. Its airport is the largest, and generally can be relied upon to have the highest number of carriers in operation at any given time. Passenger train service still runs through the city, with trains coming through Halifax and delivering people to Quebec and Ontario. The highways that flow past Moncton bring people through to Nova Scotia and PEI, and the city and its outposts are popular with truckers who are passing through on the Trans-Canada Highway. There is also a public transportation system, Codiac Transpo, and the city has been working on its bike path infrastructure in recent years.

Moncton is run by a mayor and council, and that’s been the case since 1855, when it was still a township. The city is divided into four wards, with two city councillors representing each ward. Two councillor at large positions represent the city as a whole. Elections are held every four years. Nearby Dieppe has its own separate city council.

In 2002, Moncton was the first Canadian city to become officially bilingual. Moncton is home to Université de Moncton, a French-language university established in 1963, and the Atlantic Baptist University. Université de Moncton has the distinction of having the first law school in the world teaching common law in the French language. A campus of New Brunswick Community College is also located in the city.

The Capitol Theatre, restored to its 1922 elegance, is the venue for regular performances from Theatre New Brunswick, Symphony New Brunswick and Théâtre populaire d'Acadie. Other cultural venues include an Acadian cooperative called the Aberdeen Cultural Centre, and the facilities of Théâtre L'Escaouette. The Atlantic Ballet Theatre of Canada is a professional touring company based in Moncton.

The city hosts a number of festivals including Festival international du cinéma francophone en Acadie (with neighbouring Dieppe), FrancoFête en Acadie (for the arts) and the NorthropFryeInternational Literary Festival.

The Acadian Museum has a collection of artifacts dating back to 1604 including a book written by Samuel de Champlain. The Moncton Museum traces the history of Moncton back to when the site was the western end of a Mi'kmaq portage with Northumberland Strait. Buildings of historic importance include the Free Meeting House (1821) and Thomas Williams House (1883).

Other sites of interest in Moncton include Magnetic Hill, where cars appear to coast uphill, and the tidal bore, a small wave that travels upstream twice daily on the Petitcodiac River, heralding the arrival of the Bay of Fundy tides, the highest in the world. Magnetic Hill’s concert site, originally built for a papal visit in 1984, was revamped in the 1990s as a concert venue that would later accommodate major acts like The Rolling Stones and U2. Local musical talent includes Gabriel Louis Bernard Malenfant, member of the Chiac hip hop group Radio Radio.