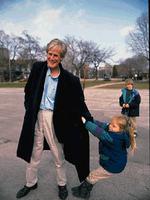 Morrison, shown with his daughter Madeleine, was fired by the CBC in April 1995 (courtesy Maclean's).

When he walked into the downtown Toronto office of CTV president John Cassaday last week, Keith Morrison was the well-travelled, 47-year-old co-host of the network's Canada A.M. early-morning show and the designated heir to Lloyd Robertson as the anchor of CTV's highly rated national news. When he walked out 10 minutes later - at the end of a meeting variously described as noisy, a shouting match and ugly - Morrison's contract, said to be worth $225,000 a year, was in shreds and he was out of a job. So what happened? "All I know," said Morrison, "is they told me to leave and I don't know why; I thought the meeting was about something else." Cassaday was noncommittal. "It was a personal matter between an employee and the employer," he told Maclean's. "Because of the human element here, I just don't want to say anything." While both sides called their lawyers, Morrison's abrupt dismissal only further stunned an ego-driven industry still unsettled by Pamela Wallin's removal three days previously as the co-anchor (with Peter Mansbridge) of CBC TV's Prime Time News. It also raised the question of who would succeed the highly respected 61-year-old Robertson, who wants to leave in the fall of next year on his 20th anniversary at CTV. Now, a strong candidate, network sources said, might be Tom Clark, the 43-year-old national editor of the Baton Broadcasting System, which owns 20 TV stations in Ontario and Saskatchewan, 11 of them CTV affiliates. "He looks good, he is very smart and he has experience," said a former senior broadcast executive. Asked if he would take the news job, the genial Clark - a fifth-generation journalist and CTV's former Beijing correspondent - said: "The simple answer is, yeah. If it were offered I would gladly accept it. But it has not been offered, and it's not something I've campaigned for."

Morrison, meanwhile, spent the week repeatedly invoking his lawyer's gag order to fend off reporters' questions. He had hired a lawyer, he told Maclean's, "probably because it's a good idea." Was he seeking to be reinstated at Canada A.M., where he had been since Sept. 1, 1992 (most recently with co-host Valerie Pringle)? "I'm not seeking anything particularly," he replied, adding that he had no plans other than "looking for a job." In Canada or the United States (where he spent six years as a news anchor at NBC's Los Angeles affiliate)? "Preferably in Canada," Morrison said. "That's why I came back here. I happen to be a gooey nationalist. I love the place, and I don't want to go away again." In the days following the meeting with Cassaday, he said, "I have been so touched by people's responses; they've been so nice to me. They're wonderful." Most of all, he said, "I don't want to get into a fight with these people at CTV. I like them too much, and I like the damned company too much."

And the company once liked Morrison, too: for one thing, it had enthusiastically welcomed him back from Los Angeles three years ago. Last June, when he was being courted by U.S. networks, CTV not only renewed his Canada A.M. contract, but virtually assured him of Robertson's job by naming him "principal backup." Network insiders, however, said last week that the relationship began to unravel in the months that followed the signing. Some say Morrison became impatient and wanted the succession to take place sooner, but Robertson flatly refused. (A spokesman for Robertson said that the anchor had nothing to do with Morrison's departure.) At the same time, Morrison's producers were becoming increasingly irritated by the amount of freelance work he was doing for NBC, principally for its prime-time information show Dateline. "This was getting on everybody's nerves," said one program official. "But he was still the president's golden-haired boy, so there was only so much they could do."

According to one informant, however, some of the affiliates were not keen on Morrison as a successor to Robertson, "and they started expressing their concern and their distaste for the deal to Cassaday. When that sort of got into play, the whole thing reached a kind of critical mass whereby it became inevitable that the deal was just not going to happen."

Gag order or not, Morrison was clearly unprepared to allow the reconstruction of his decline and fall to go unchallenged. "I wouldn't want things that aren't true to be published, and a lot of that stuff isn't," he said. "There's some fairly central stuff there that's being spun in the wrong way, and I wouldn't want it to be accepted as fact. I can't prevent people from saying whatever they want to say, but I can prevent myself from saying more than it's advisable for me to say at the present time." One example of the wrong-way spin, says a Morrison ally, is the claim that his contract prohibited him from doing freelance work for NBC.

As for Morrison himself, it was the first time in 2½ years that he did not have to get out of bed at 3 a.m. to go to work - a chore already familiar to his replacement, Dan Matheson, Canada A.M.'s sports and weather man. Morrison spent the week having lunch with old friends, gathering up his four children in the afternoon from four different schools - "it's like a postal route," he said - and staying home in the evenings with his wife, the former Suzanne Perry, a onetime press aide to former Prime Minister Pierre Trudeau.

"What do you do, watch television?"