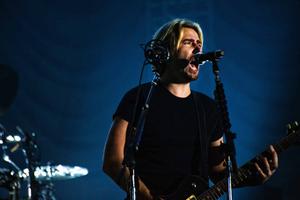 Nickelback is a rock band that formed in Hanna, Alta, with Chad Kroeger (vocals, guitar, b 15 Nov 1974 at Hanna, Alta), Ryan Peake (guitar, vocals, b 1 Mar 1973 at Brooks, Alta), Mike Kroeger (bass, b 25 June 1972 at Hanna, Alta) and Ryan Vikedal (drums, b 9 May 1975 at Brooks, Alta) and then moved to Vancouver. The band came into the Canadian spotlight with the release of its second album, The State. That record earned Nickelback a 2001 JUNO AWARD for Best New Group, was certified platinum and set the stage for its Silver Side Up successor later that year. The album contained the year's most played song, "How You Remind Me," as well as the hits "Too Bad" and "Never Again." Those songs helped propel Silver Side Up to sales of more than 10 million copies worldwide, including more than 800 000 in Canada, which made the quartet one of the most popular rock groups around the globe.

Nickelback won 3 more Junos in 2002 and frontman Chad Kroeger was named Songwriter of the Year in 2003. The band released The Long Road in September 2003 and the album rocketed instantly to the top of the sales chart, while lead single "Someday" became a multi-format smash. "Figured You Out" and "Feelin' Way Too Damn Good" picked up where that song left off, and the band embarked on an ambitious Canadian tour that hit secondary and tertiary markets as well as major cities. Nickelback received 5 Juno nominations in 2004 and captured the Best Group and Fan Choice awards. After focusing on Canada, Nickelback took its pyrotechnic-laden live show on the road to the United States, Europe and Asia. All of this activity helped The Long Road sell more than 400 000 copies in Canada and more than 5 million around the world.

Drummer Ryan Vikedal was let go from the band before Nickelback started recording its next album in early 2005, and former 3 Doors Down member Daniel Adair (b 19 Feb 1975 at Toronto) took his place for the sessions that became All The Right Reasons. The album topped the sales charts upon its release in both Canada and the US and was certified double-platinum in Canada within two weeks of its release and quadruple-platinum south of the border by the end of the year. Nickelback launched a cross-Canada tour in support of the album in early 2006, when it was nominated for 6 Junos. All The Right Reasons was named best album and Nickelback took the Best Group and Fan Choice honours, while the hit single "Photograph" was a runner-up. Nickelback won 2006 Billboard Music Awards for duo/group of the year and best rock album.