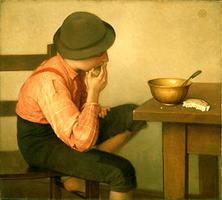 Ozias Leduc, painter (b at St-Hilaire, Qué 8 Oct 1864; d at St-Hyacinthe, Qué 16 June 1955). Leduc's interest in drawing was encouraged by a local teacher. Around 1883 he joined a Montréal statue-making firm, then became assistant to Adolphe Rho and Luigi Cappello, who introduced him to mural painting as a profession. He began exhibiting his works at the Art Association of Montreal's annual spring exhibition in 1891, and in 1892 won a prize for his painting, Nature morte, livres. Until the early 1920s his works were periodically displayed at the AAM and at annual expositions of the Royal Canadian Academy.

After working on the decorative interior of the church of St-Paul-l'Ermite (1892), he landed his first important contract, with Joliette Cathedral, where he completed a group of 23 religious paintings. During his career he decorated churches and chapels in Québec, Nova Scotia and the eastern US. His most important work includes the churches of St-Hilaire (1894-99); St-Ninian's Cathedral, Antigonish (1902-03); St-Romuald, Farnham (1905); St-Enfant-Jésus du Mile-End, Montréal (1916-19); the chapel of the Sherbrooke bishopric (1922-32); the baptistry in Notre-Dame, Montréal (1927-28); Sts-Anges-Gardiens, Lachine (1930-31); and Notre-Dame-de-la-Présentation, Shawinigan-Sud (1943-55).

His religious works are closely linked to his still-life paintings and to the landscapes inspired by the St-Hilaire region. His paintings of daily life and nature have both a symbolic and spiritual dimension achieved through flowing but concise, meticulous lines, warm and subdued colours and soft light. In this vein his 1913-21 landscapes Cumulus bleu, Fin de journée, Effet gris (neige), Pommes vertes, Neige dorée and L'Heure mauve, along with drawings from the seriesImaginations (1936-42), are among the outstanding accomplishments of his career.

As a painter of portraits and allegorical and historical figures, Leduc instilled his small works with great suggestive power. His interest in symbolism probably dated back to his brief stay in London and Paris in 1897. His writer friends, Arsène Bessette, Guy Delahaye, Olivier Maurault, Marcel Dugas, Paul MORIN and Robert de Roquebrune, as well as musician Léo-Pol MORIN, encouraged him in this direction. He collaborated with some of them to establish an art appreciation and criticism magazine, LE NIGOG, published in 1918. He also illustrated several books, including Claude Paysan (1899) by Ernest Choquette, Mignonne allons voir si la rose ... est sans épines (1912) by Guy Delahaye and La Campagne canadienne (1927) by Adélard Dugré.

Leduc was not influenced by contemporary Canadian artistic currents and trends, and he held only one important exposition, which was at the St-Sulpice Library in 1916. By helping to promote the career of Paul-Émile BORDUAS, he became quite popular late in his career. He also left many texts, poems and short reflections on art. His feelings about modern painting are expressed in the mystical thought that man lives searching for the paradise he hopes to regain through a knowledge of nature and the beauty of art.