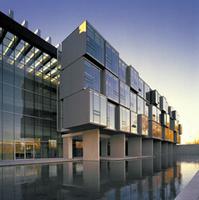 The design (Saucier + Perrotte) of the Perimeter Institute for Research in Waterloo, Ont, is inspired by the nebulous spaces occupied by theoretical physics (photo by Steven Evans).

The Perimeter Institute for Research in Theoretical Physics is an independent, resident-based, academic organization devoted to research into topics such as quantum gravity and string theory. Mike Lazaridis, the founder of RESEARCH IN MOTION (developers of the BlackBerry wireless device), first established the centre in 1999. It has evolved over the years through a unique partnership that includes the vision and personal philanthropy of Lazaridis and that of other private funders as well as involvement and public support from the governments of Ontario and Canada.

The Institute's permanent home, designed by Montréal-based SAUCIER + PERROTTE ARCHITECTES, opened in 2004. It was awarded a Governor General's Medal in 2006. The black and grey, 6000-square-metre, concrete and glass warped prism stands on a former landfill, bounded by a railway line and an artificial lake, on the edge of uptown Waterloo, Ont.

Canada has a strong tradition of research and university architecture. The Institute stands out because of its well-wrought construction details, elegant yet futuristic wall surfaces, and the strong visual links created between the interior and the surrounding environment. The design also extends the postwar tradition of combining landscape and building found in the projects of architect Arthur ERICKSON for the University of Lethbridge and Simon Fraser University. For Perimeter, Saucier + Perrotte created a setting by manipulating the natural topography. Since the water table is high, there is no basement. Instead an artificial berm rises up a full storey on the north side, making a base for the building and marking the entrance.

The centre consists of 2 separate inhabitable blocks. The ground floor is a public zone, giving access to a 205-seat lecture theatre with a soaring atrium, accented by concrete staircases and 3 bridges. There is dedicated office space in the north block, and a stack of seminar rooms in the south. Informal common spaces equipped with chalkboards and fireplaces as well as a top-floor bistro and roof deck encourage Perimeter's scientists to linger and exchange ideas. Resident researchers are housed in 44 offices composed as a series of stacked, cantilevered boxes facing north over a reflecting pool. The oft-photographed south façade, a 60-cm-thick wall clad in black aluminum panels randomly pierced with windows, forms an enigmatic symbol of the thought-provoking research undertaken inside.

The Perimeter Institute for Theoretical Physics continues to be a successful example of private and public collaboration in science research and education. Construction of the new Stephen Hawking Centre, designed by the award-winning firm of TEEPLE Architects, nearly doubles the research space at Perimeter Institute.