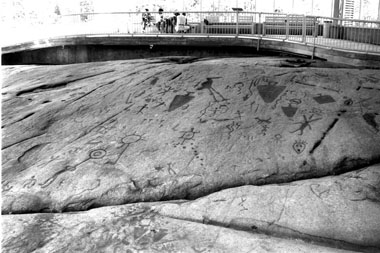 The Peterborough Petroglyphs National Historic Site of Canada, located in Southern Ontario. The Petroglyphs were carved by the Algonquian-speaking people.

Established as a historic-class park, Petroglyphs Provincial Park (established 1976, 1643 ha) is located 55 km northeast of Peterborough, Ontario. It is located on the southern edge of the Canadian SHIELD and in a transition zone between the Shield and the Great Lakes-St Lawrence Lowland area. Rocky ridges covered with thin soil are interspersed with low-lying wetlands.

Petroglyphs
Petroglyphs Provincial Park is the site of one of Canada's archaeological and cultural treasures. On a flat expanse of rock are some 900 carvings or PETROGLYPHS of symbolic shapes and figures, likely carved by Algonquian-speaking people. The carvings are thought to range in age from 600 to 1100 years old. Depicting turtles, snakes, humans and other beings and objects, the petroglyphs form the largest known single concentration of aboriginal rock art in Canada.

The petroglyphs were carved in a roughly rectangular area about 60 m by 35 m on a gently sloping, flat marble surface. Thirty-one hammerstones made of gneiss (a harder rock) were found in crevices nearby. Today the site is considered sacred by people such as the Anishinaabe, who call it Kinoomaagewaapkong, meaning "the rocks that teach."

Natural History
There is a wide diversity of trees and plant life, including large stands of red and white pine interspersed with pockets of spruce and mixed hardwoods such as white birch, sugar maple, and red oak. The park is home to a large population of white-tailed deer, as well as smaller mammals such as beaver, fisher, chipmunk, and squirrel. Many birdwatchers visit the park to see grey jays. These birds are more typically seen in areas to the north. Visitors may also see pileated woodpeckers, various warblers, northern flickers, and ruffed grouse. Bald and golden eagles can sometimes be seen in the winter.

Four trails provide an opportunity to experience and explore the rich diversity of the park: pine stands, areas of oak and birch, open areas with grasses, ferns, and exposed rock outcrops, and an ancient streambed made thousands of years ago by glacial meltwater.

Facilities
In 1984, a specially designed building was constructed over the main body of the petroglyphs. This mostly glass enclosure protects the images from the effects of ACID RAIN, algae, frost, and vandals. In 2002 a visitor centre opened. Its exhibit area features some native beliefs and their thoughts on the petroglyphs. There is also a section showing other rock art sites in the world.