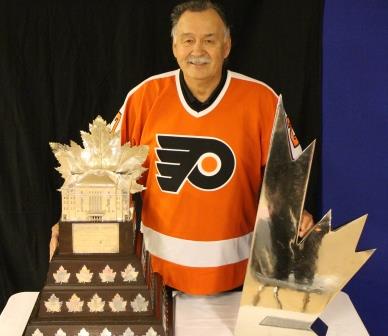 Reggie Leach was born on 23 April 1950 in Winnipeg, Manitoba. His mother, Jessie Ackabee, was from Eagle Lake First Nation, an Ojibwe community in northwestern Ontario. His father, Archie Leach, was a blaster whose younger sister lived with Jessie in a rooming house in Winnipeg. Shortly after Reggie was born, his mother made the difficult decision to send him to live with his paternal grandparents, 128 km north in Riverton. Although Archie was sending money to help care for the baby, Jessie was struggling to make ends meet and wanted a better life for her son. Reggie arrived at Reginald and Kate Leach’s home at only a few weeks old and increased the Leach brood to 13.

Early on, it was clear that Leach was a talented hockey player. By the time he was 14 years old, he had already represented Riverton at the Bantam, Midget and Juvenile levels. Although he was quite young to play senior hockey, Leach also laced up his skates to play for the Riverton Lions, the local senior team.

In 1965–66, Leach played for a Junior B team in Lashburn, Saskatchewan. Midway through the season, he grew homesick and, after returning to Riverton for the Christmas holidays, decided not to return. He played out the rest of the season with his old teams in Riverton.

However, at the urging of his mentor, Siggi Johnson, a local businessman and minor league coach, Leach relocated more than 700 km to play for the Flin Flon Bombers during the 1966–67 season. During his years with the Bombers, Leach worked for the Hudson Bay Mining and Smelting Company, which subsidized the hockey club. It was also in Flin Flon where he first met Bobby Clarke, the son of a local miner. The two became fast friends and formed a bond that continued throughout their careers. In an interview in 2016, Clarke recalled that the two were “instantly compatible” on and off the ice and were “practically inseparable.”

The next year (1968–69), Leach continued to impress, scoring 36 goals in his first 21 games. Unfortunately, he separated his shoulder and broke his collarbone early in the year and was sidelined for the remainder of the regular season. He returned to action in the playoffs to help the Bombers clinch the league title.

Leach finished his junior career with the Bombers in 1970 with 255 regular-season goals and 146 assists. He won the WCJHL Player of the Year award that year as league MVP. Leach ranks third all-time in the Western Hockey League in playoff goals with 41.

In 1970, the Boston Bruins selected Leach third overall in the NHL amateur draft. While Leach made the Bruins team out of training camp, the club was loaded with talent and he found himself on the bench more often than on the ice. As a result, the team sent Leach to the Bruins’ Central Hockey League affiliate, the Oklahoma City Blazers, so he could play more regularly. He was called back up to the big club in mid-January 1971 after an injury sidelined John McKenzie. Even after McKenzie returned, the Bruins opted to keep Leach in the NHL rather than send him back to Oklahoma City.

The following season (1971–72), Leach found himself on the bench once again. After expressing his frustrations to his coach, he was dealt to the California Golden Seals along with Bobby Stewart and Rick Smith. While Leach gained more ice time in Northern California, the Seals were not a competitive team and usually found themselves on the losing side.

At the end of the 1973–74 season, Leach received word that he had been traded to the 1974 Stanley Cup champions, the Philadelphia Flyers, where his good friend Clarke was the team captain. Leach, Clarke and Billy Barber formed the formidable “LCB Line,” which wreaked havoc on teams across the league. In his first season with the Flyers, Leach scored 45 goals, nearly twice what he had scored with the Golden Seals the previous season. The Flyers won the Patrick Division that year and went into the 1975 playoffs prepared to defend their championship title. After a hard-fought seven-game series against the Islanders in the semifinals, the Flyers beat the Sabres in the Final and Leach achieved his childhood dream of winning the Stanley Cup.

The next season (1975–76), the Flyers finished second in regular-season standings with 118 points. The LCB line continued to dominate, scoring 141 goals and 322 points. Leach scored 61 of those goals, including 51 at even strength. More than 40 years later, it remains a franchise record for most goals in a season. Thinking back to Leach’s milestone season, Clarke believed that Leach “didn’t score many goals by luck; that was from ability.” He recalled that there were a number of players who could shoot hard, like Bobby Hull, but none of them possessed Leach’s accuracy. For Clarke, Leach “could shoot the heck out of the puck but remain deadly accurate.”

The Flyers made it to the Stanley Cup Final in 1976 but were swept by the Montreal Canadiens. Despite the team’s loss, Leach equalled and set new NHL benchmarks throughout the 1976 post-season. On 6 May, he notched five goals in the deciding game against the Boston Bruins in the Conference Finals, tying the previous record shared by Newsy Lalonde (1919),  Maurice Richard (1944) and Darryl Sittler (April 1976). Leach also set a new record for the longest consecutive goal-scoring streak in a single post-season, scoring in 10 straight games. In total, Leach scored 19 goals in 16 playoff games. His impressive campaign earned him the Conn Smythe Trophy as the most valuable player in the Stanley Cup Playoffs. Leach is the only non-goaltender in NHL history to win the award as a member of the losing team. His 19 post-season goals are still a league record (Jari Kurri of the Edmonton Oilers tied the record in 1985, scoring 19 goals in 18 games — two more games than Leach).


Leach continued to rack up the goals for Philadelphia and was part of the longest undefeated streak in league history: 35 games (25 wins and 10 ties) from 14 October 1979 to 6 January 1980. He reached the 50-goal milestone again that season and added nine more goals in the playoffs. Philadelphia once again made it to the Stanley Cup Finals in 1980 but came up short against the New York Islanders, who captured their first of four straight championships.

Leach played another two seasons in Philadelphia before he was released from his contract in 1982. During his time with the Flyers, Leach racked up 306 goals and 208 assists. His career goal total with the Flyers ranks him seventh all-time in franchise history.

Leach ended his NHL career with the Detroit Red Wings in the 1982–83 season. When he exited the league, his trophy case included a Stanley Cup, the Conn Smythe Trophy and two All-Star Game appearances (in 1976 and 1980). Although Leach knew his NHL career was over, he was not quite ready to hang up his skates. In the 1983–84 season, he played for the Montana Magic, a minor professional team in the Central Hockey League.

In 1976, Leach was selected to represent Team Canada at the Canada Cup. While he did not dominate the scoreboard as he had with the Flyers that season (he scored one goal and assisted on another), Leach told author Mike Commito in 2016 that it was one of the greatest moments in his life: “Here I am, a little Native kid out of Manitoba, getting to play with the best players in Canada and playing against the best players in the world.” Canada played Czechoslovakia in the Final and clinched the gold medal in Montreal.

While playing junior hockey and working in Flin Flon in the 1960s, Leach met Isabel Hunter. The two had a son, Jamie, and a daughter, Brandie. Jamie followed in his father’s footsteps and played parts of five seasons in the NHL, winning a  Stanley Cup with the Pittsburgh Penguins in 1992. They are the only First Nation father-and-son duo to have their names engraved on the Stanley Cup. Brandie also excelled in athletics and made the Canadian women’s lacrosse team, playing in the World Cup in 1993.

Toward the end of his professional hockey career, Leach battled alcoholism, often at the expense of his personal and professional life. After his marriage to Hunter failed, Leach checked himself into rehab in 1985 and has been sober ever since. He lives with his second wife, Dawn, in Aundeck Omni Kaning First Nation on Manitoulin Island, Ontario .

In 2006, Leach opened the Shoot to Score Hockey School with his son, Jamie. The school runs hockey development camps in communities across the country. Leach prides himself on using the lessons he learned — both in hockey and life — to make a difference in the lives of the children he meets through the school. As Leach told Commito in 2016, “I am more proud of what I did after hockey. It was just a stepping stone for what the Creator wanted me to do after.” Leach and his son reach more than 2,000 children every year and often work with First Nations communities.

Some believe that Leach’s resumé and personal story merit his inclusion in the Hockey Hall of Fame. He has been the subject of many petitions advocating for his induction, as well as a song by Canadian musician John K. Samson of The Weakerthans. Whether or not Leach is inducted, he will always be regarded as one of the premier snipers of his day and one of the best Indigenous players to have played in the  NHL.