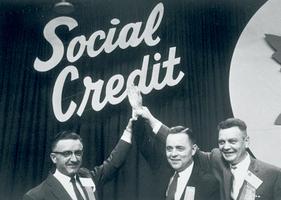 Robert Norman Thompson, politician, teacher (b at Duluth, Minn 17 May 1914; d at Langley, BC 16 Nov 1997). He came to Canada in 1918, was educated in Alberta, taught school, practised chiropractic and served in the RCAF (1941-43). He spent many years following the war teaching and administering education programs in Ethiopia. His prominence in Canadian politics began in 1950 when he was elected president of the SOCIAL CREDIT Assn of Canada. In 1961 he became national leader of the Social Credit Party. He was elected to Parliament in 1962 for Red Deer, Alta, and returned in 1963 and 1965. In these elections the Social Credit Party, with Réal CAOUETTE as deputy leader, had enough success to help prevent the Conservatives or Liberals from winning a majority.

Thompson resigned as Social Credit leader in Mar 1967, citing lack of support from provincial party organizations. In 1968 he joined the Progressive Conservative Party and retained his Red Deer seat in Parliament. He left politics in 1972 to teach political science at Trinity Western Coll, Langley, BC.

He has been chairman of the board and headmaster at Fraser Academy, Langley, a school for students with dyslexia; chairman of a foundation set up by his family to raise and distribute funds for charity; and president of Vanguard Institute, which researches political aspects of Canadian economics. Thompson published his political memoirs, A House of Minorities 1957-72, in 1990, the same year he was named an Officer of the Order of Canada.