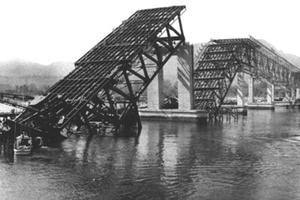 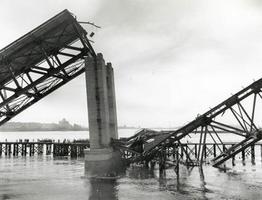 Span number 5 (right) collapsed first, tilting the pier and leading to the collapse of span number 4. 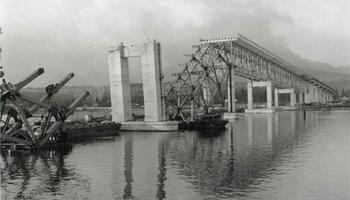 View of the collapsed spans of the Second Narrows Bridge, Burrard Inlet, Vancouver. 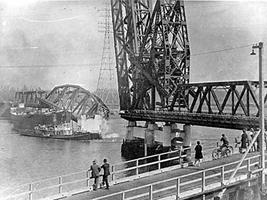 View of the old Second Narrows Bridge after the ship Pacific Gatherer ripped away its centre span. The bacule is visible on the centre-right (courtesy Vancouver Public Library/3115). 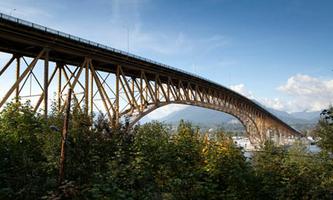 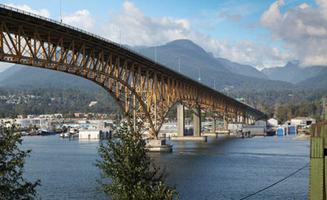 On June 17, 1958 two spans of the Second Narrows Bridge, then under construction, collapsed into Burrard Inlet, killing 19 men in what remains the worst industrial DISASTER in VANCOUVER's history.

Quick Facts on the Bridge

History of the Second Narrows Bridge

The first BRIDGE across the Second Narrows of Burrard Inlet was completed in 1925. It provided access for cars and trains, but its bascule (a pivoting section that is raised and lowered using counterweights to allow ships to pass) proved problematic. The bridge was hit numerous times by ships: by the freighter Eurana in 1927, by the Norwich City in 1928, and by the Losmar in 1930. In September 1930 the Pacific Gatherer got wedged under the bridge and ripped away its centre span. The bridge was sold to the provincial government in 1933, repaired and reopened in 1934, with the bascule replaced with a centre lift span. Traffic interruptions were legendary on this bridge. In 1952, for example, some 28,000 boats passed under the bridge, requiring the lift to be raised over 5000 times. (A larger lift bridge was built immediately to the east of the original bridge in 1968 and the old bridge was removed in 1970.)

Various options were considered to relieve the growing traffic problem, including a causeway, but the provincial government decided on a new bridge at Second Narrows. It would be located just west of the old Second Narrows Bridge. The bridge was designed by Swan Wooster Engineering Co. Ltd. Construction would be a "deck type" cantilever, with the roadway supported by steel. Kiewit-Raymond were contracted to build the piers and the Dominion Bridge Company to build the steel. DB had built many of Vancouver's early landmarks, including the Hotel Vancouver, the Patullo Bridge and the LIONS GATE BRIDGE. The consulting engineer in charge of the bridge was Murray McDonald.

Collapse of the Second Narrows Bridge

The collapse occurred near quitting time on June 17, 1958. At about 3:40 pm ironworkers toiling 40 metres above the inlet heard a horrific noise as Span 5 began to crash into the inlet in a mass of tangled steel. The momentum dislocated the columns of Pier 14, causing Span 4 to lose its grip and tumble into the sea. Seventy-nine workers fell. Among the 19 dead were 14 ironworkers, 3 engineers, a painter and a commercial diver who died a few days later when he drowned trying to recover a body. Twenty others were seriously injured.

After the disaster, a Royal Commission determined that the reasons for the failure were complex, involving a faulty engineering calculation on a temporary support, or "falsework." (The term "false" refers to the fact that the structure was removed once the span reached the next pier and became self-supporting.) The design for the Span 5 falsework was done by engineer John McKibbin, who made several errors that were not caught by the engineer in charge Murray McDonald. The historian of the bridge disaster, Eric Jamieson, has noted, however, that McKibbin's role in the collapse was only one factor - others included questionable steel quality and lax engineering practices. McKibbin was killed in the collapse.

In 1994, the bridge was officially renamed the Ironworkers Memorial Second Narrows Crossing to honour all the workers (including 4 others) who lost their lives during its construction. On June 17, 2008, on the 50th anniversary of the collapse, the Ironworkers and WorkSafeBC partnered to honour the memory of the dead workers in a ceremony. There have been a number of tributes to the fallen workers, including a song composed by "Stompin" Tom Connors, "The Bridge Came Tumbling Down," Jimmy Dean's ballad "Steel Men," and Gary Geddes' book of poetry, Falsework.