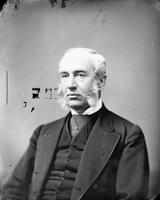 Sir Alexander Campbell played an advisory role in Confederation, participating in the Charlottetown Conference in September 1864 and the Québec Conference in October 1864. He is often considered to be a Tory fixer who acted as Sir John A. Macdonald’s right-hand man. His later achievements as a Cabinet minister were relatively minor but some of his administrative decisions had wide ramifications. Campbell was a Conservative campaign manager during the Pacific Scandal and justice minister when Louis Riel was captured in 1885.

Alexander Campbell’s family moved to Lower Canada in 1823 when he was one year old. They initially settled in Montréal, before relocating to nearby Lachine. The family finally settled in Kingston, Upper Canada, in 1836.

Though Campbell’s family was Anglican, he and his brother received their early education at the Roman Catholic Séminaire de Saint-Hyacinthe in Lower Canada. While attending the seminary, Campbell developed his French language skills, which later aided him in public life. When his family moved to Kingston, he attended the Midland District Grammar School.

Campbell initially went to the office of Henry Cassady — the second mayor of Kingston — as a law student, but when Cassady died in 1839, Campbell became, at age 17, John A. Macdonald’s second articled student. (Macdonald’s first articled student was Oliver Mowat.) When Campbell was admitted to the bar in 1843, he practised law as Macdonald’s partner. The partnership dissolved on extremely unpleasant grounds in 1849, as both men’s interests shifted to politics.

Beyond politics, Campbell served as dean of the faculty of law at Queen’s College in Kingston (now Queen’s University), and his business interests included various railway companies, insurance companies, banks and mining interests.

Alexander Campbell’s political career began on Kingston’s city council, where he was the alderman for Victoria Ward from 1850 to 1852 and again in 1864.

Campbell was a force in Kingston politics and, in 1858, moved from local to provincial politics after he was elected to the Legislative Council of the Province of Canada for Cataraqui district by a large majority. In 1861, John A. Macdonald asked Campbell to join his cabinet, but he would only do so if other members of the old Tory guard were also included. Macdonald did not comply with that request. Campbell later served as Speaker of the Council for about four months in 1863.

In 1864, when Adam Johnston Fergusson Blair had failed to form government, Governor General Lord Monck asked Campbell to form government but he also failed. Though the failure is partially attributed to Campbell never developing into a major political leader, he still remained in Legislative Council. From 1864 to 1867, he served as commissioner of crown lands.

Campbell’s administrative style was conscientious, legalistic and frugal, but he was dismissive of popular politics. He was never seen as a threat to Macdonald on a leadership level. Instead, Campbell was an ideal political lieutenant: useful, safe and able. He largely managed Macdonald’s election campaigns — especially after he became prime minister.

Alexander Campbell attended the Charlottetown and Québec Conferences as a member of the Great Coalition (1864–67) and was thus a Father of Confederation.

Campbell was acutely aware of the changes taking place during the era leading up to Confederation, particularly the unrest in the United States and British North America’s changing relationship with Great Britain. He saw the conferences as an opportunity to influence thought in the country while examining alternatives for the future. He was a staunch advocate of Confederation, which he pushed in the Legislative Assembly.

As campaign manager for the Conservatives in 1872, Campbell was embroiled though not directly implicated in the Pacific Scandal — in which Macdonald took election funds in exchange for the contract to build the Canadian Pacific Railway. When called to testify at a royal commission of inquiry into the scandal in 1873, Campbell pleaded ignorance. He became less involved in party management after the Conservatives suffered defeat in the 1874 general election.

After Louis Riel surrendered to Canadian authorities in 1885, Campbell argued that he should not be tried in Winnipeg but “should be sent under safe guard to Regina, and there be tried […] under the North West Territories Act.” Under that legislation, a defendant was not granted the right to be tried by a mixed anglophone–francophone jury. Since francophone communities were more sympathetic to Riel, it is argued that the change of trial venue all but guaranteed a favourable outcome for the Macdonald government and ensured Riel’s execution.

He left the Senate in 1887 to become lieutenant-governor of Ontario and held his position until he died in 1892.

Sir Alexander Campbell is largely remembered for being part of a coalition that grew out of Kingston, composed of himself, Sir John A. Macdonald and Sir Oliver Mowat. They formed an amazing constellation in Canadian politics and history; despite personal feuds they remained intimate associates throughout their political careers and their lives. Campbell is known as a confidant who advised the prime minister and who worked tirelessly as a political manager for the Conservative party. This made him a major political figure in backroom dealings of the time.