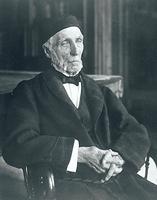 Smith was convinced that Canada was not viable as a nation (courtesy Library and Archives Canada/PA-29624).
Goldwin Smith, "Annexation" to his opponents, historian, journalist (b at Reading, Eng 13 Aug 1823; d at Toronto 7 June 1910). An acknowledged historian and journalist when he settled permanently in Canada in 1871, Smith became best known to Canadians as the advocate of union with the US as a prerequisite to moral unification of the Anglo-Saxon race. Smith was educated at Eton and Oxford, where his liberal stand against the conservative Tractarian movement led to his appointment to 2 royal commissions on the university. He befriended Richard Cobden and John Bright of the Manchester School, who taught that abolition of tariffs and introduction of free trade between nations would lead to interdependence and make war impossible. Smith supported this creed, derived from Adam Smith, in contributions to the Morning Chronicle, Daily News and Saturday Review. In 1858 he was appointed Regius Professor of Modern History at Oxford, and in his Lectures on Modern History (1861) preached the gospel of the "invisible hand": man as an economic being wresting a living from nature is in an unfallen world which, naturally harmonious, should be left unregulated.

In 1866 Smith resigned to nurse his ailing father. After his father's death, Smith moved to the US to teach at Cornell. He settled in Toronto in 1871 to be near relatives. In 1875 he married Henry Boulton's widow and moved into THE GRANGE, where as a self-declared bystander he wrote extensively on Canadian and international affairs. Initially he supported the CANADA FIRST movement, but its collapse convinced him that Canada was not viable as a nation - a view he expressed in Canada and the Canadian Question (1891). As a journalist Smith wrote for the Liberal, the Nation, the Canadian Monthly and National Review, the Week, which he founded in 1883 with Charles G.D. ROBERTS as literary editor, The Bystander and the Weekly Sun. He opposed Canadian participation in the SOUTH AFRICAN WAR and the imperial federation movement. His Reminiscences and a selected Correspondence were published after his death.