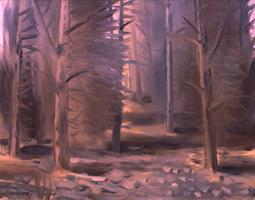 Stanley Cosgrove, painter (b at Montréal 23 Dec 1911, d there 28 April 2002). Cosgrove studied at Montréal's École des Beaux Arts from 1927 to 1931 and at the Art Association of Montréal under Edwin HOLGATE in 1935. He subsequently worked with the great Mexican muralist Jose Clemente Orozco on a mural commission for the Hopital Jesus de Nazareno in Mexico City.

In 1953 Cosgrove received a Canadian government fellowship to continue his studies in France where he fostered an early interest in the work of the French painters Braque and Rouault. Throughout the 1950s and 1960s Cosgrove was involved in other pursuits besides his painting. These included textile design and the promotion of fresco painting in public buildings. During this time, too, he was commissioned to execute a fresco mural for the Collège de Saint Laurent outside Montréal.

Cosgrove's oeuvre centered on the human figure, still-life and a distinctive treatment of the Canadian landscape. His best work was characterized by a sureness of line that was most evident in his figure work. The artist's landscapes were profound meditations that were noted for an inner stillness and quiet. Cosgrove spent most of his career teaching at the École des Beaux Arts and exhibiting his much-admired work. His paintings are found in many important public Canadian collections including those of the NATIONAL GALLERY, the ART GALLERY OF ONTARIO and the ART GALLERY OF GREATER VICTORIA.